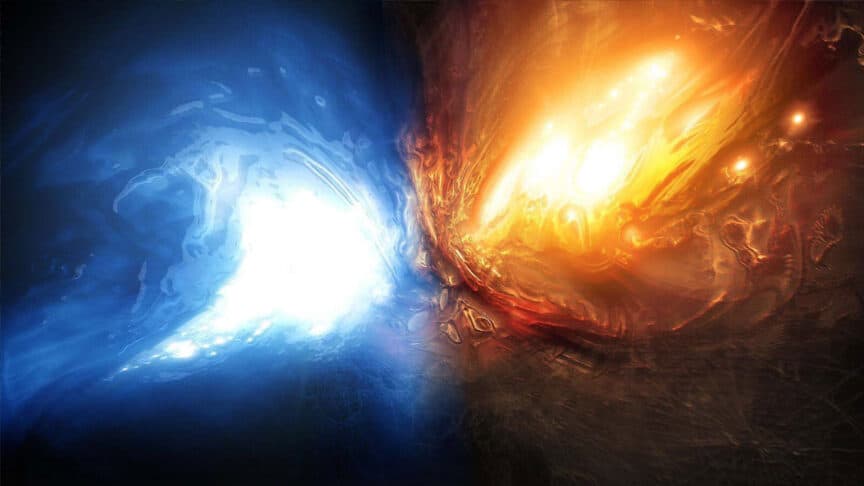 Ginnungagap is the great yawning void of emptiness that existed before the cosmos was created in Norse mythology. There was nothing in the beginning, only darkness.

It was the earliest time when Ymir lived. There was no sand, nor sea, nor cold waves, nor earth, nor sky, nor greenth, only Ginnungagap. Völuspá, stanza 3.

Ginnungagap consists of two words put together, ginnunga, and gap. The Old Norse word gap means the same thing as it does in modern-day English. However, the meaning of ginnunga is uncertain, the Dutch scholar of Germanic linguistics and Germanic mythology, Jan De Vries suggested that it could possibly be interpreted as meaning “magically-charged”.

Suddenly, from one moment to another, two enormous lands began to form, Niflheim in the north, and Muspelheim to the south of Ginnungagap.

Niflheim was a cold and dark place, nothing could grow there, and it consisted only of ice, snow, and frost. It was here that the two beings, Audhumbla, and Ymir would shape the fate of all beings.

To the south in Muspelheim, the air was filled with soot, and it was so hot that the lava was igniting itself, sending huge flames of fire up into the nothingness.

The two opposite elements met in the middle of the great gap, the glowing blistering hot sparks of fire flew out of Muspelheim and melted the dense ice at the edge of Niflheim, which resulted in a being coming into existence.

According to the Völva in the poem Völuspá, the creation and the end of the cosmos have happened for eons, and it will continue to do so. The cosmos will once again collapse into a big void of magically-charged nothingness.