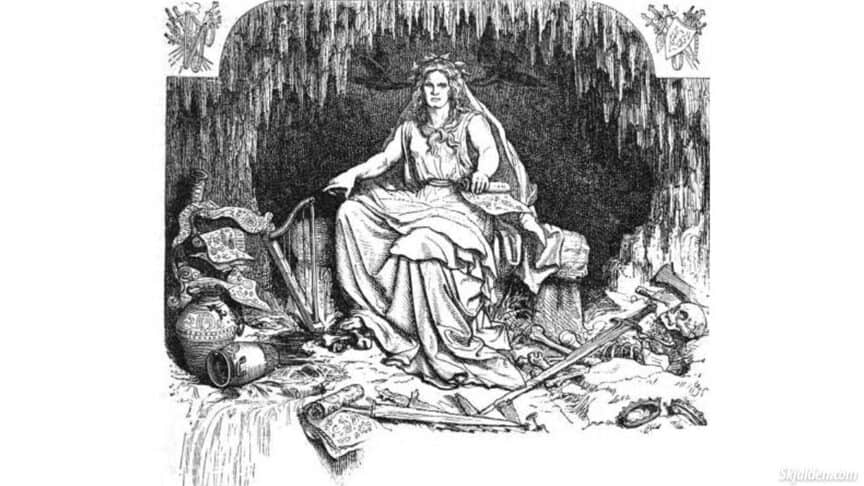 In Norse mythology, Hel is the queen of the realm of the dead. Every single person who dies from an illness, age, or is considered a coward or dishonorable by the Gods and Goddesses will end up in her realm called Helheim. This in relation to the Viking Age, meant if you didn’t die in battle you would simply just go to Hel.

Hel is a jötunn, and she is the daughter of the trickster Loki and the giantess Angrboda. She has two siblings, the world serpent also known as Jörmungandr, and the Fenrir Wolf. They have no relationship with each other and roam in separate places in the world.

Hel is definitely not a goddess, and it is a misconception when people assume that she is the goddess of death. She is not mentioned once as a goddess in any of the Edda’s which are considered the prime sources of Norse mythology.

While her father Loki could be considered a demi-god, because he is a half jötunn (jötunn is singular for jötnar) and half áss (áss is singular for Aesir), she has no status among the gods and is not recognized by anyone as such.

Her appearance is described as being half flesh-colored, just like a living human being, and half blue. Her personality traits are described as threatening, harsh, and cruel.

The Old Norse word Hel, which in Old English is Hell, derives from the Indo-European word Kel. Therefore, both of the words can be translated into “hide” or “cover” in modern English.

It was Odin the chief of the Aesir who threw Hel down from the sky into the depths of the underworld. Hel then made the underworld into her own realm and crowned herself Queen of Helheim.

Helheim also called Hel is surrounded by a tall fence, and the river Élivágar flows right next to the entrance. The gates of Hel are called Corpse-gates (Old Norse: Nágrindr) and they are located in the Gnipa cave (Old Norse: Gnipahellir), where the dog, named Garmr which means Hellhound, is howling every time new people arrive. According to Jackson Crawford’s translation of the Poetic Edda, the dog Garmr could also be Fenrir because both of them are described as chained up.

The dragon Nidhogg (Old Norse: Níðhöggr) is always nearby chewing on one of Yggdrasil‘s roots when the dragon hears the howling from the dog, it comes flying into the cave to suck the blood out of all the dead people, so they become completely pale.

When all of the blood has been sucked out of their bodies, it is easier for Hel to get them into her army of the dead. The army will at Ragnarök embark on the ship Naglfar which has been built by using the nails of the dead. Hel and her army will then set sail for Vigrid, where the final battle to end all battles will take place.

Hel has a huge hall, and inside her hall, everything has names associated with misfortunes. For instance, her dining table is called hunger and the knives are called starvation. In her bedroom, she has her bed called sick-bed, encapsulated with curtains called misfortune.

The one and only myth featuring Hel, is the poem, the death of Baldur. In this, Hermód the brave volunteered to ride down into the darkness for nine days on Sleipnir to bring Baldur back from the dead. When he came to the river Gjöll, one of Élivágar’s eleven rivers, he had to cross the Gjöll Bridge into Helheim.

But he was stopped by the maiden Módgunn who demanded that he explain what he wanted before he was allowed to pass. When he met Hel in her realm, she would only agree to let Baldur return with him, if every last thing in the universe would weep for him.

Everything did weep, except a giantess named Þökk, no matter what the Aesir did, she refused to shed a single tear for him. It is believed that this was Loki in a disguise, and another one of his tricks to ruin everything for the Aesir. Because of this, the Aesir failed to get him back from the dead, and Baldur will stay in Helheim until Ragnarök.

The pagan version of hell is not the same as the Christian version where you get tortured and punished. When Baldur arrived at Hel, he was welcomed as a guest of honor, and he was served fresh food. You will, at least, in the case of Hermód be allowed to enter and leave again, if you are not dead.

What the people during the Viking Age really thought of Hel has mostly been lost, and even Snorri Sturluson‘s descriptions of her have most likely been influenced by his own Christian faith.