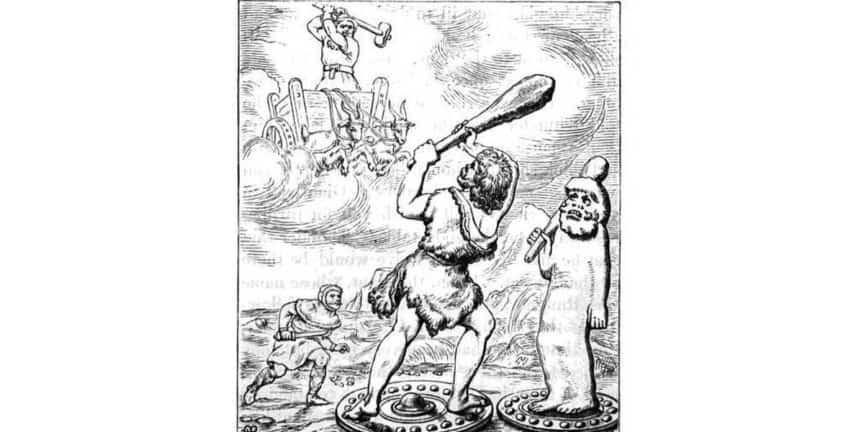 Bragi said to Aegir, many seasons ago, Thor had traveled into the east to fight the trolls,

Odin rode on his horse Sleipnir into the land of the giants, here he met the giant named Hrungnir.

Hrungnir had seen Odin from a great distance because Odin was equipped with his shiny golden eagle helmet. When Odin came closer he asked him, who are you to travel on such a fine horse in the sky and over the sea?

It is indeed a fine horse, and I bet my head that there is no horse as fine as Sleipnir in your lands. Hrungnir answered, your horse is good, but I have a horse myself called Gullfaxi, and my horse is much faster than yours.

I will teach you not to brag and lose your temper, Hrungnir jumped onto his horse and raced after Odin.

Odin yelled out a few words and his horse galloped so fast that he always was one hill or corner ahead of the giant. Hrungnir was in such a fury, that he had lost track of time and had traveled a huge distance, and suddenly found himself in the middle of Asgard.

While sitting on his horse outside of the great hall, the Aesir invited him inside to a drink. While walking into the hall, Hrungnir impatiently said give me the drink now.

The Aesir brought out Thor’s drinking bowls, and the giant was so thirsty that he emptied them all, the drunker Hrungnir became the more he boasted.

I can lift up Valhalla and take it to Jotunheim if I want, I will destroy Asgard and kill all the Gods, except Freya and Sif, they will come with me to my home. When Freya went to serve him more mead, he said, I will drink all the mead in Asgard.

The Aesir started to become tired of hearing his boasting so they called on Thor. Thor who dislikes giants more than anything quickly came to the hall, and with his hammer Mjolnir raised in the air he shouted who has allowed this giant to drink in Valhalla and why is Freya serving him mead.

Hrungnir looked at Thor with disrespect in his eyes, it is Odin that invited me into the hall for a drink. Thor who was on the brink of exploding in anger said, You will regret accepting that invitation.

Hrungnir replied, there is little honor in killing me when I am unarmed, but you can test your courage if you dare and fight me at the border of the rocky fields Grjotunagardar (Courtyards of rocky fields).

It was very unwise of me to leave my weapons at home, if I had them here, we could have tested each other’s strength in a duel. It will be a betrayal of the Aesir and cowardly of you if you choose to kill an unarmed giant. No one had ever challenged Thor to a duel before, so he let Hrungnir ride back to the land of the giants.

When the giants heard what had happened they felt there was much at stake in this duel, and since Hrungnir was their strongest, they would have little hope against Thor if he was killed.

So they built a giant man from the clay at Grjotunagardar, he was 50 km tall and almost 17 km wide. They had trouble finding a heart for this giant clay man, but they took one from a mare, but this heart started to become unsteady as soon as Thor arrived.

The giant Hrungnir had a heart that was famous, it was as hard as a rock with three sharp-pointed corners. His head was also made from stone and so was his shield which was wide and thick.

Holding his shield in front of him, he waited at the rocky fields for Thor. In his other hand, he had a whetstone as a weapon.

Right next to him was the terrified clay giant which had been given the name Mokkurkalfi. It is said that he wet himself at the sight of Thor.

Thor who was accompanied by his servant Thjalfi went to the dueling ground. The little boy Thjalfi ran ahead to where Hrungnir stood and said to him; You stand unprepared, giant, holding your shield in front of you. Thor has seen you. He is traveling underneath the earth and will attack you from below.

Hrungnir then shoved his shield under his feet and stood on top of it, now holding his whetstone with both of his hands.

Dark clouds started to appear in the sky and flashes of lightning with enormous claps of thunder.

Then he saw Thor rushing towards him in divine rage, but Thor was still a long distance away, Thor raised his hammer and threw it at Hrungnir.

Mjolnir had hit the giant in the middle of his head and smashed his skull into small pieces. Hrungnir fell on top of Thor and landed so one of his legs was lying across Thor’s neck.

Meanwhile, Thjalfi had attacked Mokkurkalfi who was such an easy fight that it is hardly worth a story.

Thjalfi then went to help Thor and tried to lift the Hrungnir legs off him, but he could not even move it an inch.

In the evening when Odin’s ravens returned home to Asgard, they told him what had happened. So all the Aesir went to the rocky fields to help Thor, but they were unable to lift the leg.

Later that day Magni one of Thor’s sons who was only three years old, together with Jarnsaxa arrived at the field. I am the sorry father that I have come this late, Magni pushed off the giant’s leg and said If I had met him, I would have killed him with my fist.

Thor stood up and brushed the dirt off his clothes, and said you will one day become very powerful and I want you to have the horse Gullfaxi which had been Hrungnir’s horse.

Then Odin said, you should not give such a fine horse to a son of a giantess, instead you should give it to your own father.

Thor returned back to his home in Asgard called Thrudvangar, still with the whetstone that remained stuck in his head.

The Aesir sent word to the seeress called Groa, she is the wife of Aurvandil the bold. While Groa was using her magic to try and loosen the whetstone, Thor told her the story of his return from the north, and how he had wandered across the frozen river Elivagar, carrying Aurvandil on his back in a basket back from Jotunheim.

He said that one of Aurvandils toes had stuck out from the basket so it had become frozen. Thor had broken it off and thrown it up into the sky, so it became the star called Aurvandil’s toe.

Your husband is traveling home as we speak, so it will not be long before you see him again. This made Groa very happy, so she couldn’t remember the words for her magic and the whetstone remained stuck in Thor’s head.

And this is why you should never throw a whetstone across the floor because then the whetstone in Thor’s head moves.