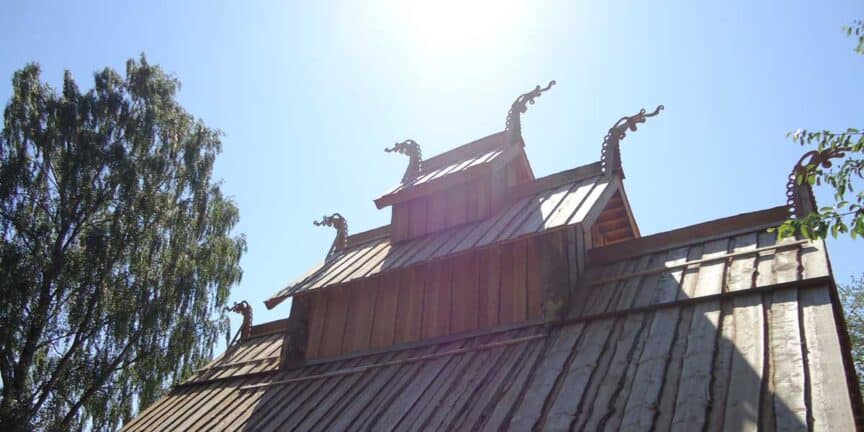 In Denmark on the island of Fyn in a very small village called Korinth, it has the first Ásatrú temple been built in 1,000 years in Denmark. The temple has been built in a Nordic style with dragon heads just like they have on Norwegian stave churches, the temple is only made from wood, and inside the temple there stand four large tree trunks that weigh almost two-ton apiece. These four tree trunks are of course from ash trees, which is the same wood as the world tree Yggdrasil is made of.

In Iceland, there is also a similar project underway to built a Ásatrú temple, and I personally look forward to seeing it one day myself. When I was at the Ásatrú temple in Korinth, it was a sunny day with a blue sky, as if the Gods smiled down on us with joy to see us connecting with our old faith and our roots.

There is not a high priest nor an authority in Ásatrú, where you have to seek permission to built a temple. In fact, there are very few rules in Ásatrú, and many interpret the faith in their own way. Once I was asked by a guy from Africa if he could be a part of the faith? My answer to him was, Ásatrú is not about where you were born, what skin color you have, or for that matter your sexuality. We have to keep in mind that the Vikings were always open-minded and friendly towards strangers, and welcoming “outsiders” who wanted to be a part of their faith and society. This is not only reflected in the culture of the Nordic countries, but also in the old sagas from the Viking age.

People who came and tried changing their faith, culture, or society mostly left with an ax 5 inches inside their skull. Jim Lyngvild is the owner of this temple and the beautiful Viking style house Ravnsborg next to it. He has sometimes a Viking market you can visit, which you can see in two of my other videos here on my channel, and this is also a good opportunity to look inside the temple and his house Ravnsborg.