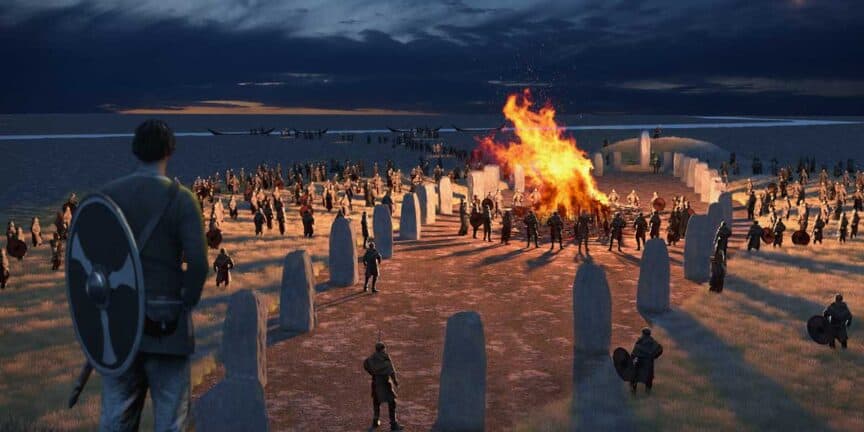 Mundilfari is a man from Midgard “Middle Earth”. He has a daughter Sol “Sun” and a son Mani “Moon”. The Gods were outraged that Mundilfari who is a human had the nerve to call his children after the sun and the moon. The Gods took the children and threw them into the sky, where they are banished to drive a chariot pulled by horses until Ragnarök.

Ottar built an altar to the Goddess Freya and offered sacrifices to her. Freya helped Ottar win a bet by transforming him into a boar, “Hildisvini”. Ottar and Freya went to Jotunheim to visit the giantess Hyndla, she is a seeress. She revealed to Ottar that he is the son of Instein and the priestess Hledis and that Sigurd, one of the greatest heroes, is among his ancestors. He also became Freya’s human lover, and she took him to Asgard, still disguised as the boar, Hildisvini.

Röskva is the daughter of the farmer Egil from Midgard. Röskva and her brother Thialfi are Thor’s eternal servants because Thialfi broke a bone and sucked the marrow out from one of Thor’s goats.

Sigurd is a hero, who killed Fafnir the dragon.

Sol is the daughter of Mundilfari, and she has a brother named Mani. Sol drove a chariot with the sun across the sky; her brother Mani drove the Moon.

Svipdag is the son of the seeress Groa.

Thialfi “Tjalfe” is the son of the farmer Egil and the brother of Röskva. Thialfi became Thor’s servant together with his sister because he broke a bone and sucked the marrow out, from one of Thor’s goats. Thialfi killed a giant made of clay, “Mokkurkalfi” that was made to scare Thor. Thialfi was in a running contest in Utgard, he ran against a young giant Hugi “Thought” the giant was an illusion and the embodiment of thought and no one can run faster than thought, So Thialfi lost.

Vidfinn is the father of Bil and Hjúki, who were kidnapped by Mani to ride with the moon to Ragnarök.