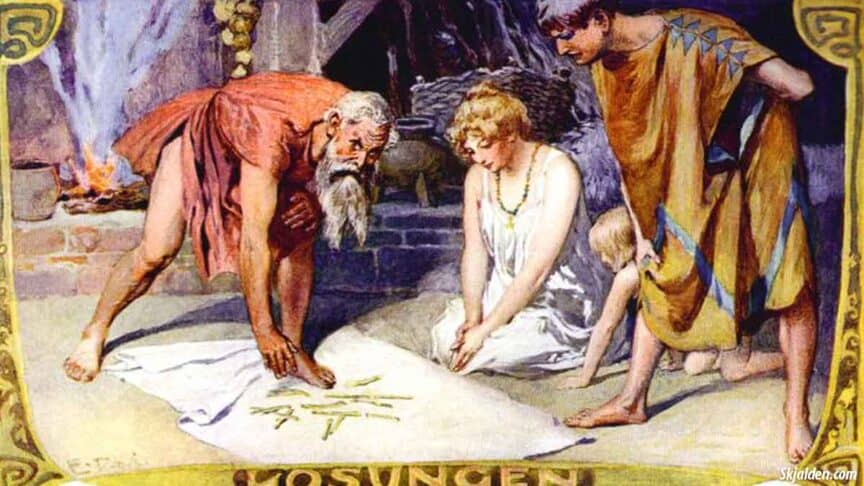 Delling (or Dellingr) means “the day-spring or the shining one” Delling is the God of sunrise. Delling is been married to the jotun woman Night “Nat”, together they have a son named Day.

Hoder (also Höðr) is the son of Odin and Frigg. Hoder is blind, and he lives in Asgard. Hoder killed his brother, Baldur with an arrow made from a mistletoe.

Honir has very long legs, Honir is tall and beautiful. He has a brother named Odin. He went to the Vanir as a hostage to seal the truce after the Asir, Vanir War. Honir is very indecisive and relies on Mimir for all his decisions, grunting noncommittal answers when Mimir was absent.

Magni is very strong. His name Magni means Mighty “Mægtig” He is the son of Thor and the Jotun woman Jarnsaxa. Magni has a brother named Modi. Magni and his brother Modi will inherit Thor’s hammer Mjölnir after Ragnarök. Magni has a horse named Goldfaxi, which is almost as fast as Sleipnir, Odin’s horse.

His name means Courage “Modig” He is the son of Thor and Sif. Magni and his brother Modi will inherit Thor’s hammer Mjölnir after Ragnarök.

Narfi is the son of Loki and Sigyn, he also has a brother named Váli. Narfi was killed by Vali, who was turned into a wolf.

He is the husband of Freya, and the father of Hnossa. Od somehow disappeared, and Freya wept golden rears for her lost husband.

Váli is the son of Loki and Sigyn, he has a brother named Narfi.

Vali is the youngest son of Odin, and his mother was Rind. Vali is an incarnation of the light of days that grows longer as spring draws near. That was because of beams of sunshine, which were often described as arrows. Vali is generally worshiped as an archer. Vali took avenge on Honir and killed him with an arrow because Honir killed his brother Baldr. Vali is one of the few Gods, who will survive at Ragnarök “The end of the world”.

Ve is the son of the giantess Bestla and Borr and is the brother of Odin and Vili. Odin, Vili, and Ve created the world from Ymir’s body. Ve and his brothers also created the first humans; Ask and Embla.

Vili is the son of Borr and the giantess Bestla, Vili has two brothers Odin and Ve. Odin, Vili, and Ve created the world from Ymir’s body. Vili and his brothers also created the first humans; their names are Ask and Embla.