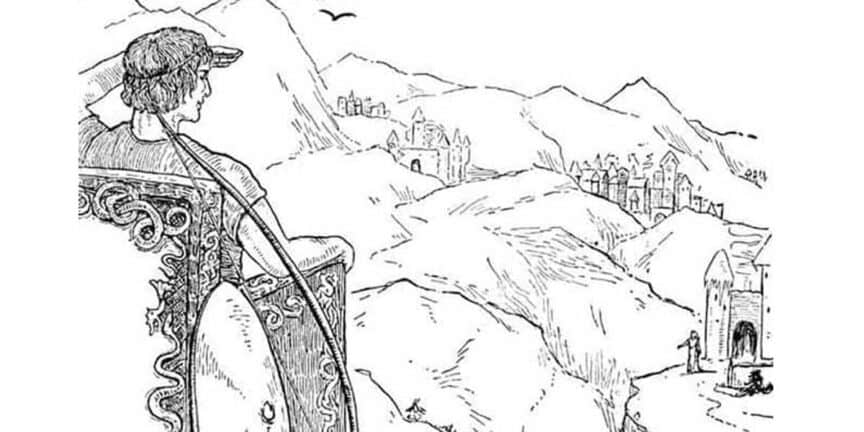 The two giants Gymir and his wife Aurboda had a daughter named Gerd, she was the most beautiful of all the women.

One day the God Freyr had sneaked into Odin’s house where he could look out over all the nine realms, here he sat in the seat called Hlidskjalf. When Freyr sat there, he looked out of the window and to the north, where he saw a magnificent house on a hill with a woman next to it. She was just about to enter the house, when she lifted up her arms, to unlock the door, the light reflected off her arms, and the whole world lit up.

When Freyr walked away from Odin’s house, he was filled with sorrow, and when he got home he stopped eating, drinking, and sleeping, and he even stopped speaking to others.

His father Njord was worried about his son Freyr, so he sent word for Freyr’s servant Skirnir, and asked him to go have a word with him. Skirnir asked Freyr why he was so angry that he would not speak to anyone.

Freyr replied, that he had seen a woman so beautiful, that if he could not have her, he would not want to live. And now that you are here my servant, I want you to go and ask for her hand on my behalf. Bring her back here to my home in Asgard, no matter if her father agrees or not. I will pay you generously if you manage to do this.

Skirnir replied; Do not worry, Freyr, I will do this for you. But I do not want your riches, I want your sword.

Freyr’s sword was a very powerful sword, and the sword could fight by itself.

Freyr did not think twice about it and handed Skirnir his magical sword.

Skirnir now traveled to the house of Gerd in Jotunheim with the marriage proposal from Freyr, Skirnir had also brought some apples of youth with him, which she could have if she accepted the marriage proposal, but when Gerd heard about the proposal she got furious, and she immediately rejected the offer.

Skirnir then offered to give her, the ring named Draupnir, which is a very special and magical golden ring, every ninth day eight new rings would drop out of Draupnir. The eight new rings are of equal quality as Draupnir.

Gerd was not impressed and also rejected that offer, Skirnir then switched tactics and tried to threaten her, at first she did not care about the threats, because she had no intention of marrying Freyr.

Skirnir then started to threaten to put curses on her, by using the secrets of the runes. That freighted Gerd into agreeing to marry Freyr, but she did have one demand that Freyr had to wait nine days before they would be married. The nine days were Gerd’s way to torture the feelings of Freyr.

When Freyr heard that he had to wait nine days, he said;

Long is one night, long is another, how will I suffer even three, often for me a month, much less seemed, than half this holding time.

Because Freyr had given his sword to his servant, he was left without a weapon when he faced the giants in the years to come.