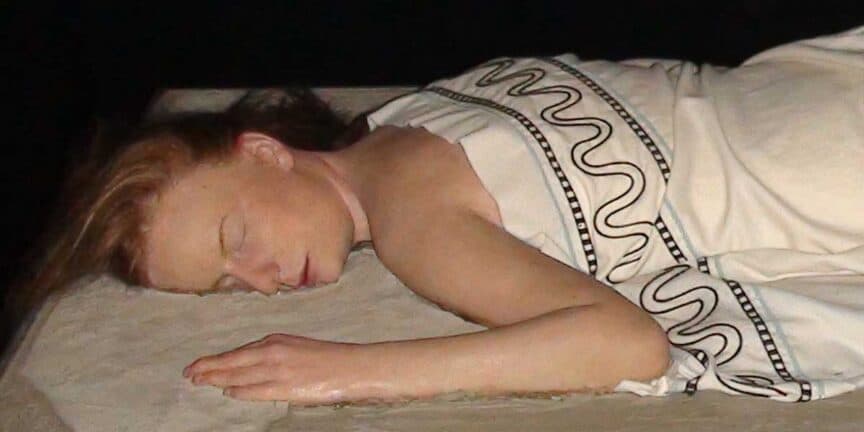 In 958, Harald Bluetooth came to power, after his father Gorm the old (In Danish: Gorm den Gamle) died. Back then the Danes were split into many clans, and the land area that Harald inherited from his father, was just Jutland (In Danish: Jylland), and the small islands around Jutland, and possibly also Fyn.

However, Harald who had been standing in the shadow of his brother most of his life turned out to be an ambitious King, and Harald Bluetooth would in the coming years unify the Danes into one Kingdom, called Denmark.

But a King of course also needs a strong Queen at his site, and after Harald’s first marriage ended with Gunhild, he met the beautiful Princess Tove who was of Slavic descent, and they got married around the year 970.

Princess Tove was from the western Slavic tribe called Obotrites, who was located in what today is Mecklenburg Vorpommern (In English: Mecklenburg Western Pomerania) in northern Germany.

It was most likely an arranged marriage, which was common in the Viking Age, and Princess Tove was probably part of the agreement in forming an alliance between King Harald and Mistivoj who was the King of the Obotrites.

Tove (Tófa) was very young when she married Harald, and she might just have been a teen, which would explain why her mother would also move to Denmark with her. We are not sure where she lived in Denmark, but it is speculated that it was in Jelling or in Sønder Vissing, were a runestone in memory of her mother was raised.

However, there is very little information about Tove, and it is therefore also unknown if Tove was the mother of any of Harald’s children, since there are next to no documentation available about it.

The most important reason for this marriage seems to have been the heathen alliance that was formed between the Danes and the western Slavic people. And there is no doubt that this heathen alliance was a direct response to the ever-increasing threat from the Christians, who were spreading their religious message with the sword throughout the pagan lands of Europe.

Harald improved the Viking wall on the Danish border known as Dannevirke. This wall stretched across the southern part of Jutland and to the wetlands in the west. And according to the myths, it was his mother, Queen Thyra, who had also seen the threat on the horizon and ordered the expansion of Dannevirke during her lifetime.

Harald also ordered the construction of a bridge known as the Raven bridge (In Danish: Ravningebroen), that was built in order to help his army, move faster south in case of an attack.

Harald also ordered mega constructions across Denmark and he would draw his inspiration from the Slavic fortresses and built his own fortresses strategically across Denmark. These Viking fortresses are known as ring fortresses, and they function as both a defense from an invading army, but also as a base for his warriors.

However, Harald would eventually bend the knee for the German-Roman emperor Otto I, and convert to Christianity. Which is something that can be read on the Jelling stone, at the Church in Jelling.

The inscription on the Jelling stone

In English: King Harald ordered these kumbls (Memories/Monument) made in memory of Gorm, his father, and in memory of Thyra, his mother; that Harald who won for himself all of Denmark and Norway and made the Danes Christian.

Harald’s decision to bend to the will of the emperor, threw Denmark into a civil war, between Harald and his own son, Svend Forkbeard (In Danish: Svend Tveskæg). That ended with Harald paying for his treason to his own roots in blood, and Svend Forkbeard, claiming the throne to himself.

The fate of Tove after Harald’s death is unknown, she might have placed under house arrest, but it is also possible that she was allowed to leave Denmark and travel back home. Regardless of what happened to her, Tove will always be remembered as the first Viking Queen of a unified Denmark.