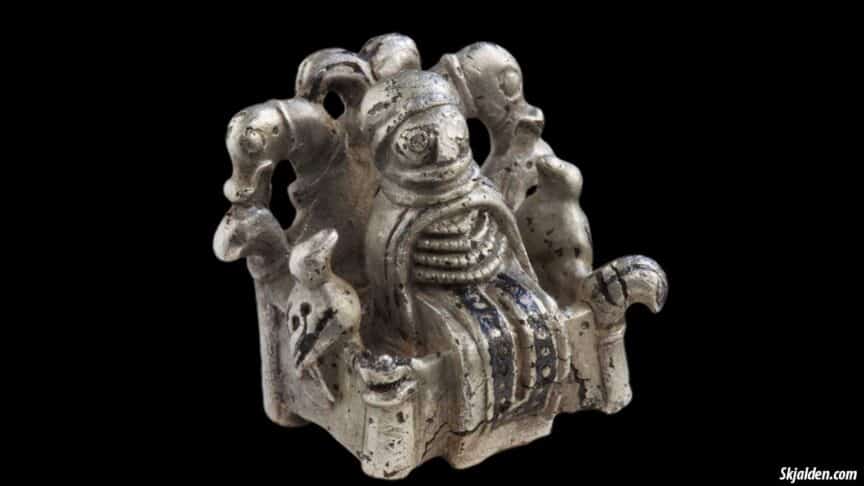 On the 2nd of September 2009, the local amateur archaeologist Tommy Olesen, found a small figurine, depicting the god Odin. It was found during the excavations conducted by the Roskilde Museum of the small village of Old Lejre (Danish: Gammel Lejre).

Lejre is quite famous in the old Viking sagas, it was where the clan called shield kids (Danish: Skjoldungerne) originated from. You may not have heard about this name before, but if I mention that Ragnar Lothbrok was one of them, then you probably have an idea of who they were.

The figure has been named Odin from Lejre, and it is estimated to date to around 900-950 CE, which would put it approximately in the middle of the Viking Age.

Odin is depicted as sitting on his throne (Old Norse: Hliðskjálf), wearing a floor-length classy suit, an apron, a cloak, a rimless hat, a neck ring, and four bead necklaces. The throne is decorated with four snakeheads, two in the front, and two in the back, and on the armrests sit Odin’s two ravens Huginn and Muninn.

Some scholars have questioned if it even is Odin, because it clearly is a dress that he is wearing, and Nordic people did not have a tradition of walking around in a dress as males do in Islamic countries.

Therefore, it has been speculated by the Swedish archaeologist and Iron Age researcher Martin Rudkvist that the figure could be depicting his wife Frigg or the fertility goddess Freya.

According to him, was the art of males and females during the younger Germanic time and Viking Age, based on the traditional gender roles. The artworks would often have the same outfit as the people, however, it was mostly the upper class that was depicted in the art.

He argues that there are three clear signs that it is a woman, the dress, the apron, and the four-pearl necklaces around its chest. This would never occur on traditional depictions of men, and he emphasizes that the figure has no masculine features of the time. It is, according to him, a depiction of a woman.

Sarah Croix who was at the time a Ph.D. student in archeology and gender history at Aarhus University agrees with Martin Rundkvist. According to her research, the dress and the jewelry are feminine. She adds, the Aska figure has been interpreted as the goddess Freya, and that figure had similar clothes. However, Odin is known as shifting between being male and female, which probably happened during special rituals.

Else Roesdahl, who is a Professor of Medieval Archeology at Aarhus University stated, we know that Freya was an important goddess within the pagan religion during the Viking Age, and, therefore, I lean towards the belief that it is her.

Today, the Odin from Lejre figure is located at the Roskilde Museum, so if you are planning on visiting the Viking Ship Museum in Roskilde at the harbor, you may want to swing by the other Museum in the city center as well.