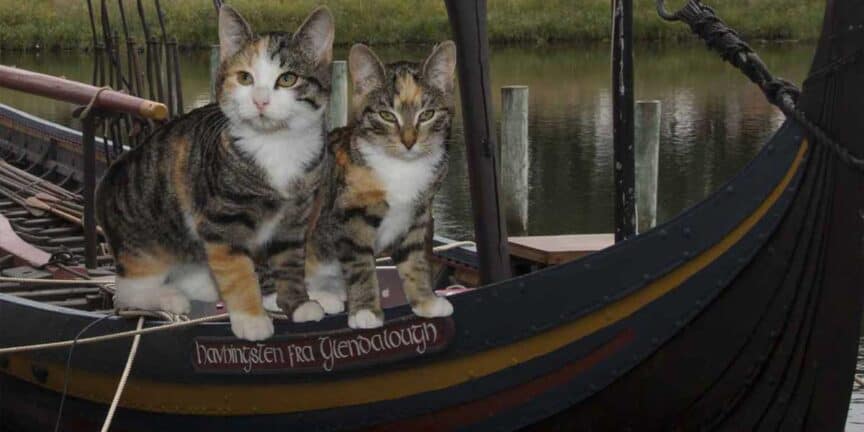 In Norse mythology the cat has always had its place, for instance, the Goddess Freya had two cats who pulled her chariot, or in the saga of Thor’s Journey to Utgard, where Thor lifted the Midgard serpent, the serpent had been turned into the shape of a cat with the use of magic (Old Norse: seiðr).

We know from excavations that the cat was not just mentioned in the sagas, but also part of the daily life. The cats came to Europe from Egypt about 3000 years ago, most likely from Greek and Phoenician traders. The ancient Greeks and Romans highly valued their cats, because they took care of the undesirable rodents.

It seems that the Vikings valued their cats for the same reasons, at least according to the scientists. Because many of them were farmers and the grain that they had stored inside their houses attracted rodents, which then attracted cats.

The cats got their food and the people got rid of the annoying rodents. It is believed that the cats started to move into the home, and became pets for the same reasons. Having a cat inside the home must have helped to keep most of the rodents away, which made it ideal to have a cat in the house. The people and the cats probably developed a friendship between them as we have today.

The Vikings also brought some of the cats with them on their boats. This was not because the cats were great traders nor were they fighting with them in battle. The cats did also not have their own small tents in the camps, where they could sleep at night. The reason why the cats traveled aboard the Viking ships was probably to keep the mice and rats in check.

One of the earliest cat findings in Denmark is at Nonnebakken in Odense. This place used to have one of the well-known circle fortresses from the Viking age, just like the one in Trelleborg. The ruins are long gone and today this place is in the center of the city next to a popular park. Many of the people who live here and pass-through this area, on a daily basis probably have no clue about what this place once was.

One of the people who lived near this Viking fortress had so many cats, that the archaeologists think that there used to be a cat farm. There have been found remains from 68 cats in an old well, and it seems that none of them died of natural causes. Although many of the people were cat lovers it was not always the case, either here or else were. The cats had their uses and not just as a tool for getting rid of rodents. It is believed that these 68 cats were all slaughtered and then skinned.

We know that cats were known all over Denmark since there has been found cat remains across the country. Most, if not all of the cats share the same DNA as the ancient Egyptian cats.

A fun fact, kittens were sometimes given to new brides as an essential part of setting up a new household. And since the cats are associated with the Goddess Freya who is the Goddess of Love, it was very appropriate to receive a cat as a wedding gift.