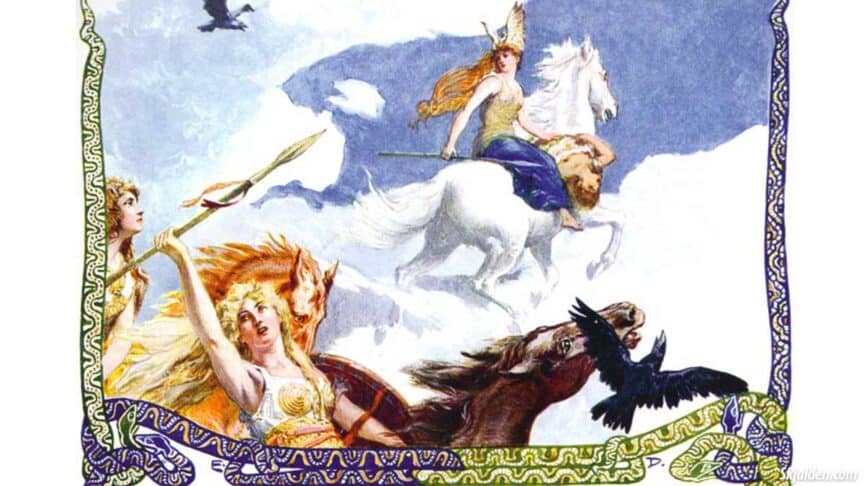 In Norse mythology, a Valkyrie (Old Norse: Valkyrja, plural Valkyrjur.) are female humans (possible former nobles), or female Jötnar who has been chosen by Odin to serve. Their role is to decide which of the fallen warriors that have died bravely in battle will go to the afterlife in Valhalla. Valkyrja is two words put together, Val, “dead body on a battlefield”, kyrja “chooser”, in plain English they are often just referred to as, chooser of the slain.

The Valkyries are the servants of the god Odin in his great hall called Valhalla. It is the duty of the Valkyries to serve the warriors in their afterlife with drinks and food. They fill the horns with mead from the enormous cauldron inside the hall of Valhalla that is constantly being filled with endless mead from the she-goat Heidrun.

There are no records of male Valkyries, all of the Valkyries are female. None of them are allowed to be intimate with a person. They are not objects of beauty just to be admired, their role in the hall is just one of their responsibilities.

When there is a battle in the realm of Midgard, Odin will send the Valkyries to watch over the battle. He always sends them in numbers of three, six, nine, and so forth. The Valkyries will hover over the battlefield (like birds over their prey) mounted on their horses dressed in their battle gear with a spear in their hand.

They will judge among the fallen, and choose the bravest of the warriors to join them in the afterlife. The chosen will be brought to Asgard, where the goddess Freya has the right to choose half for her field called Fólkvangr. When she has picked her half, the rest will go to Valhalla.

Dr. Jackson Crawford who is an expert in Norse mythology has speculated that Fólkvangr may, in fact, just be another name for Valhalla. Highlighting Freya by mentioning that she gets to choose half, could have been an indication of her importance. It is possible that Freya is the one who is in charge of the Valkyries.

The Valkyries seem to be allowed to roam around the lands of Midgard when they are not needed. Odin even allows some of them to take the shape of a beautiful white swan, but if a Valkyrie is seen by a human without their swanlike disguise, she will become mortal and will never be able to return to Valhalla.

The total amount of Valkyries is uncertain, but we do have a list of 23 Valkyrie names and the meaning of the names. These names have been mentioned in the old Icelandic sources, Grímnismál, Völuspá, Helgakviða, Hundingsbana, Völsunga, Sigurðarkviða.