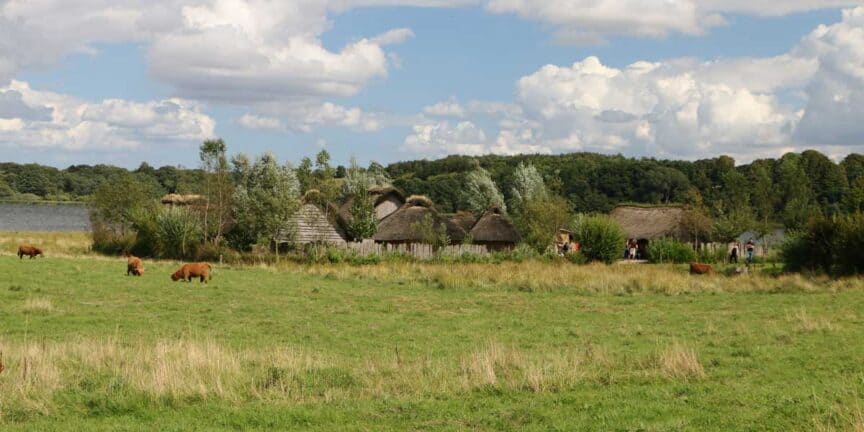 After 14 years of tireless work, the Viking town Hedeby, along with Dannevirke, which is the biggest defensive fortification in northern Europe, has now finally been accepted on Unesco’s world heritage list.

The construction of Dannevirke started during the late Iron age. And according to the myths, it was Queen Thyra and her son King Harald Bluetooth that ordered the expansion and made the biggest improvements of Dannevirke during the Viking age.

Dannevirke is not one long wall, but it consists of multiple ramifications, with a total length of 30 km (18.64 Miles), and shuts off Jutland from invaders at its neck.

The last time Dannevirke was used in a conflict, was in the second Schleswig war in 1864. When Denmark fought the Kingdom of Prussia and the Austrian Empire. The Danes lost the war, and the German confederation annexed Schleswig, Holstein, and Lauenburg.

During the Viking age, Hedeby was the biggest town in Denmark, and one of northern Europe’s most important trade towns. The archaeologists have found many exciting Viking finds from this area, which can be seen at the Danevirke museum in Germany. However, most of the exhibition at the museum is focused around the 1864 war.

With both the Viking town Hedeby (Haithabu) and Dannevirke (Danevirke) now on Unesco’s world heritage list, it will probably make more people aware of these ancient cultural treasures from our ancestors. And hopefully, with more people visiting these areas, it will generate more revenue for the attractions, to conduct more archaeological excavations locally, and to improve the presentation of Hedeby and Dannevirke to the public.

Today Dannevirke and Hedeby are part of South Schleswig (In German: Südschleswig), which is located in northern Germany. And now that both the Viking town Hedeby and Dannevirke has been added to Unesco’s world heritage list, it means that there now are 43 Unesco World Heritage Monuments in Germany.