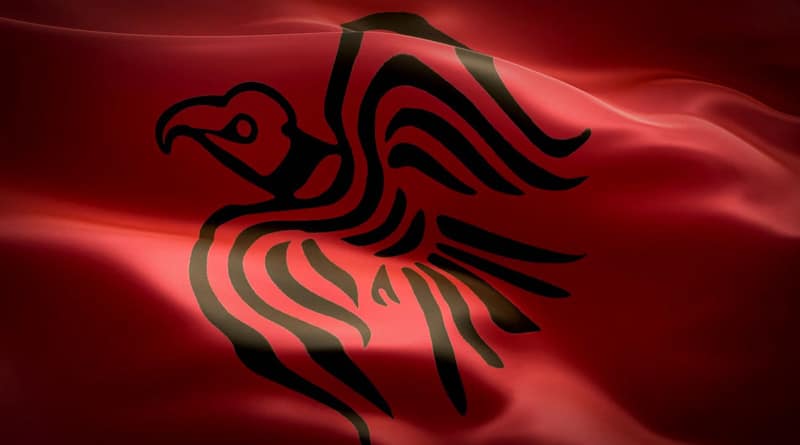 The Raven banner… the flag flown by the Vikings when they raided the shores of their victims across Europe, or so the story goes…

In reality, the raven banner was not a universal Viking flag, because the people in Scandinavia were not one nation. The society in Scandinavia was split into many small clans at the beginning of the Viking Age, and therefore every clan or Viking chieftain had their own flags and symbols to identify their clan.

The Viking flags did also not have the same rectangular shape as national flags have today, instead, it was triangular. And therefore the many rectangular-shaped flags with a raven printed on it, that you see popping up for sale across the web, is an inaccurate depiction of a Viking flag.

The Ravens played a major role in the Viking age, and by using ravens as a symbol on a banner, it is possible, that the Vikings believed that it gave the banners some kind of magical qualities, and therefore used it to strike fear into the heart of their enemies, by invoking the power of Odin.

Especially in warfare, since the Ravens are connected to the heathen God Odin (Old Norse: Óðinn) who is the God of war. Which could mean that this raven banner was seen as a war banner, and therefore only used in warfare.

The Christians probably thought that the banners were magical as well, but while the heathens saw it as something good, the Christians most likely believed that these banners carried evil pagan symbols.

The Ravens and therefore the raven symbols are most likely connected to Odin, who has on some occasions been called the Raven God. Odin is known under many different names, and this is probably because of his shapeshifting abilities and his lust to wander around Midgard in a disguise. Odin is indeed a very curious God, who is always in the pursuit of new knowledge, and he uses his two ravens Hugin and Munin to gather the latest news across the nine words every morning.

This is also something that the Icelandic historian Snorri Sturluson explains in the first part of the Prose Edda (also known as the Younger Edda, Snorri’s Edda (Icelandic: Snorra Edda)).

Translated into English: ”Two ravens sit on Odin’s shoulders and bring to his ears all that they hear and see. Their names are Huginn and Muninn. At dawn, he sends them out to fly over the whole world, and they come back at breakfast time. Thus he gets information about many things, and hence he is called Rafnagud (raven-god). As is here said:

”Huginn and Muninn
Fly every day
Over the great earth.
I fear for Hugin
That he may not return,
Yet more am I anxious for Munin.”

What does the raven symbolize?

Besides the obvious of the ravens’ connection to Odin, what else could the raven symbolize? In the legendary saga called the saga of Norna-Gest (In Icelandic: Nornagests þáttr) it describes what could be an explanation to the raven on the banner. And according to the source, war or bloodshed was carried out to make the raven happy, or in other words, to feed the raven.

”Now the blood eagle
With a broad sword
The killer of Sigmund
Carved on the back.
Fewer were more valiant
As the troops dispersed
A chief of people
Who made the raven glad.”

And according to Geffrei Gaimar’s history of the English (Estorie des Engles written ca. 1140 CE), the raven banner was Ubbe’s banner (gumfanun). Ubbe was the son of the famous Viking Ragnar Lodbrok Sigurdsson and he was the brother of Iware (Ívarr) and Halfdan (Hálfdan).

Ubbe’s army bore the raven banner at the battle at Cynwit (Cynuit) in 878 CE where he, unfortunately, was defeated and then buried by the Danes in a very big mound in Devonshire, called Ubbelawe.

The Annals of St. Neots

Translated into English: ”It is said that three sisters of Hingwar and Habba [Ivar and Ubbe], i.e., the daughters of Ragnar Loðbrok, had woven that banner and gotten it ready during one single midday’s time. Further, it is said that if they were going to win a battle in which they followed that signum, there was to be seen, in the center of the signum, a raven, gaily flapping its wings. But if they were going to be defeated, the raven dropped motionlessly. And this always proved true.”

Translated into modern English: ”A.D. 878. This year about mid-winter, after twelfth-night, the Danish army stole out to Chippenham, and rode over the land of the West-Saxons; where they settled and drove many of the people over sea; and of the rest the greatest part they rode down, and subdued to their will; — all but Alfred the king. He, with a little band, uneasily sought the woods and fastnesses of the moors. And in the winter of this same year, the brother of Ívarr and Hálfdan landed in Wessex, in Devonshire, with 23 ships, and there was he slain, and 800 men with him, and 40 of his army. There also was taken the war-flag (guðfani), which they called “Raven”.”

This very rare silver coin is another example of a depiction of the Viking raven flag. It was minted in York (Jórvík), by the Norse King of Northumbria in the 10th century. The symbol on the flag depicts a raven, however, it is a very simple design, so it difficult to be certain. It is possible that the Vikings had been influenced so much by the Christians that they used the cross on this coin. If you ask me, I would like to believe it is raven, with its wings stretched.

This silver coin was also minted in York, England in the 10th century, and here we can clearly see a depiction of a raven with outstretched wings. On the opposite side, there is a small cross in the center. So there can really be no doubt of the importance of ravens to the Vikings.

Raven banner at the battle of Ashington

According to The Gesta Cnutonis Regis which was written sometime around 1043 CE. King Cnut the great of England, Norway, and Denmark also used the raven embedded on his war banner. Which was recorded in 1016 CE at the battle of Ashington in Northumbria.

”At Ashington, you worked well
in the shield-war, warrior-king;
brown was the flesh of bodies
served to the blood-bird:
in the slaughter, you won,
sire, with your sword
enough of a name there,
north of the Danes’ Woods.” – Knýtlinga saga

Translated into English: ”For the Danes had a banner possessed of a wonderful property, which although I believe it will seem incredible to the reader, nevertheless, because it is true, I will insert it for him for the sake of truth. For although it was woven of a very plain bright silk and had no figure embroidered on it yet always in time of war a raven seemed as it were to appear on it, in victory opening its beak and beating its wings, restless in its feet, but very quiet drooping in its whole body in defeat.” (Hrafnhildur Bodvarsdottir, p.111)

Raven flag on the Bayeux Tapestry

The raven banner can also be found on the Bayeux tapestry which was woven after the battle of Hastings in 1066. This tapestry depicts the invasion of the Normans led by William the Conqueror, and on this tapestry, we can see two examples of the banner with one more clearly depicted than the other.

The first example of the raven banner can be seen when the Normans ride into battle. Here a knight carries a lance or a spear, with what seems to depict a raven embedded on a triangular-shaped flag, with loosely hanging threads as decoration.

The second example which is a bit more unclear is shown where the brothers of Harold Godwinson are slain. As you can see this flag does not have the raven embedded on it, but it does have a triangular shape.

I’ve always wondered how a new Nordic flag based on the ancient raven banner design would look like. However, most of the flags that I have seen from across the web, have mostly been designed on rectangular shape.

I would like to encourage designers to use the triangular shape and make a new and modern version of the raven banner, and if possible with the use of runes as well. This is the Odal/ Othalan rune, not really a Viking rune since it derives from the elder futhark, but it is my favorite rune. It stands for heritage and tradition, and I would argue that it could stand for the homeland as well. However, keep in mind, that the raven banner, was most likely only used as a war banner.