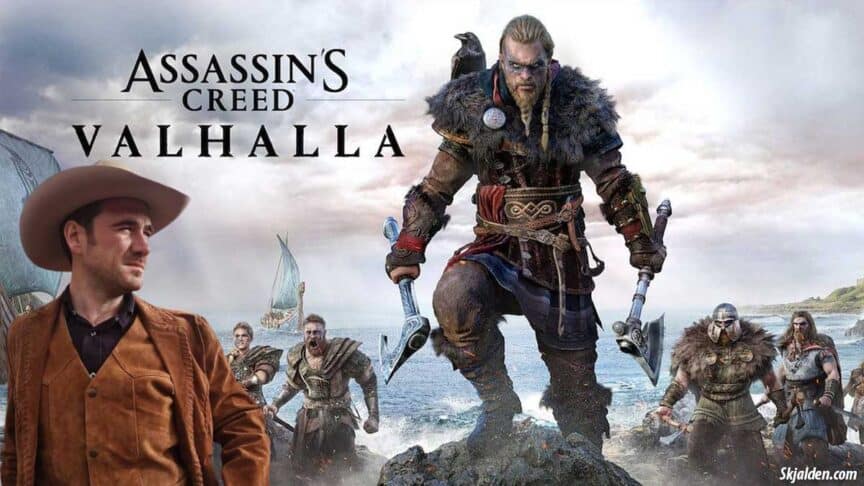 The respected Old Norse expert, Dr. Jackson Crawford, who is known by many for his excellent youtube videos and published books on Norse mythology, has been working as a consultant on the new game Assassin’s Creed Valhalla.

Assassin’s Creed is an action-adventure video game that began in 2007, and Valhalla will be the twelfth main game in the series.

It has become an increasing trend to include the use of historical and language experts in the gaming industry, however, this is nothing new to the Assassin’s Creed series.

The game is a time capsule

After the disastrous fire that caused irreversible damage to the Notre-Dame Cathedral in Paris (15 April 2019), people across the world were in shock at the historical artifacts that were lost.

Five years prior, Assassin’s Creed’s eighth game “Unity” in the series, had digitized the entire church as an artistic vision based on the late 1700s, which was during the french revolution. This time capsule, together with the raised funds collected to restore the church will certainly help bring it back to its former glory.

Gaming companies are pumping billions of dollars into making their games stand out in this competitive market. An industry that is expected to generate $159.3 billion in 2020, and hit the $200 billion mark in 2023 according to newzoo.

Ashraf Ismail who was the director of Assassin’s Creed Valhalla until June 2020, has stated that they have gained a broader understanding of the culture after they had conducted extensive research of the society that lived in the ninth century.

Quote: I feel like in other forms of media, Vikings have this image of being brutal warriors and they were, but there was another side to it they were also farmers and settlers and explorers. They were people with families, and we’ve been inspired to show that full picture. -Ashraf Ismail

This is most likely why Ubisoft teamed up with Dr. Jackson Crawford who’s a professor in Old Norse, to help them make the game as accurate as possible. The exact details of his role are at this point up for interpretation, but he will probably bring his expertise of the Scandinavian culture and the Old Norse language into the universe of blood and gore, where the language of the sword is more common than not.

Dr. Jackson Crawford is driven by sharing accurate information without inserting his own agenda, something that this website you are on is also striving to achieve as well.

Ubisoft’s goal with the game is to deliver a personal story through the eyes of the character Eivor, who can be played as either male or female. It will be Eivor’s path, decisions, and relationships that the players will emerge themselves into.

According to Ashraf Ismail, Eivor is a pagan, and he believes in the sagas and the stories of the Norse gods. The game treats the Norse belief as a cultural thing, the symbols, people, and the signs that players will see throughout the world will reflect that.

The game will strongly revolve around creating and developing a settlement in England, building relationships, and raiding nearby villages for resources.

The game trailer has elements that clearly have been inspired from the series Vikings, for instance, the Hollywood “Viking” hairstyles, or Odin at the battlefield. While it is true that Odin is a god of war, and is often present in one form or another at the battle, it irritates me that Freya is never depicted as being at a battle as well. The goddess Freya is also associated with death, and she always gets to pick the first half of all who have been slain in battle, the rest will go with Odin to Valhalla.

The trailer also seems to depict a stave church (Time mark: 0.0.5 sec) in the settlement in Norway, this does not fit the narrative of a pagan society.

What could be a Volva “female seeress” (Time mark: 0.20 sec) does not fit the description from the sagas.

These small details, will probably not annoy most of the fans of Assassin’s Creed, where the historical and religious details may just be a secondary element, compared to the importance of having the exact weapons and combat techniques from the Viking Age available in-game.

An element in a game that is very important, at least, to me, is the background music. Music can lift up any genre, we saw that with Wardruna in the series Vikings, a band that goes to great lengths to use historically correct instruments from the Viking Age.

The ambitions for the game seem to be very high, especially with Dr. Jackson Crawford helping the developers stir the oars on its historical correct path. We won’t know for sure, how much of the game will be accurate vs fantasy, or if the game will fulfill the expectations of those who are into Vikings, I guess we have to wait for its release, which is expected to happen in the fourth quarter of 2020. Order a copy now