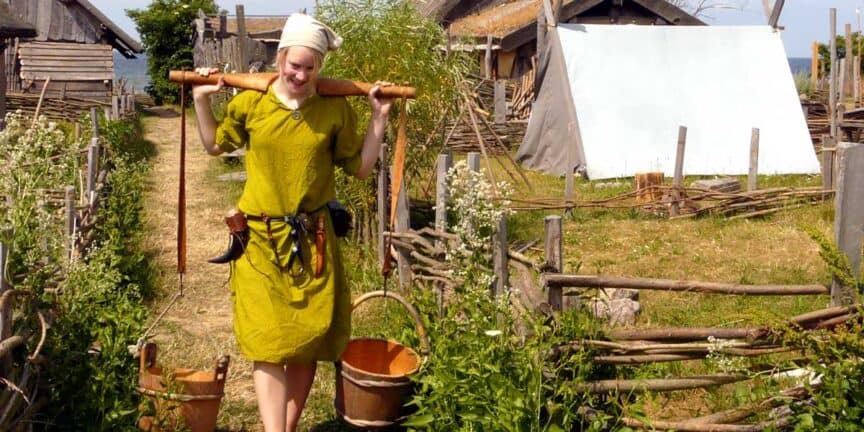 Since the TV show, the Vikings aired for the first time in 2013; there has been a lot of talk about the roles of the women in the Viking age in Scandinavia.

Did the women go on Viking raids and fight together with the men? Where all the women shield maidens? Did the women have equal rights in the Viking age?

Most women were housewives in the Viking age and only a small percentage of the women went on Viking raids with the men. The women’s life was centered around the home and the farm. When the man went on a raid, she had the responsibility of the household and the harvest and therefore also the survival of the family.

The women’s typical duties were housekeeping and cooking, but also sewing and weaving. It was also the women that took care of the children and the elderly. Everyone in the family no matters their gender or age helped with the daily tasks.

Despite the fact that women had a good position, they were still inferior to men. They were not allowed to act in court (called Tinget), and it was also the men that had the political power. The women did also not have any legal right to any inheritance from the man; this means that it was most likely only the males in the family that would receive an inheritance after their father’s death.

Women’s work in the Viking age

Archaeological findings show that women mostly worked with textile production. Some of the women were so talented at making complicated patterns and beautiful designs that some of the women might have specialized as textile workers. These textiles would then be sold at the markets, which shows some women having an entrepreneurial spirit.

Some women in the Viking age would gain a particularly high status in their lifetime. For instance, one of the richest burials that have been found in Scandinavia from the Viking age was found at Oseberg in Norway.

Here a woman was buried in a beautifully decorated ship with many valuables. Some of these valuables were jewelry, objects carved in wood and many household items. These items show us that while women could achieve power like men, they would still have some specific responsibilities around their home.

Marriage in the Viking age

In the Viking age, women lived at home with her family until she got married. According to the sagas, the family probably had a wish to help pick the right man for the women. If her father was asked by another man for his daughter’s hand in marriage it was not necessary for him to ask his daughter for her opinion, and if she refused to follow the wishes of her family, the sagas describe, how badly this could turn out.

Just like modern women today, girls in the Viking age tried to find their dream guy, and would often compete with the other women in who had the best man. It is said in the sagas that the woman ”got married” whereas the man ”married.” When the couple was married, the husband and the wife ”owned” each other.

Divorce in the Viking age

Even in the Viking age a marriage would not always last, and the women had the right to a divorce if she wished. In the old Icelandic sagas there are many divorce laws, a woman could for instance demand a divorce if her better half had settled in another land, while he was out on his travels, but only if they didn’t have sex for three years.

This was because they wanted to ensure that women would not get a lonely life. But mostly the reason for divorce was violence or if the man’s family became poor.

If the wife were unfaithful to her husband, she would be punished hard, whereas the man could have multiple mistresses, and even bring them to his home. If one of his mistresses were to move into their home, the housewife would have the authority over her in the home.

Because of a lack of documentation we do not know the number of divorces in the Viking age. In case of a divorce, the babies and small children would stay with their mother, while older children were split amongst them, depending on the wealth and status of their families.