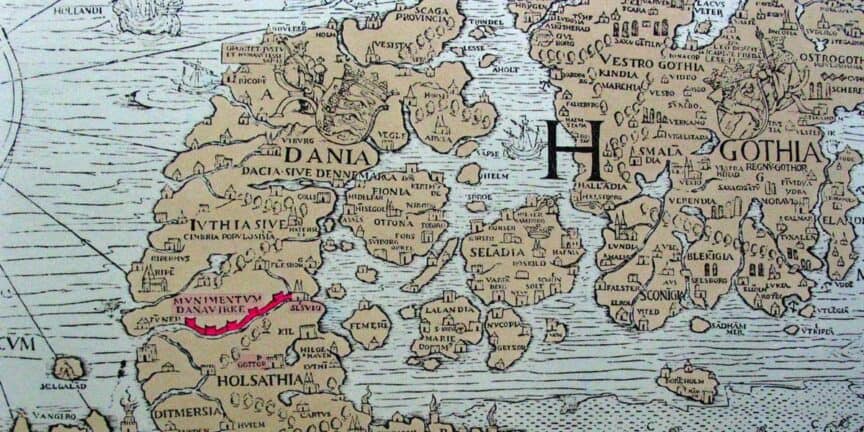 In the Danish folklore, there is a myth about why and how Dannevirke was built. Sometime in the middle of the 9 century, Otto the Great, who was the King of East Francia, wanted to get the Danes under his thumb so he could collect taxes from them.

So Otto the Great traveled to Jelling where King Gorm the old and his wife Queen Thyra lived. Upon arriving he saw the beautiful Thyra and immediately fell all in love with her. So King Otto told King Gorm that he wanted all the gold in his Kingdom, including his wife Thyra, and if he refused to follow his command, he will take it by force anyway.

King Gorm who was stupid and lazy sat on his throne and looked at him while he was picking his nose with an open mouth and blank stare. Wondering what to say, and he only manages to mumble a bit for himself because he was too stupid to think of an answer.

But then the smart and beautiful Queen Thyra stepped forward and bowed to King Otto and said, of course, we will do as you please. You can have all the gold in our Kingdom and of course, you shall have me as well, we are after all just a small Kingdom and you have such a big and mighty empire.

My King if you just give me one year, I will personally together with my close guards travel around the whole Kingdom and collect all our gold and silver for you. When you come back here next year on the same date, all the gold and silver will be packed and ready for you transport back with you, and of course, I will travel with you back to East Francia and become your Queen, King Otto scratched himself on the back on the head, and thought about it for a minute and said, yes that sounds like a good idea, and I don’t even have to do all the traveling around your Kingdom myself, okay Thyra, I will be back in exactly one year.

The next day, Queen Thyra began to travel around the Kingdom and collected all the silver and gold, but instead of collecting it for King Otto the Great, she used it built a wall called Dannevirke, which would function as a defensive position against the south. One year later when King Otto returned, but he is stopped in his tracks by this massive wall, with Queen Thyra and all her warriors standing on top of the wall, laughing and pointing and probably making chicken noises at King Otto and his men.

Dannevirke was a Defensive Wall

This is, of course, a wonderful story, but it is unfortunately just a story. Dannevirke was not built in only one year, it was built in sections over hundreds of years, from around the 6th century to some time in the 12 century. It does, however, seem that it was during the Viking age that Dannevirke saw its biggest improvements.

The Danes have for hundreds of years been under attack from other empires and clans from the south. Which is why they decided to build a wall, to function as a defensive position against southern aggression.

After the death of King Gorm the old (Gorm den Gamle), his son Harald ”Bluetooth” Gormsson (Harald ”Blåtand” Gormsen) took over the role as King. It was at a time where political tensions were brewing beyond the Danish borders, especially from the ever-expanding Holy Roman Empire, pushing east and north.

While Harald’s father was having trouble with Otto the Great, now it was Harald’s turn to face his son, Otto II (also called the red, or Rufus). In the 960s Harald Bluetooth gave the orders to his men to expand Dannevirke, he emptied his chests, collected taxes across Denmark, and gathered every able-bodied person he could from every farm and house, to conduct this massive construction of Dannevirke.

Trees were cut, stones were moved, and the earth was shoveled and by doing this a finger was drawn in the Danish soil, you can come here, but no further. Dannevirke (Danevirke) would become the biggest line of defense in the Viking age in Northern Europe. Only built with muscles, determination, and a will to survive and protect their families.

Dannevirke was expanded to around 5 meters (16.4 ft) tall, 20 meters (65.6 ft) wide and about 30 km in length (18.64 miles), but it was not just one long wall, it was multiple walls, with the longest of them being Dannevirke and the second-longest Kovirke. The walls stretched across the neck of Jutland (Jylland), and the only entrance was at ”Hærvejen” which means the army road, where there was a big gate.

Dannevirke was probably not just built as a defensive wall to protect Denmark, but might also have been built to protect its trade routes, for instance, the town Hedeby was very close to the wall, and therefore close to the southern border. Dannevirke was not built exactly on the Danish border which was the River Eider (Ejderen), but about 20 km (12.4 miles) north.

Some sources claim that Dannevirke stretched across the whole neck of Jutland, from ocean to ocean, but that is a false claim. In reality, Dannevirke was from the fjord at Slien in the east to the river Trenen in the west. Further south from Dannevirke was Kovirke with was an alternative defensive position. It was not necessary to build it from ocean to ocean because there were huge areas with impassable marshlands and dense forests, that protected Denmark from invasions.

The Danes would not just stand on the wall and point their spears south in the expectation that the Germans would pick a fight with them. After Harald Bluetooth became the King of Norway in 970, he had increased his power and was no longer willing to accept any orders from the Holy Roman Empire.

In the summer of 974, Harald pushed the hand of the emperor away and moved his forces into what today is northern Germany, with the support from Norwegian Vikings. They defeated the Holy Roman Empire’s forces that were stationed there and pushed the rest of them further south.
When the Norwegians sailed back to Norway in autumn, the Holy Roman Empire’s forces attacked Dannevirke and defeated the Danes, and push far into Denmark and Harald Bluetooth was exiled to Norway by Otto II, the Holy Roman Emperor. The Danes would eventually regain the land, but that is for another video since this one is about Dannevirke.

Dannevirke would be maintained and built upon until the 12 century, were Valdemar I of Denmark would be the last King to contribute to the development of Dannevirke. Dannevirke would not see its use again before the 18 century, when the Danes yet again were at war with the German war machine, in the Schleswig wars.

Dannevirke was not built by Thyra Danebod

But even though Thyra Danebod was not the founder of Dannevirke, she still was a strong Queen that gave courage to the people in difficult times. She was the wife of the first most known King in a long line of Kings in Denmark, which makes her the mother of the Danish Kings. Could there be some truth to the story, and did she contribute to the construction of Dannevirke before her death? That is unfortunately not something we can prove since there are no written sources from the time period that conforms, that this was the case.

Today people are working on getting Dannevirke recognized as a UNESCO World Heritage site. Although Dannevirke is today located in Germany, I still want more people to know about it, since it is important to know your roots and history. Dannevirke can still be seen with the naked eye in the landscape, although it is not as epic as it would have looked a thousand years ago.