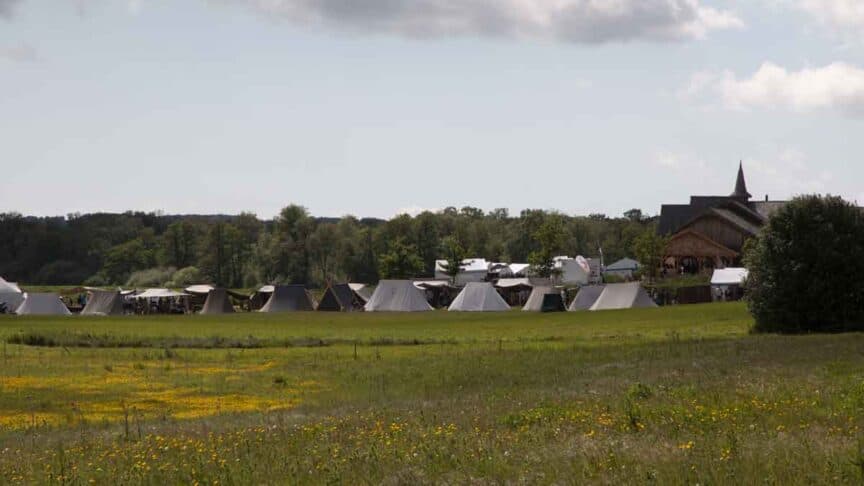 There are many myths and false facts about the Vikings going around in these years, so I made a top 15 list on which of the Viking myths, that I think are the most widespread ones. I would like to encourage you to check out many of the other posts about the Vikings on this website.

The Vikings were actually very talented in various areas such as shipbuilding, carpentry, jeweler, and blacksmithing. The Vikings built the best ships during the Viking age, which is the main reason that they were able to so travel far and wide, in a very short time.

Some absolutely amazing jewelry has been found all over Scandinavia and at former Viking settlements. Like this thumb-sized valkyrie figurine, which is made of gilded silver, it was found in Hårby, Denmark.

The Vikings were giants #14

They were all blonde #13

Genetic studies have proven that the majority of the Vikings in West Scandinavia and therefore Denmark, were red-haired. In the North-Eastern Scandinavia around Stockholm, it was mostly blonde hair that was dominant.

The majority of the fighters that went on Viking raids were men and a very tiny percentage were women, these female warriors were called shieldmaidens or ”Skjaldmær” in old Norse.

In reality, the majority of a women’s life revolved around the home and the farm in the Viking age. When the men went away for raiding or trade, the women did not just have the responsibility of the household but also the harvest and thus the survival of the family.

Written sources present Viking women as independent and having more rights and freedoms than any other woman anywhere else in the Viking age. The women had, for instance, the right to divorce if the man became violent towards her, but also the right to get married again.

Women in the Viking age had the freedom to become rich and powerful. The most valuable burial that ever has been found, was at Oseberg in Norway. It was a female and she was either a Nobel or a Queen.

They were called Vikings #10

While most people would stay in their villages for all their lives, some people were very adventurous during the Viking age and would go ”Viking”. The word Viking was a verb used to describe when someone went on a raid. Some of these raids could last months or even years, which made some people both rich and famous.

The Vikings were dirty and smelled badly #9

The Vikings were in fact very clean and took good care of their hygiene. The day Saturday in old Nordic was called Laugardagur which means washing day. Although the word has lost its original meaning in most Scandinavian languages, the word ”Laug” does still mean ”bath or ”pool” in Icelandic, and the word ”Dagur” means day. The Vikings actually had their own little hygiene set with could include items such as an ear spoon, comb, or even a razor.

The Vikings drank from skulls #8

This myth goes back to Runer seu Danica literatura antiquissima by Ole Worm that was published in 1636 and reprinted in 1651. Here you will find the phrase saying that the Danes drink from the curved branches of skulls that is from horns. This was translated into Latin as ex craniis eorum quos ceciderunt (from the skulls of those whom they had slain).

Vikings preferred weapon was an axe #7

It is true that the Vikings used axes in battle, but the most common weapons that have been found in Viking dig sites are spears. The Vikings also used knives, swords, round shields, bows, and arrows.

The Vikings are often shown with primitive weapons such as axes and spears. But they had actually very skilled weaponsmiths. They used a method called pattern welding, where the Vikings could make swords that were both extremely sharp and flexible.

The rarest and exceptional weapon made by the Vikings was the sword Ulfberht. The sword is of such high quality, that all attempts to make a replica in modern-day by using the method the Vikings did has failed.

The Vikings only lived in Scandinavia #5

The Vikings did come from the Scandinavian countries which today are called Denmark, Norway, and Sweden. But with a lack of fertile land and a growing population, the Vikings started to explore and create new settlements in many places throughout Europe, even as far away as Newfoundland in North America.

The Vikings were a nation #4

The Vikings were not one nation but many small different groups of people led by their own chieftain. Neither Norway, Denmark nor Sweden was even a kingdom before the end of the Viking age. Some of these small kingdoms did, however, work together when they went on big raids in foreign lands.

The Vikings were barbarians #3

Many books and movies depict the Vikings as some bloodthirsty barbarians that only seek to kill and destroy. While the Viking raids were indeed very violent, it is important to remember it was also a violent age.

But were the Viking armies really more violent than non-Viking armies? If we take a look at Charlemagne who was the King of the Franks in the Viking age. He ordered the beheading of 4,500 Saxons in Verden.

It does seem that the Vikings loved to destroy items of religious value, such as Christian monasteries and holy sites. They even killed the monks, which earned them quite a bit of hatred.

The Vikings probably enjoyed the reputation they had, people were so scared of the Vikings that they often fled from their cities instead of defending them when they saw a Viking ship coming near.

The Vikings only pillaged, raped and murdered #2

Even though the Vikings did raid plenty of cities throughout Europe including their own neighbors, it was actually only a very small percentage that was warriors. The majority of the Vikings were farmers, traders, craftsmen, and merchants.

For the Vikings that did set sail to raid and explore new lands for riches, it was not just in the search of silver and women. Many Vikings settled more or less peacefully in places such as England and France, but also in new and unexplored lands like Iceland and Greenland.

They also loved to explore new trade routes and trade with almost every country of the then known world, and in their search for new lands, the Vikings even crossed the Atlantic and reached America 500 years before Columbus.

Did the Vikings wear helmets with horns? #1

This is probably the biggest myth of them all, there are simply no records of Vikings having ever had helmets with horns and there is no evidence that such Viking helmets have ever existed. All depictions of Viking helmets in the Viking age, show helmets with no horns, and the only authentic Viking helmet that has ever been found do not have them either.

So, where did this myth about the Viking horned helmets come from?

An explanation could be that the Christians in Europe during the Viking age added this detail to make the Vikings look even more like a wild barbarians, by adding the horns of the devil on their head. It should be said that the God Odin wears a helmet with wings on it, which may look somewhat similar to horns.

Another explanation is that the Viking helmet with horns myth is from the 1900th Century when the Swede named Gustav Malmström who was an artist, published his illustrations in the book Frithiofs Saga (Friðþjófs saga hins frœkna), which is a 14th Century Icelandic saga.

In the 1870s when Wagner staged his ”Der Ring des Nibelungen” opera cycle, the costume designer Carl Emil Doepler created horned Viking helmets for the characters, which probably was the biggest reason why this myth was born.

There will probably still be some of you out there, that say well, I am sure that I’ve seen Viking helmets with horns somewhere. And you are somewhat right, there have been found helmets with horns, but they are from the bronze age.