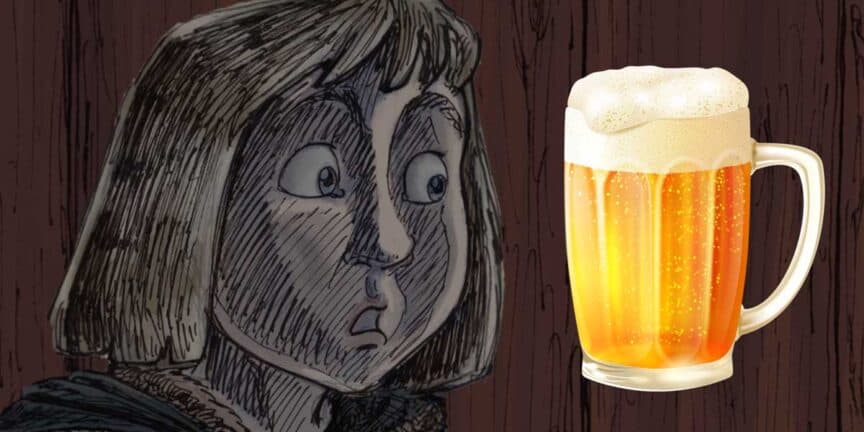 There is no doubt that the Vikings loved to drink, but they did not just drink mead as some people might have been lead to believe. Honey was not something that was easy to come by, which made mead a drink for more special occasions such as feasts and rituals. It was far more common to drink either beer or ale on a daily basis.

What did the Vikings drink?

It was not everyone who lived on a farm with a clean river nearby, some of the Vikings lived in towns such as Jelling or Hedeby. And because of the dirty water in these towns, beer was often drunk in large quantities every single day. The beer was made with both a high and low level of alcohol, so everyone in the family could drink it, and yes even the children in the Viking age would also drink beer to quench their thirst. The beer with a high percentage of alcohol was probably only drunk in the evenings or maybe just at the feasts and rituals.

The difference between beer and ale in the Viking age

However, there was a much bigger difference between beer and ale in the Viking age than there is today. Ale was not brewed on any grain in Scandinavia and maybe even most of northern Europe, which meant that ale was more like a cider, instead of being almost like a fruity beer brewed on grain.

The Vikings also drank wine, but it is difficult to know how far spread wine was in Scandinavia, and how many drank it, but the old Norse sagas do give us some clues.

The God Odin has been described as never eating anything nor drinking mead, beer, or ale, wine is all he needs and wants. This could have been a way to show us in the sagas, that wine was both known and seen as a luxurious drink, and a drink which only the rich or very powerful could afford to drink in Scandinavia.

How was drunkenness seen in the Viking age?

Just like many other things, alcohol has to be enjoyed in moderation, and the all-father Odin has warned us against drunkenness and alcohol abuse, in the Hávamál.

A better burden no man can bear
on the way than his mother wit:
and no worse provision can he carry
with him than too deep a draught of ale.

Less good than they say for the sons of men
is the drinking oft of ale:
for the more they drink, the less they can think
and keep a watch over their wits.

A bird of Unmindfulness flutters o’er ale feasts,
wiling away men’s wits:
with the feathers of that fowl I was fettered once
in the garths of Gunnlos below.

Drunk was I then, I was over drunk
in that crafty Jötun’s court.
But best is an ale feast when man is able
to call back his wits at once.

Did the Vikings drink from skulls?

Last time I talked about which drinking vessels the Vikings used to enjoy their drinks. So I wanted to mention a bit about it today as well. I am not going to talk about which vessels they used, you can watch my last video for that, but I will dispel one of the myths, and it is the myth that the Vikings drank from the skulls of their enemies.

Small translation mistakes can quickly change the way we understand the culture of a group of people. And one of these mistakes has to lead to many people believing in the myth that the Vikings drank from skulls of their enemies. This misconception has its roots in the book called, Ancient Danish literature (Latin: Runer seu Danica literatura antiquissima) which was written by Ole Worm and published in 1636.

The author of this book had mistakenly translated an Icelandic quote from Krákumál, which reads ”drekkum bjór af bragði ór bjúgviðum hausa”, and that was translated into ”to drink beer at once from the curved branches of skulls”.

This meant that he wrote this misconception into his book as:(In Latin: ”Sperabant Heroes se in aula Othini bibituros ex craniis eorum qvos occiderant.”)(In English: ” The heroes hoped to drink in Odin’s hall from the skulls of those they had killed.”)

The Vikings did not drink from the skulls of their enemies, and there is also no evidence to claim that they did, the myth can be traced back to this book. However, there are other stories from this time period, where some people, in fact, did drink from the skulls of their enemies. For instance Krum, who was the Khan of Bulgaria from 803CE – 814CE, he has been depicted as drinking from the skull of Nikephoros I, who was the emperor of the Byzantine empire. But if there is some truth to that, and if he really drank from the emperor’s skull, or if it is just another myth, that is not something I can tell you.

Raising a drinking horn and saying the word ”Skól” is a familiar scene to many people, but what does the word even mean. The origin of the word ”Skól” comes from the Viking age when the Vikings sat around the fire in their longhouses and shared a bowl of mead or ale. The bowl was passed around in a circle to all who was present, and each time before someone drank from the bowl, he would raise it up in the air and say ”Skól”.

This was done to show respect and to honor everyone around them, and might also have been done as a party greeting like it is still done in Scandinavia today. The word ”Skól” literally means bowl in all of the Scandinavian languages, for instance in Danish it is pronounced ”Skål”.