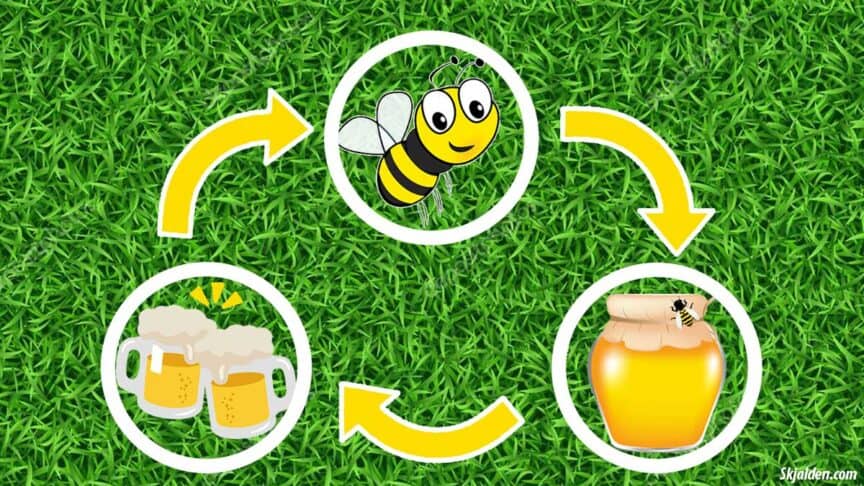 The other day I was sitting and looking out of my window while drinking my morning coffee. It was a sunny day with a blue sky, and people were busy getting to work, cars were driving by, and people were hastily walking down the street to catch their bus.

It is summer, and the time of year, when nature is coloring our surroundings with every color you can think of. Flowers are blooming, bees are buzzing, and colors are bursting into life, in the darkest places on my street.

I sat there, and of all things, I was watching this plastic bag dancing in the wind, and I thought to myself, we often take this beautiful nature around us for granted. I could probably go anywhere on the planet, and even to the most remote location I can think of, and at my arrival, I would probably be greeted by another dancing plastic bag.

It is indeed an overwhelming problem, and just thinking about it can make you feel hopeless and worried about what is to come.

While I sat there, I started to watch the bees crawling on the flowers just outside my window, as if they were ants who had just hit the jackpot by discovering a lollipop on the ground. This inspired me to make this article/video, which is a bit different than they usually are.

Beyla the Goddess of Bees in Norse mythology

Let us start by looking at what is mentioned about bees in Norse mythology. People who have read the old Norse sagas will nod to the fact that the sagas are often written in code, which often leads people to interpret them in many ways. The spider web that we call the internet is filled with claims about this and that from Norse mythology, and one of these claims is that there is a bee Goddess named Beyla.

Beyla is the wife of Byggvir, and both of them are the servants of the God Freyr. There is in fact, not much written about Beyla or her husband, and the claims that she is a bee Goddess is ridiculous in my opinion, but you are of course entitled to have your own opinion, just like I have my opinion. Some people have speculated that her name might mean either ”little bean” or ”bee”, something that I can neither confirm nor deny from my research on this.

From what I can read in the Poetic Edda, she is nothing more than a servant that serves mead for the Gods and Goddesses in Asgard, and the small bits that are written of her can pretty much be read in Lokasenna.

Beyla said:
”The mountains shake, and surely I think
From his home comes Hlorrithi now;
He will silence the man who is slandering here together both gods and men.”

Loki said:
”Be silent, Beyla! thou art Byggvir’s wife,
And deep art thou steeped in sin; A greater shame to the gods
came ne’er, Befouled thou art with thy filth.”

There is not really anything written about bees in Norse mythology, and if anyone could be the bee queen in Norse mythology, it would make more sense if it was Freya who is the Goddess of love and fertility. If we want to read about bees from the Viking age, we need to look up the dusty old scrolls that were written by the Anglo-Saxons, but here, there is also no mention of a bee Goddess, but only of the use of honey and the warnings of the bees. An example of this poetry can be read in the Exeter Book.

I am man’s treasure, taken from the woods,
Cliff-sides, hill-slopes, valleys, downs;
By day wings bear me in the buzzing air,
Slip me under a sheltering roof-sweet craft.

Soon a man bears me to a tub. Bathed,
I am binder and scourge of men, bring down
The young, ravage the old, sap strength.
Soon he discovers who wrestles with me
My fierce body-rush-I roll fools
Flush on the ground.

Robbed of strength, Reckless of speech,
a man knows no power Overhands, feet,
mind. Who am I who bind Men on Middle-earth,
blinding with rage? Fools know my dark power by daylight.

Honey bees are dying at an alarming rate

Today, the honey bees are struggling, and many of them are disappearing at an alarming rate, and in a world without bees, fruit, chocolate, and mead would be a luxury product reserved for the rich.

Why do the bees disappear?

There are a few known factors why the bees are disappearing, parasites, pathogens, pesticides are just some of the obvious answers, but also poor nutrition due to the loss of habitation, which is one of the major factors that seem to be overlooked, many bees are simply dying because of starvation.

If you look outside your window you might see a green landscape, even if you live in the city. But how many flowers do you see? This problem is not just an urban problem but also something that is happening in the countryside.

Of course, there are many trees and fields when we leave our cities, but the amount of flowers is not enough. It is in the spring and the early summer months that is the best time to be a honey bee, but the nutrition that is available slowly disappears in the middle of the summer.

We have Lost the Connection to Nature

An increasing number of people move to the bigger cities across the planet, and the effects of this urbanization, have many consequences on the environment. These concrete jungles leave little to no room for our wildlife, and the flowers that do fight their way through a crack in the ground will quickly end their fate under the shoes of a pedestrian.

Nature has been domesticated and put into reservations, only to be enjoyed on a run through the local park. We are not at the brink of no return, but if all the honey bees suddenly died, we would have a huge pollination problem. Our fruit trees would simply not be able to produce the amount of fruit we needed.

We can turn it around, and we should start thinking about how we make the nature part of our cities, which means architects need to rethink their approach to how they are designing our cities. Our cities should not only be green, but they should also be filled with trees and flowers, this would not only help the bees but also make our cities colorful and full of life.

Sitting on our hands and expecting others or the government to fix it, is not the solution. We can change it together, and I invite you can be part of it. I made a list of bee-friendly plants, that you can grow in your garden, on your balcony, or even at a spot in your local area.

These plants will help the bees and other insects that are struggling and need a helping hand. You don’t need much experience to do this yourself, a bag of seeds and a bit of water and you are good to go. Let us help the bees in our local neighborhood, by creating an oasis of flowers on every corner, and do something ourselves to create a better environment for our hardworking honey bees.

Don’t wait until your cup runs dry, and you are forced to drink synthetic mead, think about what you can do today to save the honey bees, even if it is just in a small way, all your actions today count towards a sweeter future, SKÅL!

Best plants for bees for each season