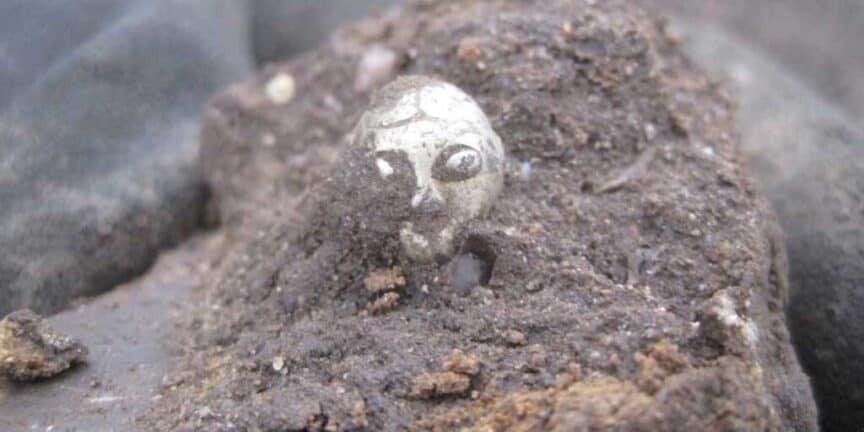 While walking around on a plowed field in Hårby with their metal detectors, one of them suddenly heard a beeping noise. He took out his spade and dug in the half-frozen soil, and to his surprise, a little face looked right back at him.

This face was the face of a Valkyrie, this small jewelry that has not been seen by anyone for more than 1200 years, or in other words, this Valkyrie dates back to the early Viking age. Nothing like this has been found, so there is nothing to compare it to, unlike Thor’s pendant, which has been found all over northern Europe.

The four amateur archaeologists knew what they were doing, and did not pick Hårby at random. There have been found many items from the Viking age in this area. Odense City Museums has also dug in this area before and they found workshops, silver coins, bronze jewelry, and other items from this time period.

There are many amateur archaeologists in Denmark who find 1000s of items each year, and it seems that this number is increasing each year. So the experts at the museums are not lacking anything to do and constantly tries to catch up with all the new discoveries.

The Valkyrie could have ended up as a silver lump

The description of the Valkyrie

This beautiful Valkyrie is made from silver and gold plated, parts of it have been coated with niello, which makes some of its parts appear black. The silver figure is only 3.4 centimeters (1.33 inches) tall and weighs 13.4 grams (4.72 ounces).

The Valkyrie has a long dress with a V shape whose details are highlighted with niello and with engraved patterns. Its face looks feminine with a small mouth, a strong chin, wide nose, and big almond-shaped eyes. The hair has a middle parting and its gathered in a tight knot with the rest of the hair hanging on her back like a ponytail. On its right arm, it has a ring and a sword in its hand. In its left hand, it has a traditional Viking shield.

It is unclear what the practical function of the figure was, and this is because the lower part is missing. The figure could have been on a staff, and been used by a fortune-teller also called a Völva (Vølve in Danish) for one of their rituals. It could also have been used as jewelry to hang around the neck. Or maybe it was part of an outfit and hung around in their belt.

The Valkyrie was made from silver coins

The Valkyrie is probably made from smelted Arabian silver coins, which as has been found in the area, and is probably from one of their many Viking raids or travel expeditions. This is also one of the reasons why it is dated to the Viking age since silver was not common in the iron age.

The experts think this little silver figure is a Valkyrie and not a shieldmaiden, this is because other jewelry that dates to around the 800 century has many of the same details as this figure. But those were only two-dimensional and not three dimensional like this figure from Hårby. This three-dimensional figure gives us a very rare and detailed insight into the Viking era’s clothes and hair fashion.

What is a Valkyrie?

A Valkyrie which means ”chooser of the slain” are female warlike virgins, who ride on horses in the sky and hover over the battlefield, like birds over their prey. The Valkyries would decide the outcome of the battle and choose who among them would die and take them to Folkvagr and Valhalla. A Valkyrie would sometimes fall in love with one of the fallen warriors, but it would rarely end in a happily ever after scenario.

Is it really a Valkyrie?

While I was researching this, I thought is it really a Valkyrie? This one was found in 2014, and it is believed to be a depiction of the Goddess Freya. How they decided it was her, is beyond me, it looks both masculine and feminine to me, and does not fit the description of Freya from Snorri Sturluson‘s Eddas. Freya is associated with both love and fertility, which I have a hard time seeing in this one, and would probably be more obvious to see.

I tried to put them next to each other to see if it made more sense to me, which it really didn’t. But I did notice that the one on the right, the one the experts call a shieldmaiden, does look a lot like the one they call a Valkyrie.

The way it is positioned and look to the left, with a helm or long hair, a dress with similar patterns, a sword in the right hand and a shield in the left hand and again some of the patterns on the shield also looks somewhat similar to the other shields.

And I am actually still wondering if they got this one right and if it’s a Valkyrie or a shieldmaiden. It does not really mean that much to me besides my own curiosity. But no matter the answer this Valkyrie is one of my favorites and I did see it for sale on some of the Viking markets last summer. I would have liked to get it, but it was outside my budget, and I really wanted it in silver.