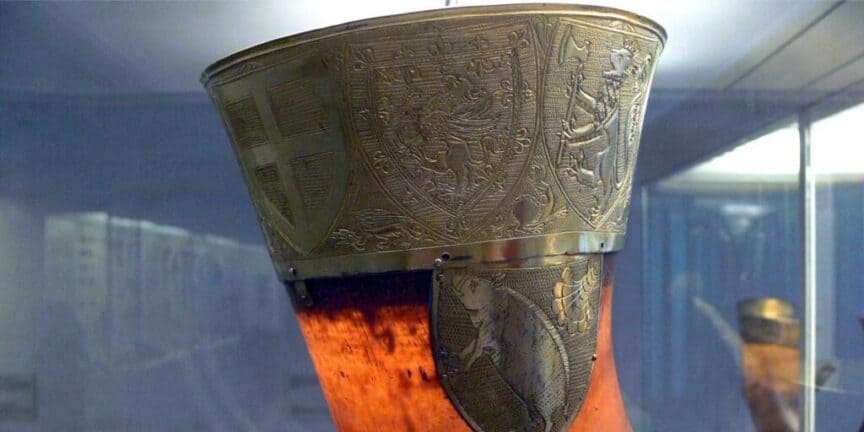 According to the Norwegians, the Danes should return the King’s horn or King horn, I am a bit unsure how to translate it (kongshornet). Anyway, the Norwegians believe that this horn is a special symbol to Norway. This horn dates back to around the 14 century when Håkon Magnusson VI (6) was King of Norway.

This 86 centimeter (around 34 inches) Kings horn is made from aurochs, which most likely was imported from what today is Poland. A horn-like this would be something that probably impressed a royal court, a was the biggest and most beautiful horn you could get.

The reason why it is called the Norwegian Kings horn is because of the beautiful Coat of arms in gold plated silver on top of the horn. The coat of arms with the lion standing on one foot with an ax in its hands is the official coat of arms of Norway. This King’s horn has been used by the Norwegian royal court as a drinking horn and has probably been filled with beer, mead, and vine.

The Norwegians want the King’s horn back before the year 2020, so it can be exhibited in Oslo, where a new national museum opens. This decision is not something the Danish national museum can take, it would have to be a political decision.

While I do understand that the Norwegians, want their King’s horn back to Norway. It can also be a slippery slope because what if another country, let’s say England, wants something back from a former Viking raid? My suggestion to the Norwegians is, put something on the table in trade for the Danes, which has the same historic value for the Danes, and I am sure the Danes are more willing to make the trade.

But no matter what happens we have to remember, that we share a lot together both culturally and historically, and we are more or fewer brothers and sisters, only divided by Skagerrak. Do you think the Danes should give the Norwegians the King’s horn back? Or should they just keep it in the Danish national museum in Copenhagen.