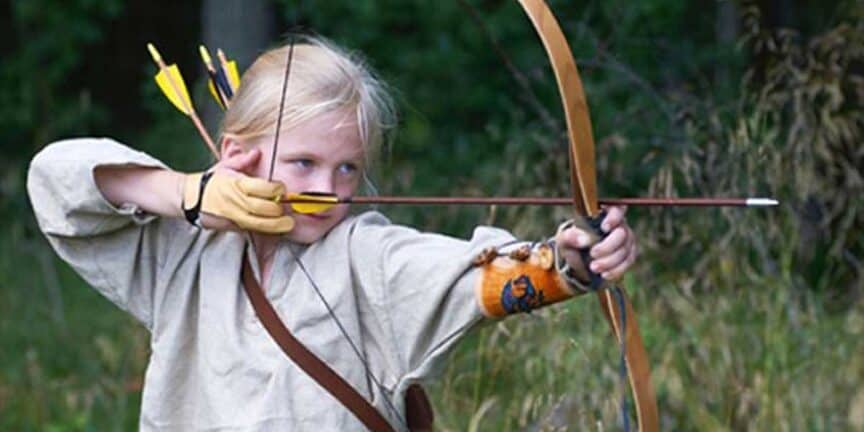 Have you ever wondered how it was to be a child in the Viking age and what kind of a Childhood would you have had if you lived in the Viking age? I hope you are curious about this question because that is the topic of today, so let’s dive into it.

The knowledge we have available today on how it was to be a Viking child is, of course, very limited, but we do have a few sources, such as the Icelandic sagas and many of the conducted excavations throughout Scandinavia.

Okay, let’s take a look at what we know, the life of a child in the Viking age was as you might already have guessed very different than it would be today. A child’s life in the Viking age was not separated from the adults, and they were definitely not wrapped in cotton as many are in our modern society.

Some things have of course not changed, small children required a lot of time and energy, but as soon as they were old enough they had to help and do their part in the household.

Child mortality in the Viking Age

As if life was not difficult enough for a child in the Viking Age, they also had high mortality, and many children died when they were very young. A child that was born in the Viking age first had to survive the dangers of being born, and the odds were definitely not on their side.

If a child was born sick or deformed or if the parents could not afford to feed their newborn, as harsh as it sounds the baby was thrown outside and left to die. Unlike today, children in the Viking age were very vulnerable to common diseases, to which there was little to no treatment.

This sometimes makes me wonder why people today refuse medical treatments for their children such as vaccines. A child that does not get vaccinated does not only pose a danger to their own child’s health, but also to the children of others, and therefore increases the risk within the society of outbreaks of deadly diseases.

Children born outside of wedlock

We all know that there are no perfect societies, and in the Viking society children would sometimes also be born outside of wedlock. But what would happen to these children and how would these children be treated?

No matter how unfair it sounds the fate of these children, would be in the hands of the man of the household. Only if he accepted them into the household and therefore the family, would they gain the same rights as his own children. However, if he refused, they would most likely die from starvation or spend their childhood in poverty with their mother.

What was the average life expectancy of a Viking?

If you were born in the Viking age, you would probably not have a long life as many people have today. The average life expectancy in the Viking age was around 40-45 years, so it was necessary that the children became mature at a younger age than today.

The age of the majority in the Viking age was around 16 years for a boy, a girl was considered an adult when she got married. I am sorry if you think that women drew the short end of the stick, and some of you might be surprised hearing some of these things after hearing about shieldmaidens and equality in the Viking age, but this channel is about facts and not about imaginations.

There was more equality in the Viking society than in any other society at this time in history, but it was definitely not 50/50 as some like to believe, but I will get more into that in the future, so stay tuned for that.

Children were very important in the Viking age, even though they demanded a lot of time and resources, but if you wanted your bloodline to continue, today there was really no way around it.

Did Vikings go to school?

The children in the Viking age would often follow in their parents’ footsteps, which means, if their father was a blacksmith then the son would probably also become a blacksmith. It was the responsibility of the parents to teach a craft to their children, so they would be able to fend for themselves when they got older.

The children did not go to school in the Viking Age, so they had plenty of time to help with many of the daily chores. It was not just limited to things in the household such as taking care of the fireplace or cooking. They were also helping with the animals, working in the fields, and gathering wood, or fruit and berries from the forest.

But it was not always the case, that the children would follow in their parent’s footsteps. Children could be sent to foster care by their parents at some of their friends, relatives, or even strangers, and this would typically last their whole childhood. This could have been a good way to tie close ties to other families, create a bigger network, or even give the children a chance to learn a different craft than what their parents could teach them.

Life was not just all work in the Viking age

Children in the Viking age did not just work, they also had fun and played with toys, so it was not as grim a Childhood as you might imagine. There have been found toys such as swords made from wood, animal figures, and even board games, which you can read more about in what did Vikings do for fun article.

Some toys were of course made with a purpose, for instance, weapons. Even though a bow was made as a toy, and it was meant to be used as entertainment, it still worked just like an adult bow, and helped the child learn how to use a bow from an early age, which was a good skill to master if you wanted to go hunting.

Some of my thoughts

Just like it was in the Viking age, I still think that one of the noblest acts you can do is to raise your children because they do still take care of us when we get older. And by that, I do not mean like we used to do in the west back in the day, and how it is still done in many of the developing countries, where their children literally take care of their parents later in life.

Our children will take care of us in other ways, they will be our doctors, nurses, farmers, firemen, and many other important jobs for our society.

We have to keep in mind that the circumstances were very different in the Viking society and it was course not all as bad as it might sound, they made the best of what they had, and lived a good life.