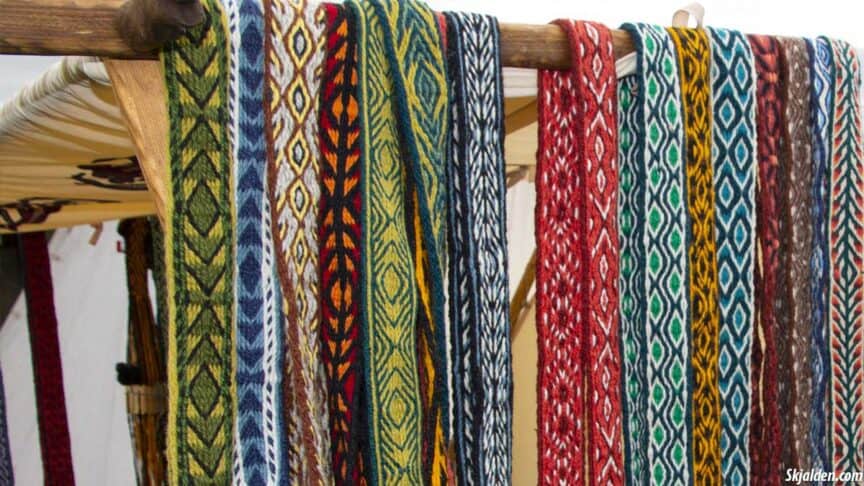 Our knowledge of the colors that were used during the Viking Age derives from excavations of burial sites, where the archeologists have been lucky enough to find remains of textiles. The people buried at these sites were mostly from the upper class, and therefore it is anyone’s guess if the common people wore colorful clothes.

The people back then would not have been that much different than we are today. They would still have tried to look their best, and colors were, of course, a part of that. Also, common people back then were not dirt poor, they had access to resources, and even those who had less than others would still have found a way to improve their appearance and status in society.

The lady of the house would probably have spent the long and cold winters inside the house around the cozy fire while making new outfits or repairing the old ones for the members of the house.

Fashion was also a thing back then, but it was not something that changed on an annual basis or each decade. Fashion changed over a much longer period of time.

Some ideas they came up with themselves, but they were also inspired by other societies on their many journeys. I can imagine the men bringing new pieces of clothes back to their women, for instance, from the Mediterranean or the British isles.

The common folk would, of course, not have been able to decorate their clothes with gold, silver, fur, or even silk, but there is no reason why they would not have used colors on some of their outfits.

The clothes were very different from male to female, women wore an underskirt made from flax or linen, and a long dress or skirt made from wool. If it were cold outdoors, they would have used a scarf and a cloak that could be closed on the chest.

The men wore a long shirt, and short or long pants made from flax or linen. When outdoors they wore a jacket or a cloak, but instead of closing the cloak with a pin at the chest, the men closed it at the shoulder. The men also used a cap, especially during the winter. You can read more about their clothes in the article, clothes in the Viking Age.

For many thousands of years, and at least since the ancient Egyptians who built the pyramids were around, have woad been used to produce blue dye for textiles.

Many thousands of years later, in the 15th century, Toulouse in France built a big part of their economy by exporting this blue dye to foreign merchants. So it is safe to assume that it has been in use for a long period of time, across many cultures and countries.

Woad (Isatis Tinctoria) was also used by the Vikings, and it grew widely throughout Scandinavia during the Viking Age. It can often be found in coastal areas where the plant has access to rotting seaweed which is a great source of nutrition for it. However, it can also be found less frequently on the roadside.

Woad has a short growing season, and it is during May and June that it can be found in abundance. The plant can easily be recognized, it has a height between 30 to 150 cm, the leaves are bluish, and the flowers are yellow and between 3-4 mm. As you might have guessed it is the leaves that are used to make the blue dye.

The process to extract the color is very straight forward, yet pretty disgusting. First, the leaves have to be chopped and then crushed thoroughly with a stone. The next step is to squeeze the juice out while shaping the leaves into small tennis balls. These small balls should be placed at a spot where they can dry out completely. At last, the dried woad has to be dissolved in fermented urine and placed somewhere warm, and then it will be ready for use. I am sure this fills up the neighborhood with a magnificent smell.

Woad has previously been considered a rare color by some scholars, at least in Scandinavia, but this does not seem to have been the case. Examples of textiles that have used this blue color have been found from archaeological excavations in and outside of Scandinavia, for instance, the grave from Mammen in Denmark, and an old dye shop in York from the 10th century, which was at a time when York (Old Norse: Jórvík) was under Danish rule, and part of Danelaw.

We also know according to tests conducted on textiles found in (Vestlandet) the western parts of Norway, that blue was used to color their underwear. So when they even used it to color the underwear, it couldn’t have been that expensive.

Madder, also called dyer’s madder, was used to produce a red dye, however, this plant is rare in Scandinavia, and, therefore, it was most likely imported from Germany, France, or the British isles.

The plant can grow up to a height of approximately 150 cm, the leaves are 5-10 cm long and 2-3 cm broad. The yellow flowers are between 3-5 mm, and it’s in season from June to August.

The whole plant has to be dug up because It is the roots of the plant that can be used to make the red dye. However, it can be a good idea to let it grow for a few years, because the older the plant, the stronger the red color will be. When harvested, the roots should be cut into smaller pieces, and then left somewhere warm to dry.

It was probably this red color that was used to dye the raven banner, which was, according to the monks on the British isles, the flag that was used in war by the Vikings.

The plant called Hedge bedstraw grows in many parts of southern Scandinavia. It can be found between June and August on grassland, at the forest edges, and along roadsides.

It can grow up to a height of approximately 25 to 120 cm. The leaves are ovate with pointed tips, split into wreaths of 6-8. The flowers are white and can have a diameter between 1 to 1.5 cm.

Just like other plant colors, the colors from the roots can vary quite a bit. When the roots are used for the first time, they will have a strong orange color, when the dye begins to fade it will become yellow, pink, and then eventually it will have a similar color as the complexion of a native from Scandinavia.

The orange color from this plant was probably called bleikr by the Vikings. A word that according to Dr. Jackson Crawford was used to describe a warm color in Old Norse, for instance, the color of yolk. And, yes, the color of yolk is actually closer to orange than it is yellow when the egg has been laid by a healthy hen.

If you don’t believe me then buy a pack of organic eggs the next time you go shopping. Not only is the color warmer like a sunrise, but it also contains more nutrients, and has more omega-3 fatty acids and vitamins. and personally, I think they taste better as well.

If we look at the Icelandic language, which often has been compared to Old Norse, their word for orange is appelsínugult and not bleikr. Bleikur in modern Icelandic means pink, therefore, the word must have changed meaning since the Viking Age.

Appelsínugult is a combination of two words, the fruit “orange” (appelsínu) and the word yellow (gult). We know that this is a modern word because oranges were not something that you could purchase in Scandinavia during the Viking Age.

Heather was used as a yellow dye. It can be found from August until September on nutrient-poor, often acidic soils in coniferous forests, raised bogs, on heaths, dunes, and overgrazing. In Denmark, this kind of landscape is very common on the peninsula of Jutland, including some of the small isles, however, it can also be found on Bornholm in eastern Denmark.

The plant can grow up to a height of roughly 60 cm, its leaves are needle-shaped, with clusters of red-violet flowers.

Scentless Mayweed is kinda an odd name for this plant since it does have an odor that is actually quite unpleasant. It can be found growing from June till October throughout Scandinavia.

The plant can grow up to a height between 30 to 60 cm, and it has 12-20  tongue-shaped fringe white flowers around a yellow floret.

The plant was used to produce dark yellow, but it was probably not one of the preferred colors by the upper-class since it seems to grow everywhere in Denmark, and probably in the rest of Scandinavia, so it must also have been very common back then.

The green dye was made with the plant called Greater Knapweed, this plant can be found in areas with dry grassland and hedgerows during July and September. It is pretty common in Scandinavia, and that was probably also the case back then.

The plant can grow up to a height of roughly 90 cm. The florets are red-purple, and the leaves are alternate, pinnatifid, and stalks.

This is not only a plant that is useful for making a green dye, it is also one of those bee-friendly plants, that I would like to see more of in the landscape. Many people are becoming aware of the decline in bees and butterflies, and in Denmark, many people have started doing something about it by having wild gardens to help create a better environment for them. This is not only great news for our environment it is also great news for people who are lazy garden owners.

Tansy is another wildflower that is common in Scandinavia. It can be found at the beach and along the roads from July till September. It can grow up to a height between 50 to 100 cm, and it’s pretty easy to spot in the landscape with those big yellow button-like flowers.

Weld is quite an uncommon plant in Scandinavia, but it can be found at beach embankments and fallow fields from July till August.

The plant can grow up to a height of roughly 50 cm, and it can be recognized on its small flowers along the stem, and it’s strange looking leaves.

This was not a cohesive list of all plant dye colors that were used in Scandinavia during the Viking Age, there were probably other plants that have not been mentioned, but these colors, red, green, and blue are the three primary colors, and therefore, they could have created any color they wanted.

Since they could use woad, weld, and madder to make the three primary colors, they were probably making more colorful clothes than what has previously been portrayed in series and movies. The gray, dark, and cold images of the Vikings should be labeled as a misconception of the past, they were much more colorful than what we give them credit for.

We know based on excavations that the most popular and widespread color during the Viking Age in Scandinavia was blue, red was also popular but fewer people could afford it.

These two colors are still reflected today on the national flags in Scandinavia. Denmark, Sweden, Norway, Iceland, and the Faroe islands use either one or both of the colors on their flag. Finland which is not part of Scandinavia, but is part of the Nordic countries also has a blue color on their flag.

In general, excavations seem to indicate that colors were used as a regional identity. While the blue color was widely used in Scandinavia, the British seem to have preferred red, with the exception of the Irish, who seems to have preferred purple, at least according to findings from Dublin.