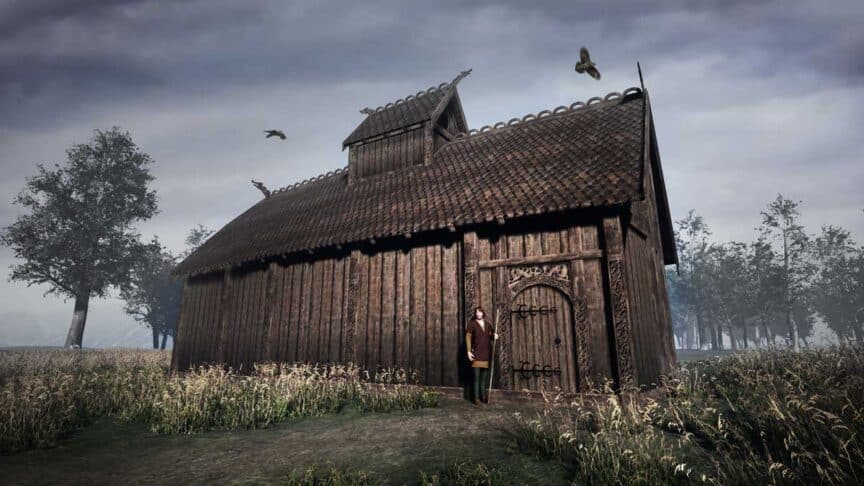 While most people were spending their time indoors streaming movies in 2020, a group of archaeologists from the University Museum of Bergen were out in the field digging holes in the ground. In the western part of Norway, at the municipality of Ørsta, the remains of what is believed to have been a pagan place of worship have been discovered.

This is to some extent a groundbreaking discovery because this is the first of its kind that has been found in Norway. Previously, there has only been found jewelry and other objects of worship of the pagan gods.

The building has been measured to have been 14 meters long and 7 meters wide and shaped in that classical boat-like style with curved walls with six strong pillars at its side to support the roof.

Inside the hall, there were an additional four pillars, which together formed a room of 3 x 3.5 square meters, that according to the researchers could have been a tower-like construction as it has been seen before at the hall in Tissø, Denmark, and in Uppåkra, Sweden.

According to Søren Diinhoff who is an expert on buildings from the Viking Age, and a researcher at Bergen University Museum. The hall was most likely used for religious gatherings in the summer and winter solstice.

Sacrifice to the pagan gods has clearly happened here, there have been found traces of campfire sites around the building. Which could have been used to prepare consecrated meals from sacrificial offerings as we know they did according to the Icelandic sagas.

Of course, we have to be cautious when we make use of these sagas as empirical evidence since some elements could be inaccurate. We have to keep in mind that many of these sagas were written down 300 to 500 years after they occurred.

While some elements could have been fictitious or misunderstood through hundreds of years of oral storytelling around the campfire, the main parts of the sagas do seem to be true.

For a lack of a better word in English, temples and other bigger halls were used to conduct offerings and religious ceremonies to honor the gods. The people who attended these rituals would bring animals to be offered. They would be sacrificed outside, and the meat would be cooked at the fire inside or near the building.

The blood from the animals would be sprinkled on the walls, depictions of the gods, and the participants. During the ritual known as Jolablót, the people would often make oaths to the gods, these were taken very seriously by the others, and if broken, it could be fatal. So unlike the new year’s resolution where people promise things under the influence of alcohol, you better lose those five pounds if you said it at the ritual.

Food and lots of alcohol were always present during these blóts (sacrifices), where the participants toasted (Danish: Skål) with each other and hoped for riches and a fertile new year. Drinking was a requirement, and the phrase honey I will stir the horse home was unacceptable. By law, according to a blót in Norway, everyone had to drink a certain amount during the feast.

We know, according to previously conducted excavations at Tissø and Uppåkra, that the participants also sacrificed expensive weapons and jewelry.

Next to the hall, traces of an Iron Age settlement, including several longhouses were discovered. This could indicate that people have lived in this area for hundreds or even a thousand years.

Before all doubts can be removed, and before the theory can be proven that this was a pagan place of worship, the archeologists need to find objects that were used as offerings.

One thing that does pull it in the direction of a temple is the ancient burial mounds nearby. The word temple is actually a bad translation for this place, in Scandinavia we call it a “Gudehov”, which basically means sanctuary or a place of worship.

All through the archaeologists have already dug up 8.000 square meters, this excavation is still in the early stages, and there is still plenty of time for the soil to reveal its secrets to us.

I cross my fingers for my Norwegian brothers and sisters that this really turns out to be a place of worship. It is about time that they join this exclusive club, and this could be the golden ticket, it looks promising.