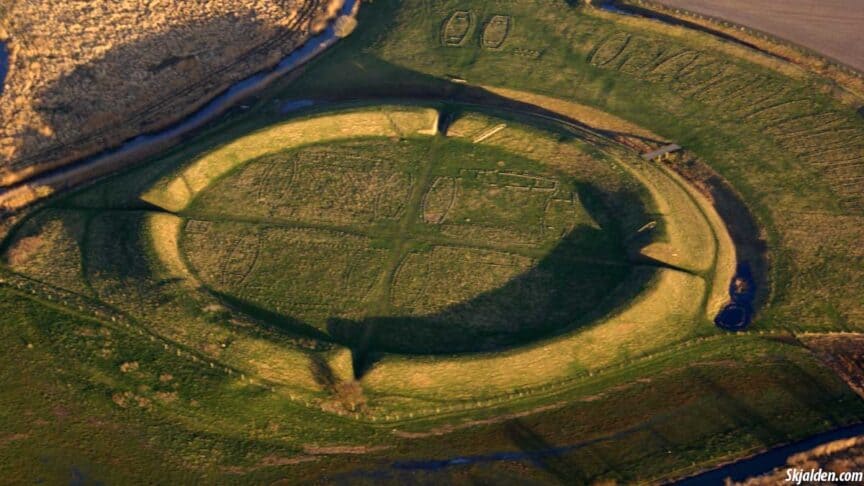 In Denmark near the city of Slagelse are the remains of the famous Viking fortress Trelleborg. This is a well-known spot for many Viking enthusiasts, and every year thousands of people come to visit.

Their biggest event is the Trelleborg Viking Festival which takes place during the month of July. I have been there a few times, and I enjoy the atmosphere while walking around seeing what kind of new stuff the creative people at the market have come up with.

Most of the stuff for sale is authentic, but there is room for interpretation, which leaves room for creativity, which I personally like. Besides the many merchants waiting for you to empty out the content of your wallet, the battle with hundreds of Vikings fighting or the last man standing battle afterward is enjoyed a lot by the many visitors.

Walking around this market I always wondered why Trelleborg is not as popular as Moesgaard or their annual Viking Moot which is held on the last weekend of July. So I was glad when heard that the plan to reconstruct a section of the Viking fortress will now become reality.

The project is funded by the taxpayers of the municipality of Slagelse, including huge donations from two private funds in Denmark (The Augustinus Fund, Bank Trelleborg Fund). These donations are a major reason why this important piece of history will be brought back into existence again.

It might be disappointing to hear that only a quarter of the fortress will be rebuilt, but this kind of reconstruction is extremely expensive. The sheer size of the area can also be hard to grasp by just looking at some images, but it is actually quite big.

According to the project leader, it is the plan to build the fortress by using as many of the same techniques from the Viking Age as possible. However, that is quite a big challenge because it has to follow all the building regulations, and it also has to be built in such a way that it will stand for many generations to come.

In total there have been found five Viking fortresses in Denmark, that all have been built in exactly the same way. All of them have been dated to around 979-980 CE, which was when Harald Bluetooth (Danish: Harald Blåtand) was the ruler of Denmark.

It is estimated that these Viking fortresses were only used for about five to ten years. The question of why they were built, or why they were abandoned after such a short period of time is still unknown.

There must have been a good reason to build them, especially when you think about the incredible amount of manpower it would have taken to build them. Which definitely would have had a severe impact on society. The King had probably ordered people to travel there in the thousands, which would have taken precious time away from farming and other important duties.

One of the theories of why the fortresses had to be built could have been because the Danes feared retaliation from the many raids along the southeastern coast of England which were led by Sweyn Forkbeard (Danish: Svend Tveskæg) and his large fleet of 90 ships in the 980s CE.

The British did try to stop him by paying tribute to him. The so-called Danegeld, but it was to no avail. The many riches, with few to none guarding them, were probably just too tempting for Sweyn to keep his hands of them.

According to the company in charge of constructing the fortress, the plan is to build a 15-meter long gate, where ⅔ of it will have some kind of backdrop or scenery at the sides to illustrate the extent of the defense, which may, or may not be completely historically correct due to lack of knowledge and the construction laws.

At the gate, a wooden bridge will be built, that will span over a one-meter deep moat, which was very common for these kinds of defensive structures.

What really made this fortress so strong, and probably also what it made almost impossible to defeat was the palisades on top and along the ramparts. These palisades were so tall, that the attacking army had to either climb it or burn it to the ground.

A palisade is pretty much just a fancy word for a defensive wall, often made from wooden planks, similar to the ones we have in this day and age to fend off our neighbors.

Palisades have been used in Denmark since the very first fortifications were constructed, but at Trelleborg, they took it to a whole new level by having internal rooms as part of the palisade.

The fortress wont just be another tourist attraction in Denmark. It’s the plan to use it for daily activities such as battles and exercises in how to storm and defend it, in order to try and understand their battle techniques. The researchers also hope that they will gain some understanding of why they chose to build it in such a unique way.

It is the plan that most of the construction will be completed by 2022, and I cross my fingers that it will be before the annual Viking festival in July. I can’t wait to go there in person and see it for myself, touch it, and walk around in the fortress.

It is only the defensive construction that is planned for now, but they have future plans to add two of the longhouses that we know were inside the fortification. However, if and when this will happen is still unknown, since they are still looking for funding.

Trelleborg and none of the other Danish Viking fortresses are among the UNESCO world heritage sites, but they have sent an application to get five of them recognized. These five are Trelleborg, Aggersborg, Fyrkat, Nonnebakken, and Borgring.