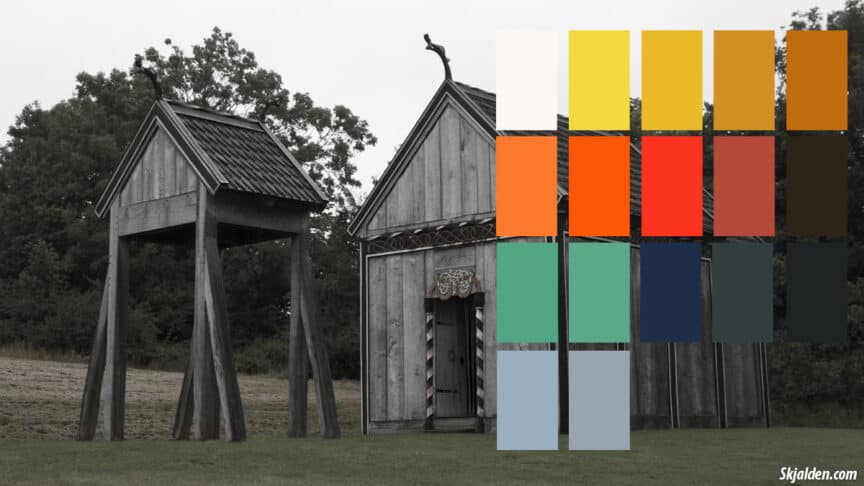 Have you ever wondered what kind of colors were used in Scandinavia during the Viking Age, and which kind of materials they extracted the colors from? If so, then continue reading, and you will be able to add the authentic Viking colors to your own palette.

The colors we are going to take a look at are those that were used on wood and other similar objects. None of these colors were used for textile production.

We know of 17 different colors that were used, these colors have been found by examining pieces of wood from King Gorm’s burial site in Jelling, and a plank from a stave church in Hørning, Denmark.

The examinations have shown that the Vikings used bold and bright colors. These bright and beautiful colors were probably a status symbol and used in order to stand out from the rest, something that seems to have been common practice.

The clothes they wore and houses that they had would have shown everyone that this family was having enough wealth to color their belongings in some of the most expensive and rare colors available.

The color pigments came from various sources, for instance, ochre and charcoal, which were mixed together with a binding material such as milk, egg, or linseed oil.

Some colors were rarer than others, and some were produced locally while others were imported. The cheapest color was black, and it was made from crushed charcoal, something that most people would have had access to.

Notice how similar the words are in all of the Scandinavian languages. Many of the words are also close to Old Norse, which enables most people to read and understand some or parts of the old texts.

Another common color was brown which was made from ochre pigments, these could be found in streams, so maybe they found a couple while fishing or bathing.

The brighter yellow color had to be imported since these orpiments do not occur in places such as Denmark. They were probably purchased from merchants along the river Rhine or in Constantinople (also called Miklagárd in Old Norse) since yellow orpiments could be found in central Europe and the middle east.

White was quite a common color since white lead was produced and traded in most areas in and outside of Scandinavia. White lead may also have been used by a Völva to paint her face white, and perhaps crushed charcoal was used around her eyes. A Völva (Danish: Vølve) is a woman who practices shamanism.

One of the reasons for this assumption of her coloring her face is that this has also been done in other cultures in Europe, and there have been found white lead in the grave of a Völva at the Viking fortress Fyrkat, Denmark.

The blue color was made from vivianite, which is an iron mineral that is common throughout Europe, however, it is unknown if this was considered a cheap or an expensive color in Scandinavia at this time.

Copper hydroxy carbonate (Malachite) was used to make the color green, it may have been imported to Scandinavia, and would, therefore, have been relatively expensive.

The bright red color was made from cinnabar, which was imported from Spain or central Europe. This color has been used since the ancient past in many areas in Europe, and was quite a popular color.

The dark red color was made from iron oxide, it was a quite common material, and probably not that expensive to buy.

Please keep in mind before you start coloring everything that you own with these colors, that the colors may not be exactly correct, but they are the closest ones that the researchers have come up with to date.

The colors are, in fact, so close to what colors are believed to have been used by the Vikings, that the royal Viking hall in Lejre, was on the verge to be painted with the use of them, but as of right now, it has not been painted, but I hope it will happen sometime in the future.

If it were to happen the Viking hall might be painted entirely white with the use of quicklime, which there have been found traces of at the royal hall in Tissø, but also at this one in Lejre.

The benefits of using quicklime, was probably to help insulate the building, and have a brighter interior of the house during the long and dark winters. The white color would also have been clearly visible in the landscape from afar.

It is possible that white was the base color, and the other colors were used to decorate the house or other objects, for instance, pillars that had been carved to depict the gods.

It is also important to remember that the Viking Age spanned over a long period of time, and the colors available, or the way they painted their houses could have changed quite a lot, just think about the interior design of the ’60s/’70s or ’80s.

Name of colors in Old Norse