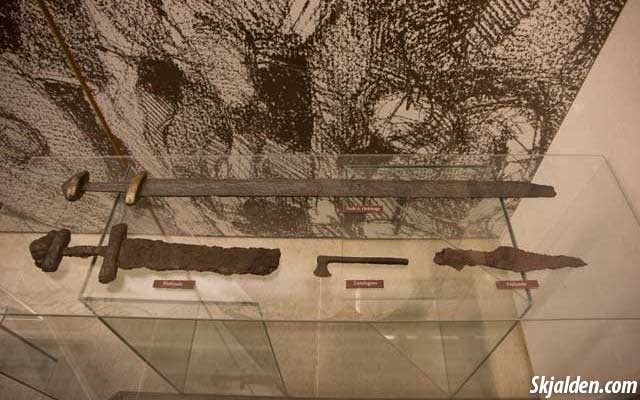 The Viking helmets were extremely rare and expensive and therefore typically only worn by very rich Vikings. You could compare it with owning a Lamborghini today, in fact, only one of these helmets has ever been found, it was in a war grave north of Oslo in Norway. As you can see the helmet has no horns, and there have never been found any Viking helmets with horns. However there have been found ceremonial helmets with horns, but those date back to the bronze age.

The sword was only for the wealthiest of the Vikings, such as kings or very successful merchants. The Viking sword was by far the best melee weapon and could be the deciding factor in any battle. A Typical Viking sword was about 90 centimeters in length, and the blade was often decorated with beautiful carvings and plated with silver or gold.

The handle would be decorated with precious metals and formed with ornate designs. The Vikings would often name their sword, and when he died, the sword would often be buried with him. But sometimes the sword would stay in the family, and be inherited by a family member. The Viking sword was a very costly weapon, and not everyone could afford to let it be buried.

The bow was very important and a crucial weapon at the beginning of a battle, this could be either be done by ship or on land. By shooting arrows at the enemy from a safe distance of about 200 meters, by doing this the Vikings hoped they could kill the first row of enemy warriors.

The Viking bows were made from either ash or elm, this is because they had a large buckle ability and therefore could send a powerful shot at their enemy. The bowstring was made from flax, and a total of the arc measured about 190 centimeters. The arrows were made in many different forms and in a variety of materials. However, it was common that the tips were made of iron.

The shield was a common weapon in the Viking age and was mostly used as a defensive weapon. The Vikings would stand in a special formation, either in one long row or in a triangle to create a wall of shields, which would overlap and make it very difficult for the enemy to break through. The Vikings would also use the shield in a battle to hit the enemy, so they would lose their balance, and make them vulnerable to attack.

The shield was often used in a duel, where they had the shield in one hand and either a spear, ax, or sword in the other. Some of the remains from the Viking age have shown that many, despite having the shield for protection, suffered many injuries in the lower region, and on the legs.

A Viking shield is round and is between 80-100 centimeters in diameter. The shield is made from wooden planks and held together by a strip of wood and animal hide. In the middle of the shield is an iron knob as a handle to protect the hand of the Viking. The handle of the shield is often the only thing that has been preserved after having been buried for more than 1,000 years.

Some of the axes were just simple and without any decorations. While others were artwork in itself with an inlaid silver thread with depictions of animals. Almost all of the axes had Christian or heathen symbols engraved on them and could swing with such force that it could split a helmet in half.