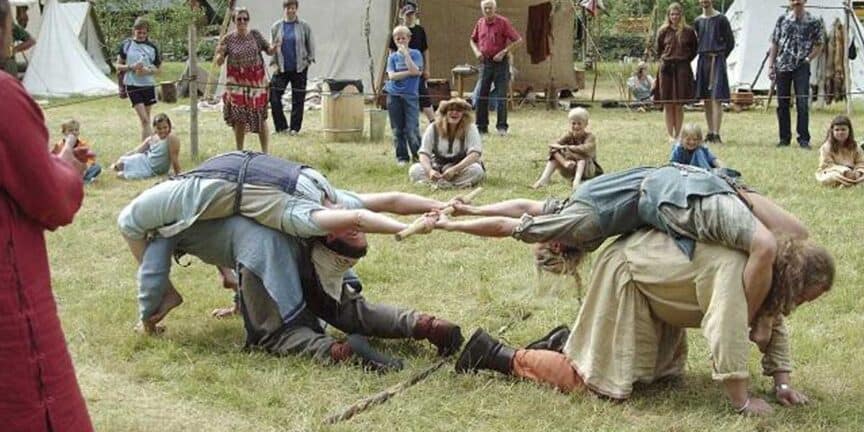 What kind of games did the Vikings play, when they were not busy with their daily routines. Just like today, life in the Viking age was not just all about work. There have been undertaken many excavations at Viking burial sites by the archaeologists, and not everything they have found has been was weapons, clothes, and treasures, but also games and entertainment from the Viking age.

The Vikings really understood how to have a great time, and I am not talking about raids or testing your strength with an ax on a monk’s neck. I am talking about games that the Vikings enjoyed playing among their own people.

Entertainment in the Viking age

Hnefatafl the Viking board game

Board games have been popular across many cultures for thousands of years, and it was no difference in the Viking society. One of these board games that was played in the Viking age was Hnefatafl, which dates back about 1500 years. Take a moment and notice how drinking from a Viking horn is depicted on the runestone, the tip of the horn is putting down and not up.

Unfortunately, we do not have the original rules of the game, so we can not say for certain how the game was played. It might have been played similar to chess, with one exception, they might have used dice to play Hnefatafl.

Wooden toys in the Viking age

We know from excavations that the children in the Viking age enjoyed playing with toys carved from wood. The Viking children played with toys such as a spinning top, swords, bows, and figures. According to the Víga Glúms saga, sometimes the toys were also made out of bronze, but that would probably only have been the wealthy families who could afford that.

The Vikings loved to run

Just like in the sagas the Vikings also loved to compete by running against each other, which was a great way to figure out who was the fastest among them. It is not always necessary to be the strongest, sometimes it is essential to have someone who is quick on their feet.

Which is also echoed in one of the Norse sagas from the Viking age, in the saga of Thor’s journey to Jotunheim. In this saga, Thor and his travel companions meet the Jotun called Utgard Loki, if you don’t know, a Jotun is a giant. While Thor and his travel companions were at Utgard, they were participating in many small competitions against Utgard Loki’s illusions. We can, for instance, read about the running competition between Logi and the child Thjalfi.

Winter activities in the Viking age

During the winter, there were other fun activities for the Vikings to entertain themselves with. Just like today, many people loved to ice skate in the Viking age, but it was not just for fun, it was also used as transportation. The ice skates in the Viking age were made from animal bones, from either a cow or a horse.

The Vikings also enjoyed skiing, and this ability has probably been passed down in the Viking DNA, which is why a small country like Norway, always is kicking your butt in the winter Olympics.

Give birth to a bear

One person lies on his back, the next person, who is the one that has to be born, leans forward over the person who lies down so their stomachs touch each other. The third person lies over them both so his head is facing the legs of the guy at the bottom. The person in the middle now has to try and squeeze out by moving forward.

Wrestling in the Viking age

The Vikings really loved to show their strength and flexibility, and because it was not always certain that you had a weapon available, you needed to be good at fighting with your hands as well, which is why they loved to wrestle. The Vikings had their own style of wrestling called Glima, in this style of wrestling, you fight on your feet and the first one who gets thrown to the ground loses the match.

Tug of war was another favorite game in the Viking age. Tug of war is a game where two teams are competing against each other, by pulling on the opposite ends of a rope. The goal is to pull the opposing team in their direction until they cross the line in the middle. The ropes were probably made from bark from a lime tree.

At the beginning of the game, each of the four players grabs onto one corner of the piece of leather. The goal is to pull the other players towards themselves, the first player that grabs one of the wooden sticks behind them, while still holding on to the leather has won. The game can also be played with a rope bound together, as you can see in this image.

Weightlifting in the Viking age

The Vikings were not really that different from us, they also loved weightlifting. Of course, they did not have all that fancy equipment we have today, and it was not really necessary anyway. There were plenty of big stones in the landscape, that could be used to see how we’re the strongest among them.

When the Vikings were not busy competing against each other, they loved to relax to some good music or stories told around the fire. The Vikings often had a person among them, who they referred to as a Skald. This was a person who was a good poet and storyteller and spent most of his time, entertaining the people with his stories about heroes and villains.

Because a Skald sometimes would travel from town to town and tell his stories, he might also have been telling them the news from far and wide. Some of you probably think it sounds just like a bard, and it is, just the Old Norse word for it.

I was inspired by this person myself, and that is the reason why I decided to name the channel Skjalden which is the Danish word for a Skald. The rune I use as the logo is the Odal rune also called the Othala rune and it is the symbol of inheritance, tradition, and homeland, which I think fitted very well to what I wanted to do. The Odal rune is not a Viking rune, the rune is from the Elder Futhark, which is from the iron age, which was before the Viking age.

This was not a complete list of all the entertainment that the Vikings enjoyed in their spare time, but I still hope you got a better insight into how the Vikings had fun.