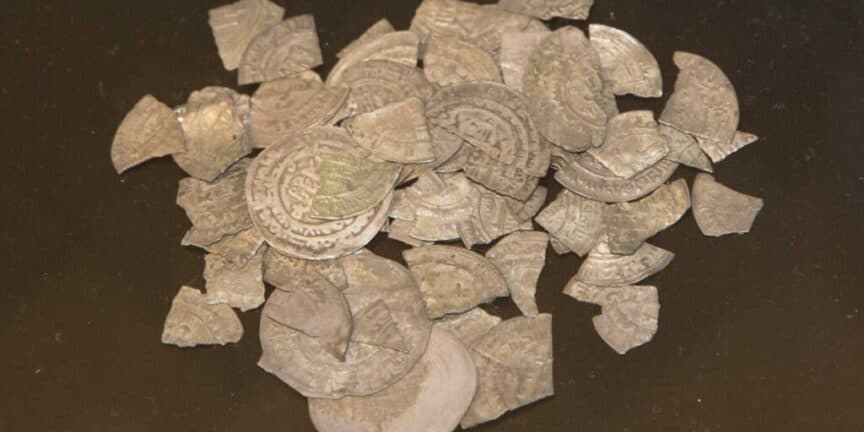 Three months ago the amateur archaeologist Réne Schön and his student Luca Malaschnitschenko were out searching for treasures with their metal detector on the northern part of Rügen island in Germany.

When suddenly the metal detector began to make noises, they started to dig a bit into the soil and saw a piece of metal shining in the winter sun. First, they thought it was just a piece of aluminum, but when they looked closer, they quickly realized that it was a piece of silver.

The Viking silver treasure was huge

Last weekend Rene and Luca teamed up with professional archaeologists to help dig up an area covering 400 square meters (4,300 square feet), and what started as a piece of silver turned into a big Viking treasure.

Braided necklaces, pearls, brooches, rings, Thor’s pendant, and up to 600 chipped silver coins were found. Including more than 100 pieces that date back to when Harald Bluetooth was the King of Denmark.

According to the archaeologists, the treasure might be from the late 980s, which really makes it interesting because that is when Harald Bluetooth fled to Pomerania. Rügen island is also not far from Jormsborg which is where the sagas tell us that Harald Bluetooth died.

The questions we can ask ourselves was the treasure linked to Harald Bluetooth, was this hoard maybe his? Could it really be that Harald stood here more than a thousand years ago, and dug a hole for his treasure.

Harald Bluetooth is credited with unifying Denmark and making the Danes Christian. But he made many enemies, and not everyone was happy when he turned his back to the Nordic Gods and converted to Christianity.

It was his own son Sweyn Forkbeard (In Danish: Svend Tveskæg) who started a rebellion against him, which eventually lead to Harald’s death.

You might have heard the name Bluetooth before, and that is because of Harald Bluetooth’s legacy still lives among us and chances are that you are holding one in your hand. Because smartphones use Bluetooth technology which is named after him, even the Bluetooth logo is a bound rune with his initials HB.