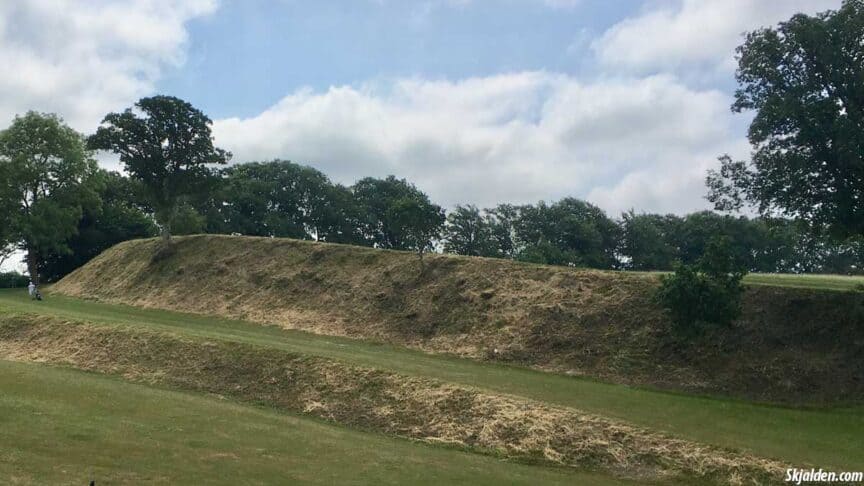 For hundreds of years, has what might be the biggest Viking fortress in Denmark, been hidden in plain sight on the island of Falster. The locals had always thought that there had been some kind of fortress in the area, but they were never able to find it and had therefore concluded that the farmers must have plowed it away long ago. The same conclusion was reached in the 1950s when an archaeologist conducted his research to try and find the fortress in the area.

In recent years, satellite images and LIDAR-technology have revealed that the remains of the fortress are still there. The images showed the researchers that it was so big, that nobody was able to see it in the landscape because they were literally standing on it.

The LIDAR-technology has paved the way for lots of new discoveries because it strips away all trees and vegetation from the landscape and creates a 3D image of the ground like it was done when they found the Viking ship at Gjellestad in Norway.

In 2016, the archaeologists made use of the carbon-14 method to figure out how old the fortress was, and it was these tests that indicated that it was built in the Viking Age, and stayed in use until the 12th century. If this really turns out to be true, it would mean that this fortress was being used at the same time as the ring fortresses.

The ring fortresses are defensive fortifications that have been discovered at multiple places in southern Scandinavia, and they are all believed to have been built during the rule of King Harald Bluetooth (Danish: Harald Blåtand), who was the King of the Danes from 958 until his death in 987.

But in contrast to the ring fortresses that were only used for a short period, this defensive structure on Falster is believed to have been used for 400 years.

It is unknown who ordered it to be built, there simply are no sources available. The only source that even comes close to mentioning its existence is the chronicler Saxo Grammaticus.

This could very well be this fortress, and when considering that the Wends would attack and raid the Danish coast for centuries after the Viking Age ended, it would make sense to maintain a fortress in case of an attack.

The Wends who were also pagan lived across the sea south of the island of Falster and would have had a relatively short journey to raid the island. Today the lands of the Wends are part of Germany and Poland. It really should be underlined again, that it is unclear if it even is this fortress that he is writing about, but it is possible.

When taking into consideration that this fortress was built in the 8th century, then it can only be described as enormous. At its prime, it was 78.000 square meters surrounded by bog and lakes, and at its highest places, it had ramparts that were up to 18 meters tall. Imagine having to run through a moat and up a rampart to attack the enemy. I can easily imagine that it would have taken a big army to attack it, but also to defend.

This fortress was not just a piece of decoration or a symbol of power. There are signs that the ramparts have been attacked and burned several times, but they were always rebuilt. According to the researchers, the fortress was expanded multiple times during the centuries, and this would have taken a lot of manpower and resources to do so.

Inside the fortress, there has been found remains of permanent housing, and this has led some of the archaeologists to believe that it was not just used as a refuge from attacks, but it may have been in use daily as some form of administration for the area, most likely controlled by a Jarl. Another theory is that it could have been used as a marketplace during peacetime or as a place of worship.

If new tests confirm that it really dates back to the Viking Age, then this could have a big impact on our understanding of this time period. It is these new discoveries in recent years, such as this fortress, but also the discovery of the fortress at Eritsø, which has made some researchers speculate if Denmark could have been unified earlier than what Harald Bluetooth brags about on the Jelling stone also called Denmark’s birth certificate.

Please remember, that this excavation is still in the early stages, but it will be interesting to see what it will lead to, but for now, we can only wait for more information to be released to the public.