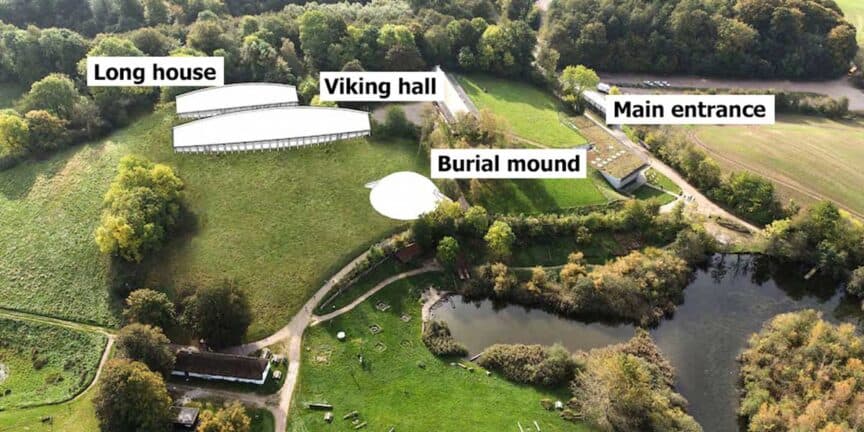 In 2009, on a field in the town of Gl. Lejre (Old Lejre) on the island of Zealand, the remains of one of the largest Viking halls that ever has been built in Denmark was discovered. This Viking hall originally had a length of a little over 60 meters, and 12 meters in width, with an impressive of 10 meters to the ceiling.

I think it is safe to say, that this large hall used to belong to a wealthy and powerful family which most likely was a King. Lejre seems to have had significant importance from the early Germanic iron age, into the late Viking age.

This Viking hall has been dated to be from around 700 CE, which was a time and place where the people in Denmark, were split into many tribes and kingdoms.

Lejre has often been mentioned in sagas such as (”Danish: Skjoldungerne”) from the Knýtlingesaga. Skjoldungerne literally means the ”Shield Kids” in English.

Skjoldungerne was the children of King Skjold (King Shield), who according to the sagas was the son of Odin and Rind. One of the descendants from Skjold might have been the famous Ragnar Lothbrok (in Danish: Regnar Lodbrog), but if he were around when this large Viking hall was at its prime, is something we do not know.

The large Viking hall is being rebuilt

While this discovery is exciting in itself, it does get even better. In 2015 a huge donation of 65 million kroner was made by the family who owns the shipping company Maersk, and in addition to this donation, the Augustinus fond donated 10 million kroner as well, to help reconstruct this magnificent Viking hall.

75 million might sound like an astronomical amount of money, but according to Tania Lousdal Jensen, who is an archaeologist and the project manager. It is not physically or economically possible to build the Viking hall in the same way as it was in the Viking age.

Our ancestors were very creative and skilled craftsmen, and some of their building methods are still a mystery to us, and the hall will never be an exact copy of the original.

The main goal of this project was to research the construction methods during the Viking age. However, there were made use of heavy machinery during the construction. The hall has also not been painted, which is believed to have been common practice, especially for a hall of this magnitude.

The Viking Hall has finished its construction, and you can see it in person at sagnlandet.