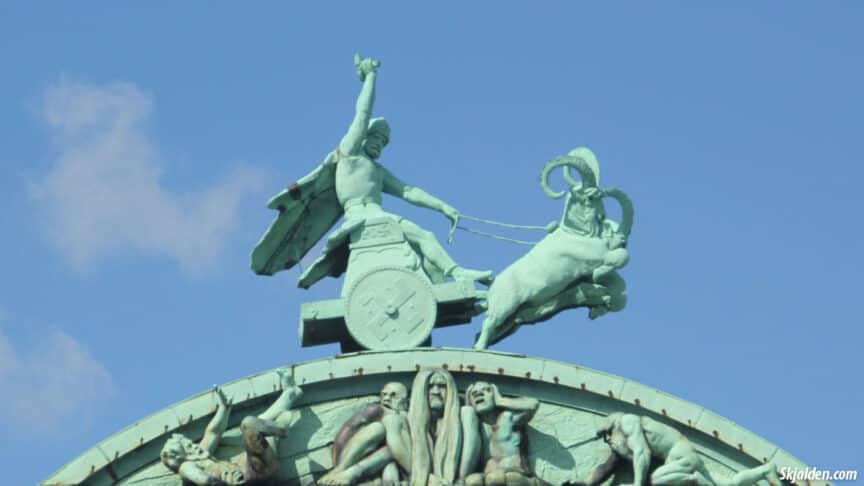 The Thor statue by Carl Bonnesen (1868-1933) is located on top of the main facade of the Carlsberg Brewhouse in Copenhagen. This statue has been standing here looking out over the rooftops since it was erected in 1901.

The sculpture is called Thor’s battle against the jötnar (giants), and it was originally a part of a competition where the winner would earn a spot at Langelinie. However, the statue didn’t please the judges, and, therefore, the competition was won by Anders Bundgaard who sculptured the Gefion Fountain.

The Thor statue is 4 meters high and 4.5 meters wide, and it is made from bronze which is the reason why it has that pretty greenish color. When bronze is exposed to the air it will oxidize the outer layer. This is a harmless process, and it does not cause the statue to decay or anything of that sort.

The statue is well-known to the locals, but many visitors don’t even know that it exists.

The statue depicts the Norse god Thor riding in his chariot while it is being pulled by his two goats, Tanngrisnir and Tanngnjóstr.

The wheels and the chariot itself are decorated with the swastika cross, an ancient symbol that dates back many thousands of years in both Europe and Asia. The symbol is left-facing, unlike the symbol that was used by the Nazis which was right-facing.

The symbol was part of Carlsberg’s logo until the 1930s when they removed it for obvious reasons. The swastika cross can also be seen on the huge elephants near the gate to the Brewery.