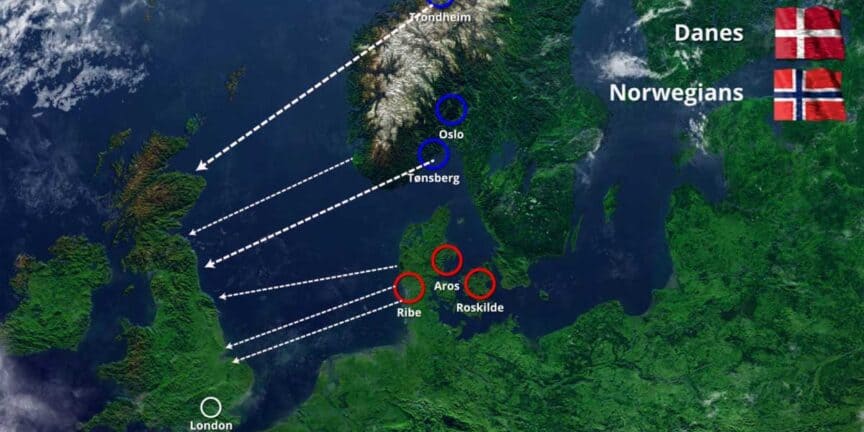 We will now take a look at what caused the Viking influence on the English language, and l will give you some examples on which English words that have an Old Norse origin, and are still in use today.

There have been speculations for some time by the historians that there was an overpopulation problem in Scandinavia during the 9th and 10th century. Something like this could have lead to a lack of fertile land and therefore forced the leaders of their local societies to use an ancient custom to resolve this problem, the drawing of lots. This ancient custom was widespread in Scandinavia during the Viking age, and this method of drawing lots, to prevent famine in Scandinavia has been documented in books such as in the saga from Gotland, the Gutasaga.

The losers were forced to leave their homeland with all their belongings and were condemned to live abroad. They might have had no other option than to fight people on the British Isles, to get a hold on some of that precious fertile land, so they could feed their families.

This is one of the many reasons, why the Vikings started to raid the coast of the British Isles. But I do not think that this land grab, only was done in the name of the ax, since there were huge areas in Britain that were uninhabited. Many towns in England was founded by the Vikings, and some of them still have their original names until this day.

Because of the lack of land in Scandinavia during the 9th and 10th-century, tens of thousands of people from Norway and Denmark crossed the sea and sailed to the British Isles to settle in England. It is estimated that from Denmark alone 35.000 people immigrated to England, it might sound like a very low number, but at the time it was around the same number of people who lived in London.

Because of the immigration from Scandinavia, the language the newcomers spoke had a big influence on the English language. It is difficult to say if it was the Danes or Norwegians who affected the English language the most because the two languages are so similar. And of course, either the Danes or the Norwegians speak the same language as they did 1000 years ago in Scandinavia. The language the Vikings spoke was called oldnordisk or directly translated into English Old Nordic, or as it is mostly referred to, Old Norse.

But something is for certain the Viking legacy is still very much alive in the British Isles and many towns in England still has the Nordic word for town, which is the word ”by”. For instance, the town Helperby in northern Yorkshire originates from two Nordic words put together. Helper which comes from the female name Hjalp and the Nordic word for a town which was ”by”.

Towns and places like Thornby, Denaby, Aby, Crosby, Earby, Thornaby, Kirby Cross, Hemsby are all probably founded by either the Danes or the Norwegians, so if your family has lived in these towns for many generations, you might be a descendant of the Vikings. But there are many more towns founded by the Vikings, in fact, the number is somewhere in the thousands, and that is just in England.

Viking towns are in the Domesday book

But we have to keep in mind that we cannot be 100% certain which towns that were founded by the Vikings. Since most places in England was not registered before the year 1086, when King William the Conqueror, ordered that all the owners of all the land in England and parts of Wales had to be written down for taxation purpose. All this information was put together in what would be known as the Domesday book.

But it was not just towns, roads and places that have names that originate from the Vikings. As I said earlier the English language has had a big influence on it from the Vikings. In fact, the words you use on daily basis, when you speak English, are full of old Norse words. English words such as sister come from the word systir in old Norse, the word for window comes from vindauga, and even common words such as ”take” comes from the old Norse word vanta. There are many many more words in the English language that originate from Old Norse, so I made a short list below for you to check out.

The Danes and Norwegians were curious societies, which is also why they loved to travel and trade so much with people in faraway lands. And exactly because of their curiosity they had daily interactions with their new English neighbors. They did not build walls around them and only spoke with their own kind, they were open and friendly with the locals.

Because of this it eventually leads to intermarriage and assimilation between the two cultures, which created a big melting pot of the two languages. In some parts of England, the locals still use old Norse words in their dialect which have not changed a bit since the Viking age, for instance, the word Grice, which originally meant young pig, comes from the Nordic word gris.

Other languages have also been influenced by the Vikings, such as the French and Russian language. For instance, the word for port side in French is called bâbord and comes from the old Norse word bagbord.

In the Russian language, the old Norse word holm which means hill in English is called xolm (холм) in Russian. The use of this word can especially be seen in the county of Archangel/Arkhangelsk (Архангельск) this area is located in the northern part of Russia, and it lies on both banks of the Northern Dvina river, with access to the White Sea.

In the same coastal areas of northern Russia, there are also places that end on ”nos” which comes from the old Norse ”nes”. It is really not a big surprise that towns and places in Russia would have names that originate from old Norse since the Swedish Vikings traveled east to settle there.

There has also been found many written traces of the old Norse language throughout Europe. Probably one of the most famous ones is the one in Hagia Sofia in Istanbul, Turkey. This city used to be called Constantinople and was part of the Byzantine empire. Sometime in the 8th century, a Viking sat here, probably bored out if his mind and scratched his name ”Halvdan” into the marble.

In Venice, Italy there is a lion statue made of marble which has Viking graffiti on it. It didn’t use to be here, the lion statue was originally located at the harbor Piræus in Athens, Greece, but it was brought here as a trophy in 1687. Maybe it was a Viking who stood in Athens as a guard and scratched a message into the statue, but unfortunately, it has become unreadable with time since the Viking age.