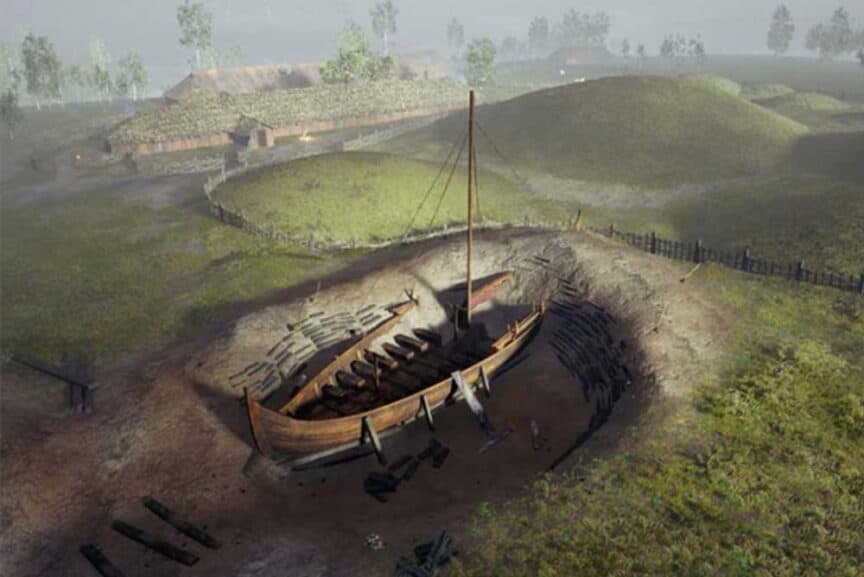 When the Gjellestad Viking ship was discovered in 2018, many people were excited that another piece of the puzzle from the past would be added to the picture. However, tests carried out in the summer of 2019 revealed that parts of the ship were slowly being eaten by a fungus.

According to one of the archaeologists, the ship was doing fine at the bottom of a burial mound until the 1880s when nearby farmers slowly began to chip away at the ancient mounds to create more cultivable soil.

Since then, the ship was slowly getting closer to the surface, and when some of the first dig samples were taken, it was less than a meter below the topsoil. Being so close to the surface increases the risk of damaging or destroying ancient artifacts.

In June 2020, the Norwegian government decided to come to the rescue and allocated about $1.5 million and gave them the green light to immediately start the excavation of the burial mound.

While this ship is an amazing discovery, do not get your hopes up, and think that it is as well preserved as the Oseberg ship. Judging from the pictures available to the public it looks to be in a similar state as the Ladby Viking ship in Denmark.

In the following months, a giant jigsaw puzzle labeled expert took place. The topsoil was systematically removed and bits and pieces from the ship were slowly uncovered.

Fragments of clinker nails, traces of mineralized wood, and a glass bead fragment were among the first objects to see the light of day since the Viking Age.

As the excavation unfolded it began to be very clear that the remains were more fragile than first predicted and they decided to place a giant tent above it, so they could conduct the excavation of the ship as gently as possible.

After a couple of months, the archaeologists had dug their way to the interior of the ship, and so far the most common find had been nails, nails, and nails. Some of these nails were so well preserved that it was possible to tell where on the ship they had been used.

The nail with the square plate is called a clinker nail, and they are used to keep two planks together by hammering it through them, and then fastened it on the other side. It is small finds like these, that help shipbuilders build ships that are as authentic as possible.

A thing that the archaeologists often look for when they are conducting an excavation of a burial mound is traces of a grave robbery. I wish it was not the case, but plundering and destroying burial mounds were quite common during the Viking Age. According to various Norse sagas, they even had a word for it (Old Norse: haugbrott) which means to break the mound.

At the Oseberg ship excavation, there were also found traces of grave robbers, and unfortunately there seem to be signs that this could also be the case for the Gjellestad ship as well.

To be concrete, it is the imprint of an ax discovered inside the remains of the burial chamber that has raised this suspicion. There are no signs of the ax, or that it has decayed with time, there is just an imprint of it left behind in the soil.

During autumn a nail with an anchor-shaped rove was discovered. This type of nail was according to the researchers most likely used to fasten the floor to the frame of the midsection of the ship, most likely at the port side.

At the end of 2020, the outline of the ship was fully uncovered, and the ship was measured to be 19.3 meters long and 4 meters wide, but due to decay, parts of the front and back were gone, so the ship could have been a bit longer.

While it is the Gjellestad Viking ship that is the star of this article, the surrounding area is just as important. According to the Norwegian Institute for Cultural Heritage Research “The three demolished mounds are just the tip of the iceberg. The GPR showed 13 burial mounds once existed at Gjellestad, some over 30 meters wide.”

The GPR data also revealed a nearby farmhouse, a large building, which is believed to have been a feast hall, and a third hall which may have been a pagan house of worship.

The wealth it would have taken to construct these buildings clearly indicates that this was not a place where the common folk lived, it was a place where political and social control of the areas was carried out.

The Jell Mound has been dated to the 5th century, so we know that the area has been in use for at least 1500 years. I wonder if there could be more great discoveries nearby, I cross my fingers.