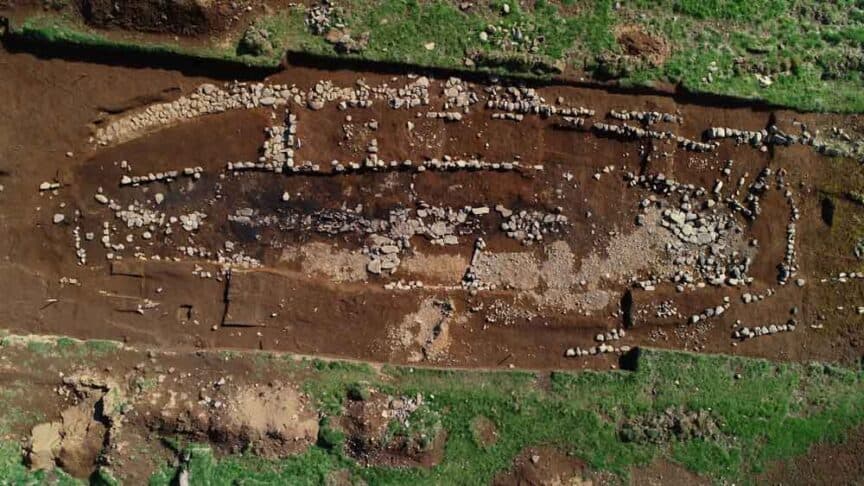 The two large longhouses that were discovered at Stöð, near the village of Stöðvarfjörður in the eastern part of Iceland, are pushing the settlement of Iceland back decades.

According to the book of the Icelanders (Icelandic: Íslendingabók). The settlement of Iceland has previously been thought to have taken place in 874 CE. When the first two settlers Ingólfur Arnarson and his wife Hallveig Fródadóttir sailed from Norway to the bay of Reykjavík to build their homestead.

But the oldest of these longhouses has been estimated to have been built at the beginning of the 800s. Which was long before the first Norwegians either left because of famine or fled prosecution from their king Harald Fairhair.

According to Bjarni Einarsson who was in charge of the excavations, “the longhouse was probably used as a seasonal settlement, probably during the summer months”.

It was most likely fishermen who came here to produce dried fish and hunt the whales. Birds such as falcons were also highly sought after, and if they could capture a few of them, they could earn a good amount of silver by selling them to wealthy people further south (Scotland, England, Norway, Denmark, etc.).

The oldest longhouse is one of the largest longhouses that has been found in Iceland, and there must have been a lot of people with different kinds of trades working there. Perhaps it was multiple families who came together to build it, or maybe some clan leader had been in charge of it.

In the westernmost part of the hall was the remains of a smithy discovered, the only one so far that has been found in a hall in Iceland. This means that there has been conducted some form of mining near this camp, and there could still be some evidence of it in the area.

The reason why the Vikings called it Vinland, was probably because they found an abundance of grapes in the area. Since grapes are used to produce wine, and Vinland literally means Wineland in all of the Scandinavian languages it was probably a fitting name.

But then again, it could also have been a marketing stunt, especially when we think about the name Greenland, which probably got its name to attract new settlers.

The younger longhouse has been dated to 874 CE, which does place it within the commonly accepted era for the settlement of Iceland. However, it was most likely not a farmstead for the average family.

According to Bjarni Einarsson, “it is hard not to conclude that it is a chieftain’s house”.

The excavation unearthed expensive luxury products, such as Roman and Middle Eastern silver coins, including cut and bent pieces of silver, often referred to as hack silver. Decorative glass beads, rings, weights, and a tiny fragment of gold.

“We often see this pattern of settlement of the islands in the Atlantic Ocean”. “First, we had the seasonal camps, and then the settlements followed” – Bjarni Einarsson.

This makes me wonder if this family or community traveled to Iceland to hunt and mine for riches decades prior to settling on the island. It is possible that these people were among the first settlers of Iceland, either voluntary or because of persecution from the Norwegian king.