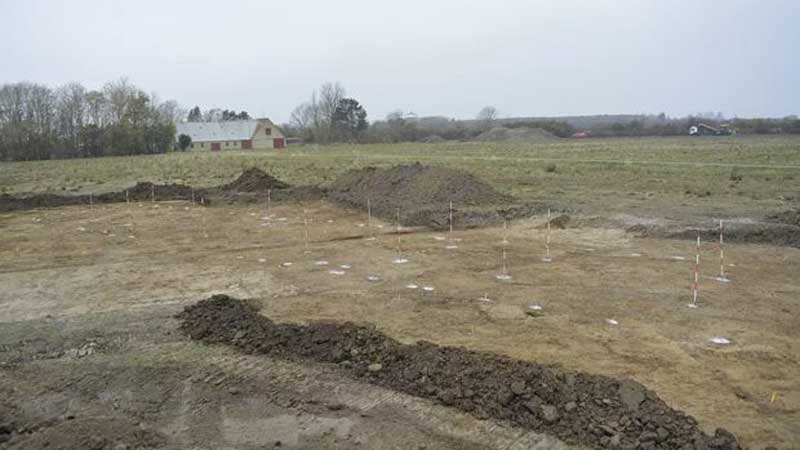 A tunnel that has been named Fehmarn Belt Fixed Link (Danish: Femernbælt Link) is currently being constructed between Denmark and Germany. One of the unexpected outcomes of this project is the discovery of a mysterious Viking hall at Rødbyhavn.

Great halls like these are normally tied together with the elite of the society such as rich families, royalty, or even a powerful religious force. But it is a bit of a mystery what this hall was used for, there are no signs that it was used as living quarters, or as a place of worship.

There would typically be discovered signs of workshops, houses, or something that would indicate the importance of the hall in the vicinity. There would also typically be found a lot of holes nearby that would have been used for disposal of garbage, but nothing like this has been found here.

The hall is one of the bigger ones that has been found, it was 49.5 meters long and up to 9 meters wide. It is larger than the ones found at Tissø and Fuglebjerg. However, the hall that was found and reconstructed in Lejre is still the biggest one that has been discovered to this date in Denmark.

The hall has not been built with the use of thick timber unlike other halls from the Viking Age, and it did therefore not have those curved walls that we are familiar with. According to the museum inspector Bjørnar Måge from the Museum of Lolland-Falster, it was most likely built with the wattle and daub technique. A building method that has been used across many cultures and societies for at least 6,000 years, and a method that is still used in some parts of the developing countries to this day.

The Viking hall could be seen from far away

The hall stood on a small hill of about 3.2 meters with a view over the sea. Even Though it sounds like a tiny hill, Lolland is a very flat piece of land, and it would have been visible from a long distance, perhaps also from the sea. The landscape of Denmark is in general very flat just like a pancake, unlike what some TV series would like you to believe.

There are some speculations that it was built as a party hall for special occasions, for the people who lived in the longhouses further down the hill.

But it is very unusual that a hall was located so close to the coast at this point in time. Halls were typically placed further inland, and away from vulnerable and sudden attacks from Viking ships or other unwanted visitors. This would have given the king enough time to gather his troops to defend his territory.

During the excavation, there was found quite a large amount of animal bones in the area, and according to the museum inspector, it is possible that the hall was used as a place for trade, for instance, with cows or sheep.

There are no visible signs that the hall was maintained, and it was only in use for approximately 30 years until it simply began to decay. Maybe it was a young entrepreneur who saw an opportunity and built the hall near the sea so he could make a living by selling livestock to the people across the sea.

Perhaps the demand for his livestock decreased as the years went by, or maybe he passed away with no heir to inherit his business. However, we might never figure out why this hall was built, we can only speculate about it, and imagine what happened in this area long ago.

So far it is only a third of the planned excavations from this area that has been investigated, and there could still be many more exciting discoveries hidden beneath the surface at Rødbyhavn.

It is not just the discoveries from the Viking Age that could be interesting. There have also been found traces of Stone Age people, quite literally in the form of footprints.