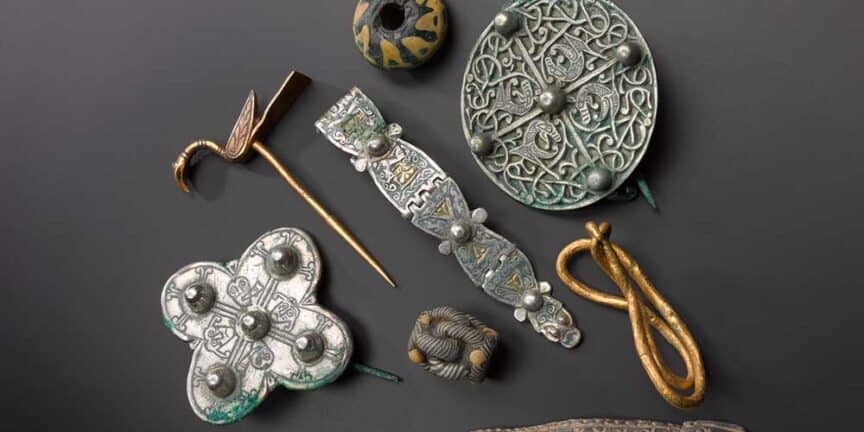 The Galloway hoard that was discovered in 2014 by a metal detectorist in a field in Dumfries and Galloway and acquired by the National Museums of Scotland (NMS) in 2017 has received a grant of 1.1 million dollars (£791,293) from the Arts and Humanities Research Council.

The grant will be spent on a three-year research project whose goal is to try and unlock the secrets of this Viking Age treasure. The Galloway hoard consists of more than 100 pieces that have lain undiscovered in the Scottish soil for more than a thousand years.

It is the richest collection of rare and unique Viking Age objects that have ever been found in Britain or Ireland, and according to Dr. Martin Goldberg, it is the great range of materials in this treasure that makes it so exceptional.

The Galloway hoard consists of objects made from precious metals, such as silver, and gold. Some of the jewelry that really should be highlighted because they are particularly unique and rare are the gold bird-shaped pin, the Anglo-Saxon disc brooches, and the Anglo-Saxon cross decorated with gold leaves and animals.

The treasure also contained textiles such as, leather, wool, linen, and a piece of silk which is the earliest example of silk in Scotland. These organic materials will be helpful to date and identify the origin of these objects, but it will also be possible to reconstruct the colors that faded from the fabric many centuries ago.

According to the National Museum of Scotland, the Galloway Hoard is currently being displayed in Edinburgh from the 29th of May until the 12th of September 2021. So if you are in the area, it could be a fun little day trip.

Personally, I look forward to the conclusion of their research, and to learn where each of these pieces originally came from, and how they once looked. There is just something about seeing ancient treasures being shown how exactly they once looked. Just like watching black and white videos that were recorded long ago, but now finally have been colorized. To me, it just feels more relatable when they are in color, and the gap between now and then seems to be just a little bit smaller.