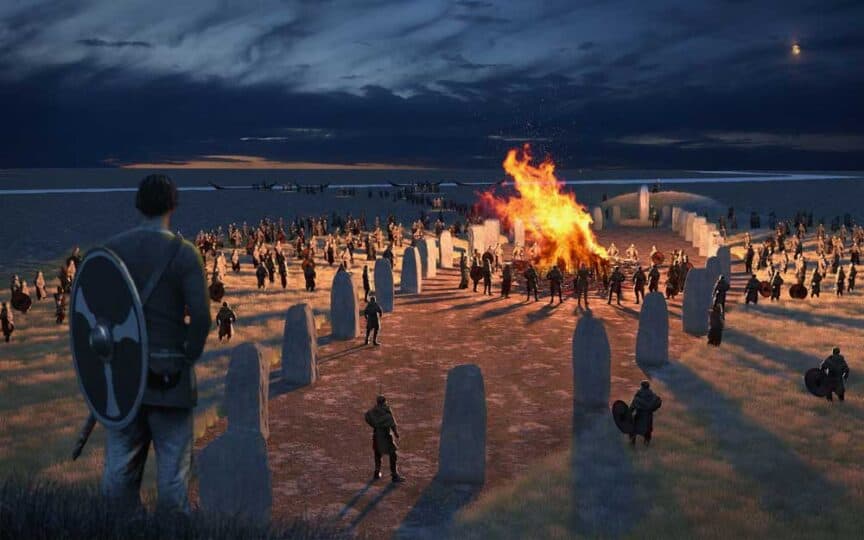 On October 8th, 2020, Jutland’s oldest stone ship burial monument at Høj Stene opened to the public. This monument is a reconstruction based on records dating back to the 17th century. According to the archaeologists from the Moesgaard Museum, some of the original stones from the ship setting were missing, so they had to figure out how exactly the stones were used to stand in the ship formation.

With the use of radar apparatus technology, they figured out how the ancient ship setting once stood. This was also confirmed when archaeologists found pieces of gold in the middle of the stone ship formation.

Based on this, we know that the ship setting was 80 meters in length and the stones had a height of approximately 2-4 meters.

Unfortunately, most of the gold had melted during the ritual due to the intense heat from the bonfire, but they were able to find small bits and pieces that had escaped the flames.

I find it very interesting that we have found some of the remains that were used during a ritual that our ancestors conducted in the late Iron Age fourteen hundred years ago (600 CE), it fills me with hope for what else we might discover in the future.

There were approximately 70 pieces of precious metal, of which 21 pieces were gold and the rest bronze. It is the artwork on the surviving bits and pieces of jewelry that has been part of dating the site.

We know that a ritual like this was only made for important and powerful people, perhaps it was a king or queen who ruled in the central parts of Jutland. Whoever it was, was sent into the afterlife with an abundance of riches.

It was at this point in history a new strong elite began to emerge in the north. An elite who had their royal seats in Lejre (Denmark), Uppsala (Sweden), and England. They were not related, but the Anglo-Saxon ship burial at Sutton Hoo, clearly shows that there were close connections across a vast territory. They often used the same symbols and had an almost identical decoration of their objects, for instance, the animal ornamentation.

Stone ship formations like the one at Høj Stene or real ship graves like the Oseberg ship in Norway, were a central part of funerals.

If you are planning to attend the Moesgaard Viking Festival, which is held every year on the last weekend in July. Then you should know that this stone ship at Høj Stene is only a short drive away, and it’s also a good excuse to burn off some of that sweet mead that you may have been drinking, while you explore the area where your ancestors once walked.