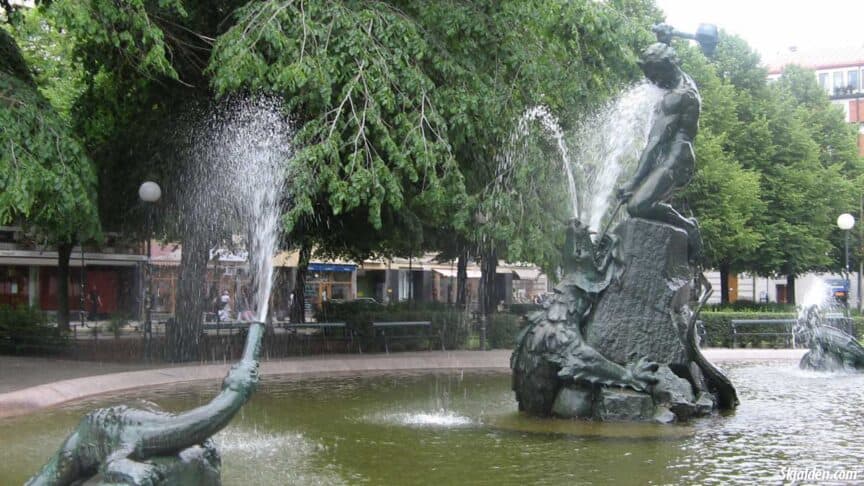 In Södermalm, Stockholm at Maria Square (Swedish: Mariatorget) is the Thor statue “Tors Fiske”. This group of bronze statues is standing in a fountain, and they are depicting Thor in the middle of the sea, slaying Jormungandr. The two other sculptures at its sides are two ancient lizards, spraying water from their mouths.

This masterpiece by the sculptor Anders Wissler was made as part of an entry into a competition which it won. They were erected in 1903 and immediately became very popular among the locals.

Anders Wissler had learned the art of fountain sculptures on his study trips to Versailles in France. He wrote in a letter back to Sweden, that they were magnificent, but he probably wouldn’t want to see them again.

Wissler made his artwork with its surroundings in mind, so the sculptures harmonize with the square. The loops of the marble basin, like the whole creation itself, go into the overall art.

The statue is based on the saga of Thor’s fishing trip together with the jötunn Hymir. In the final moments before the god was able to slay the serpent, Hymir who was struck with fear, cut it loose, and it escaped.

Thor would not have another chance to kill it, before the end of the world, which is known as Ragnarök in Norse mythology.