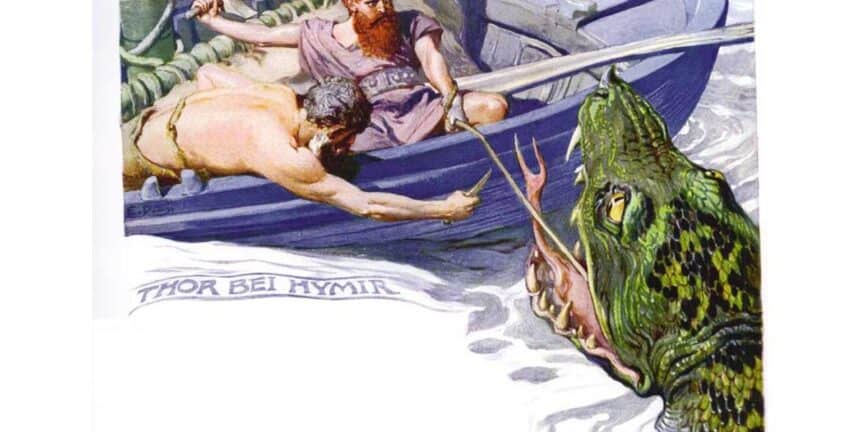 Many seasons ago, Thor went traveling alone disguised as a young boy. He traveled on foot from Asgard to Jotunheim which is the land of the giants. Thor arrived at Jotunheim in the late evening so he needed a place to stay for the night. And to his luck, he came by a house of a giant named Hymir, who welcomed him into his home.

At dawn, the giant got up and prepared himself to go fishing. When Thor saw this he quickly got out of his bed and asked the giant if he could come with him.

Hymir said; What help can I expect from you, you are so young and so small. You will probably freeze to death because I will row very far out on the sea.

Thor replied; I will not stop you from rowing far out to the sea, and it might as well be you who will freeze first.

Thor who is very ill-tempered had almost slammed his hammer into the giant’s skull. But calmed down because he wanted to use his strength elsewhere.

Then Thor asked the giant; Soo what sort of bait are we going to use?

Hymir replied; Go get your own bait little boy.

Thor went off looking for some bait until he saw a head of oxen belonging to Hymir. Thor caught the biggest ox and ripped off its head, and took it with him down to the boat.

Hymir was already sitting in the boat when Thor got down to the shoreline. Thor jumped into the boat and sat down towards the stern and took two oars and began rowing.

After a little while, the giant said; Ok boy, we are at my spot now. This is where I always fish.

Thor replied; let’s go further out, there are bigger fish out there.

15 minutes later the giant said; I think we should stop here, we are already very far out, and it is dangerous to go further out to sea.

Thor did not listen to the giant and kept rowing the boat further out to sea, which made the giant clearly worried and unhappy.

Finally, Thor pulled up his oars and began to prepare his line, he baited the hook with the ox head and threw it overboard, where it sank to the bottom.

A few hours went by, and suddenly something had taken the bait. It was the Midgard serpent, it had opened its mouth and swallowed the ox head. The hook had dogged itself into the gums of its mouth and the serpent moved back and forth in pain.

Thor stood up and used all his strength to get the Midgard serpent under control, but it pulled so hard that Thor’s feet were pushed through the bottom of the boat.

Thor slowly began to pull it up towards the boat when the head of the Midgard serpent emerged from the surface of the water, it was the most terrifying sight anyone had ever seen. Thor looked it right in its eyes and it stared straight back at him and began to spit poison after him.

At this point, the giant Hymir had crawled up in the corner of the boat. He had turned completely pale and was shaking in fear.

Just at this moment Thor grabbed his hammer and raised it into the air ready to kill the Midgard serpent. Hymir who still had the bait knife in his hand, cut Thor’s line and the serpent sank back into the sea.

But Thor threw his hammer after it, and some people say that he struck its head off, but according to Odin’s vision of Ragnarok, it is still alive. Thor angry at Hymir punched him behind the ear so that he fell overboard, and Thor went back into the land.