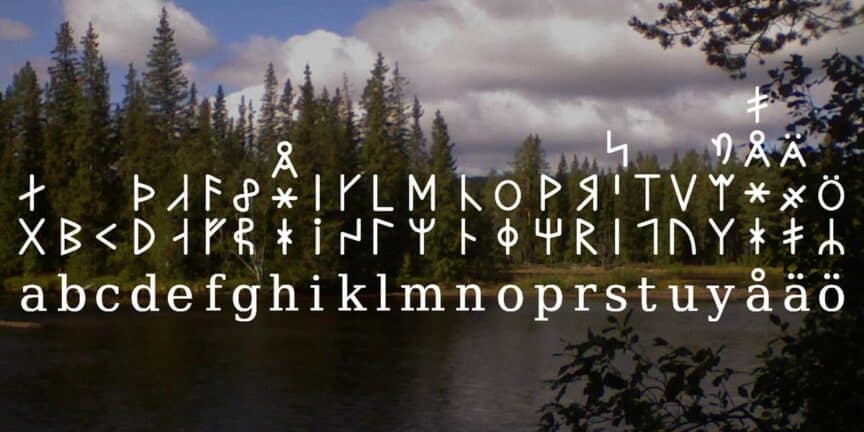 When most of us think about runes, we often think about the Vikings and something that was used a thousand years ago. But that could not be further from the truth because, in the west of Sweden, an isolated group of people has used runes up until the 20th century. They even have their own language, known as Elfdalian.

This group of people lives at Älvdalen at Dalarna in Sweden. Not many people live in these parts of Sweden, and only 2.500 people from the area still speak the language. These people could potentially be a big help to solve many of the open questions regarding runes and the old Norse language.

Elfdalian is an old Swedish language

Runes were used in Sweden and the rest of the Nordic countries until the Latin alphabet arrived peacefully with Christianity according to the mainstream news. And during the 14th century, the Latin alphabet had completely taken over the runes, but not in Älvdalen. The runes used at Älvdalen is probably the latest use of runes and might have evolved over time.

What I find strange is that Elfdalian that has been spoken in Sweden for a thousand years if not more, is not recognized as an official and independent language by the Swedish government. Surely this language should be recognized as an official and independent language since this will make the Swedes more aware of their past and therefore proud of their history and culture. The Swedish government has said that Elfdalian is just another Swedish dialect, even though most Swedes don’t understand the language, and let’s not forget they write in runes. Elfdalian sounds like a mixture of Faroese and Icelandic, but it is a unique language.

Because the Viking age ended almost a thousand years ago, most of the findings at the excavations have decayed or is not always in good condition. In Älvdalen they have written runes on buildings and furniture. But I was very surprised to find out that in Älvdalen they carved runes onto wooden sticks, to send messages between the farms in the area. A material like wood will easily decay, and if people from this isolated area in Sweden have done this for a thousand years, the people back in the Viking age might have had the same system to send their messages between them. Many of the traditions and folk culture from this area could be very old since they were so isolated from the rest of society.

While it might seem strange that a group of people could live isolated in Sweden for so long, it actually not that very surprising when we think about the landscape in Sweden. Sweden is a huge country 10 times bigger than Denmark, and it is even bigger than Germany. So traveling to or from this area would have been a big expedition. There were no roads there, and there were more than 100 kilometers (62 miles) of forests and mountains between them and the rest of the civilization. The only way there would have been by boat, and even that would not have been an easy journey.

The Swedes in Älvdalen used Dalrunes

The runes in Älvdalen are called Dalrunes, and they look somewhat similar to the runes used on the Jelling stones in Denmark. These stones are considered Denmark’s birth certificate and dates back to the year 965 CE. But the Dalrunes have developed through time, probably with the influence of the Latin alphabet. On the old runestones in Denmark, there were only used 16 runic characters, but there are 23 runic characters on the Dalrunes, which indicate that they probably have been inspired by the Latin alphabet.

If we, for example, take a look at the character for ”i”, it was written with a vertical line in the Viking age, but on the Dalrunes it is also written with a dot above it. This influence of the Latin alphabet probably dates back to the middle of the 19th century, when it was required for the children to attend school in Sweden.

Some of the unique features in Elfdalian is that it has more than 30 vowel sounds. And also a bunch of Nordic words, that have disappeared from the modern Swedish language. Elfdalian has preserved many of the old grammatical features, which has disappeared from the Nordic languages and reminds somewhat of the German language, where each word in principle can have multiple declensions.

People who still spoke Elfdalian in the 1970s were seen down upon, and if a child were caught speaking the language at school the teacher would hit them. This has fortunately changed in the last 15 to 20 years, and now people are proud if they are able to speak the language. There are even books being published and there are organized courses on how to speak it.

The Swedish government refused to recognize Elfdalian as a language

Älvdalen is a rural area and historically seen, they had no influence when it comes to politics. There has been shown no to little interest from the people in the cities and the elite to recognize the language from this group of people. Personally, I hope that it will change in the future, and this video is my small contribution to getting the knowledge out there for those who didn’t know about it.

What do you think? Should this language be recognized as a language be the Swedish government, or is it just another Swedish dialect? I have placed a video below, to a video with a song in Elfdalian, if you are interested in hearing how it sounds like.