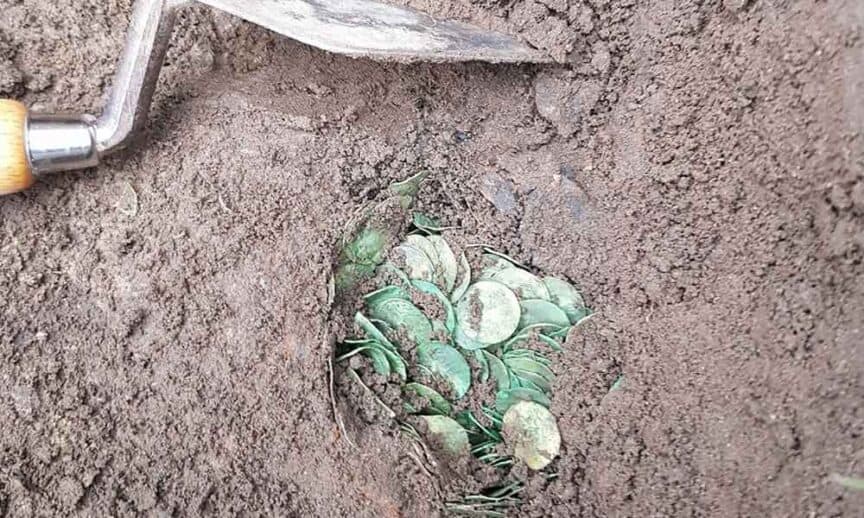 While some of us were spending most of 2020 expanding our waist size, a man named Claus Gundersen was walking around with his metal detector searching for ancient treasures on the isle of Fyn, in Denmark. When suddenly it made a high-pitched beep, excitedly he took his spade and began to dig at the spot.

At the sight of a big amount of silver coins peeping through the surface, he froze for a moment and had no idea what he should do. But he did the right thing, he stopped digging, marked the spot, and called the local museum.

During the day, a group of archaeologists uncovered two jars filled to the brim with approximately 700 silver coins dating back to the Viking Age, making it the second biggest Viking treasure to have been found on the isle.

Besides the coins, another thing that made this discovery so sensational was that there were remnants of a piece of cloth at the bottom of one of the jars. If this had been used to carry the coins is only something we can speculate about, but it is extremely rare to find textiles like a piece of cloth in such good condition.

Claus Gundersen had just begun using a metal detector during the summer because he has a huge interest in antiquity, and he had never thought that he would find a once in a lifetime discovery just a few months later.

It is anyone’s guess why someone buried the silver coins a thousand years ago. Was it a sacrifice? or were they stored here for a rainy day and did the person die before it could be collected again.

One thing is for certain, this is a substantial amount of silver, and whoever it belonged to must have been both wealthy and influential in the local society, or perhaps it was just a thief that never made it back.

A closer inspection of the coins revealed that they had been minted by Sweyn Estridsson, who was the King of Denmark from 1047 – 1076 CE. This has led the researchers to believe that the coins were buried here within this period of time.

There haven’t been found anything else from the Viking Age in this area before, but there could be more to be discovered. Because of that, the exact location of the discovery is a secret, at least for now, because they want to avoid treasure hunters with bad intentions from searching the area. All we know is that it was on a field near Brobyværk.

Findings like these are considered “Danefæ” which means that it belongs to the people. However, all treasures are compensated with a finders fee and a place in the history books.