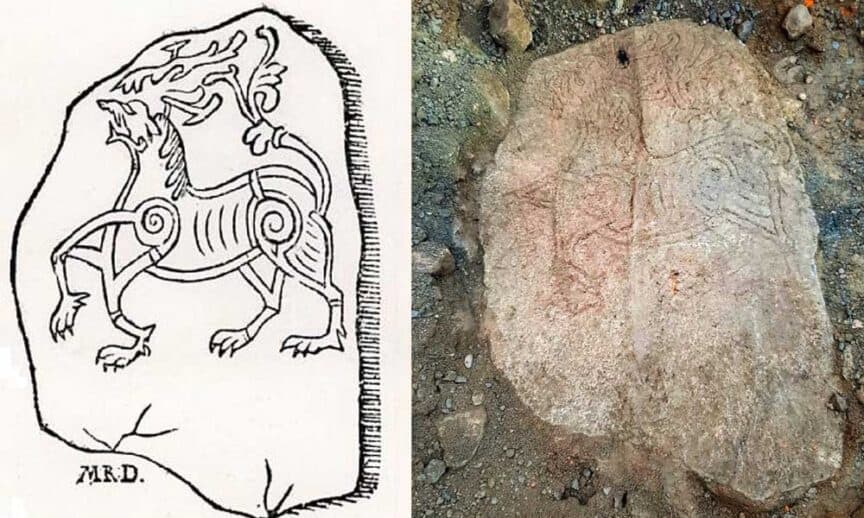 On the 16th of December 2020, near the city of Ystad, Sweden, a group of archaeologists found one of the long lost Hunnestad picture stones. This particular picture stone has been missing for more than 300 years, and many had given up the hope of finding it long ago.

The Hunnestad monument consists of eight stones and it used to be the largest and most famous Viking Age monument in Scandinavia. But during the 18th century, several of them disappeared.

The Hunnestad monument consists of three picture stones, and five runestones, and all of them have been dated to have been engraved between 970-1020 CE.

This newly discovered picture stone (DR 285) has an image of a large animal, perhaps it is Fenrir, but that is not certain. It appears to be in good condition, and there does not seem to be any visible damages to it.

My guess is, that when the researchers are finished studying the stone, it will probably be placed among the three others at the Kulturen museum in Lund.

Recovered Hunnestad Monuments in the museum

The three Hunnestad stones at the exhibition in Lund are listed in the Scandinavian Runic-text Database (rundata catalog), as DR 282, DR 283, and DR 284. DR is a country code for Denmark, including the former areas, Skåne, Halland, Blekinge, and Southern Schleswig.

The inscriptions on the stones have been written in younger futhark and the art is Ringerike style. This art style was common during the 10th and 11th century in Scandinavia.

The Hunnestad monument DR 282 has a depiction of an ax-bearing man in the center of the stone and above him, there is an inscription. It is possible that the man is one of the vanguards, a group of elite Viking warriors who were hired to fight for the byzantine empire. If it is, then this stone was raised in the memory of two of them.

In English: Ásbjǫrn and Tumi they placed this stone in memory of Hróir and Leikfrøðr, Gunni Hand’s sons.

The Hunnestad monument DR 283 has a depiction of a cross and an inscription. Tumi who raised the previous runestone together with Ásbjǫrn had passed away, and therefore Ásbjǫrn raised this stone in memory of Tumi.

In English: Ásbjǫrn placed this stone in memory of Tumi, Gunni Hand’s son.

The Hunnestad monument DR 284 has a depiction of a woman riding an animal, perhaps a wolf, while using two snakes for reins. It is possible that it is the wolf-riding giantess Hyrrokkin who helped the Aesir to push Balder’s ship into the sea during his funeral.

The Hunnestad monument DR 286 has a depiction of what is believed to either be a lion or a wolf with an open mouth towards a mask. The inscriptions and depictions on the rest of the missing Hunnestad stones are unknown.

According to Ole Worm, who wrote the book Danicorum Monumentorum (Danish monuments) in 1643. The monument is located near Hunnestad, on a private road that runs from Hunnestad village to the east. A road that previously continued via a crossing (Swedish: Vadställe) through Rosbäcken and up to Lundavägen towards Bjäresjö kyrkby.

On a survey map from 1745, there is a field with the word runestone upon it (Swedish: Runestensåkern). The field is located southeast of the village, just a few hundred meters from the easternmost farms.

According to the local farmers, the monument was demolished at the end of the 18th century, when the Swedish nobleman Eric Ruuth, decided to conduct extensive renovations at his estate Marsvinsholm Castle.

If the rest of the runestones are to be found, then it will most likely be in this area. They are either lying somewhere in the soil, or they have been used as building materials for the castle long ago, and if that is the case, they are probably lost forever. However, I hope they are still somewhere in the vicinity.