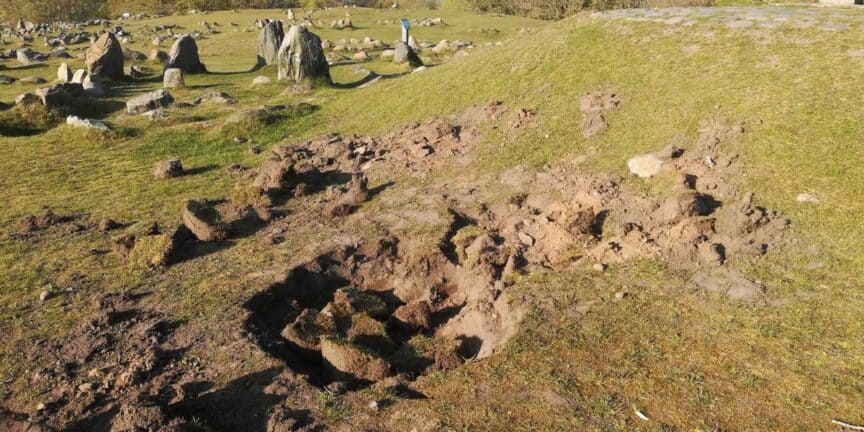 During the festive Easter holidays, a celebration that is not only important to the Christians but also to the heathens, one of Denmark’s most known ancient monuments was vandalized. This site which is called Lindholm Høje is located in northern Jutland next to the city of Ålborg.

While many of us sat around the easter table and enjoyed our meal and the company of our friends and family, one or more unknown persons dug several holes of 30-40cm into this ancient site. If they were looking for treasures or just wanted to ruin the site is unknown.

This disgusting vandalism against our heritage was discovered by a group of visitors and the staff of the Lindholm Høje Museum on Easter Monday.

The incidence has been reported to the local police, but the chances of catching the people responsible are probably very low, and the museum is left behind with a bill of 100.000 Danish kroner to repair the damages at the site.

If there is anyone out there with a mindset like this, that sits and listen to this. Then you should know there is absolutely nothing to discover at these sites since the archaeologists already have been here many times.

What is Lindholm Høje?

This archaeological jewel is of very high historical importance and it really is a window into the past, a past that still hides many secrets in the shadows of the runestones.

At Lindholm Høje there has been discovered 682 graves and 150 stone ships, which are spread throughout the landscape. This outdoor exhibit is the host for thousands of visitors that have the privilege of walking among the stones that our ancestors placed here more than 1000 years ago.

Lindholm Høje dates back to the beginning of the Germanic Iron Age which began around 400 CE, and to the end of the Viking age in 1066 CE.

This site was completely covered in a thick layer of sand at the end of the Viking age until it was discovered in 1889. This layer of sand helped to preserve the unique stone ships and the other bits and pieces that were discovered.