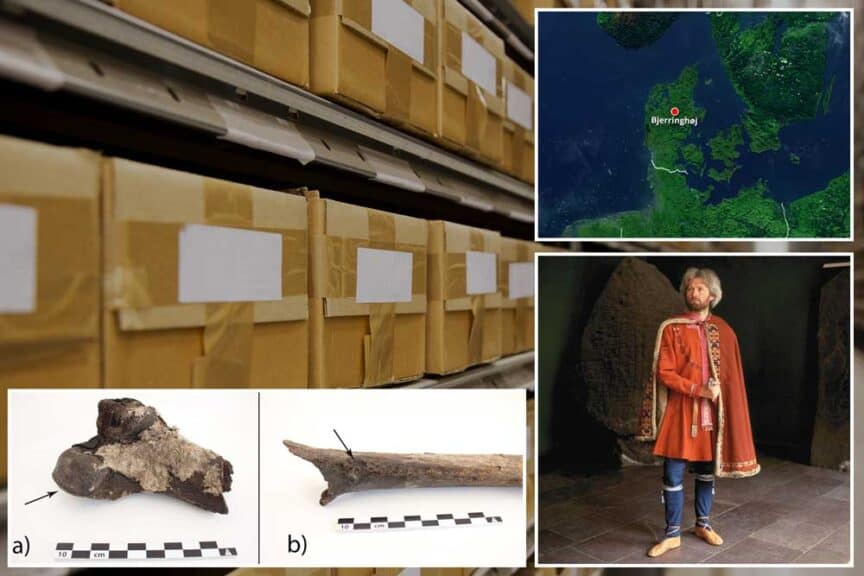 It is not every day that someone finds a box full of human remains, but that was exactly what happened recently when a researcher from the National Museum of Denmark found a box stashed away in the basement.

The contents were immediately sent to the laboratory for testing, and it turned out to be the remains that were discovered at the Bjerringhøj burial mound in 1868. What is so special about this rediscovery is that these remains have been missing for more than 100 years. This kinda makes me wonder, what else is down there.

It is careless to misplace a box full of human remains, but we are actually very lucky that we even have them to begin with because the excavation was not conducted by archeologists, but by local farmers.

The burial mound was discovered in 1868 when Laust Pedersen Skomager and some of the local farmers were in the process of shoveling dirt onto wagons so they could flatten one of his fields.

The rumors of the discovery began to spread like rings in the water, and it was eventually picked up by Arthur Feddersen at the Cathedral School in Viborg who immediately traveled to the site in his eagerness to satisfy his curiosity.

To his dismay, he saw that the grave had been treated carelessly, and fragments of textile, clumps of down feathers, and human bones had been scattered around the grave. In the following days, he interviewed the farmers and began to collect the objects so they could be sent to the National Museum of Denmark in Copenhagen.

The farmers were not punished for their theft, but it is a crime to keep findings like this for yourself in Denmark. All objects from the past that are found in the soil, especially rare metals, belong to the people, and it does not matter if they are found on public or private property.

The burial chamber was dated to have been built around 970-971 CE, so we are quite certain of when the individual passed away. The chamber was made from wood and sealed with blue clay. Within the chamber was a coffin made of wood, where the deceased had been positioned on a layer of down feathers, this could have been some sort of mattress.

He was dressed in fancy clothes and two iron axes were placed near his feet. On top of the coffin was a 0.57m-long bee’s wax candle. Placing a candle on top of a coffin is not a pagan tradition, and this could indicate that the burial was some kind of a combination between the old and the new traditions.

You may or may not have heard about the Bjerringhøj burial mound, but chances are that you have seen objects that have been inspired by some of the findings. The burial mound was located in the small village of Mammen, and this name has been applied to all of the unique patterns that were discovered at this location.

The Mammen grave is one of the most famous burial mounds that have been found in Denmark, and the grave has added a wealth of knowledge to our understanding of Viking society.

But it is probably the axe that has become the most recognized finding from this burial mound, and you may even have the Mammen axe in the form of a pendant around your neck at this very moment.

The Mammen axe is made of iron, and it is decorated with a silver inlaying, and it is these patterns on this axe that has birthed the term Mammen style. We have to keep in mind when we are looking at objects from the past, that Nordic art was constantly evolving during the Viking Age. Objects such as jewelry, weapons, tools, and clothes are based on techniques and an art style that were invented and adjusted over hundreds of years.

The Mammen axe is quite unique because the depictions can be interpreted as being both Christian and Pagan. On one side it has a depiction of a tree that either symbolizes the world tree Yggdrasil, or the Christian version of the tree of life from the book of Genesis.

On the other side, there is an animal figure which looks a bit like a rooster. This could possibly be the rooster Gullinkambi that lives among the gods in Asgard. Every morning this rooster is crowing so loud that all of the brave warriors in Valhalla are being awakened for a new day. This is also the rooster that will warn all of the gods and goddesses when Ragnarök is about to begin. Some people have speculated that this could also be a Phoenix which is the Christian symbol of rebirth.

While an axe like this is an astonishing discovery, it is actually the textiles that were discovered at Mammen that are in my opinion a lot more valuable. Because the chances of finding textiles that still have visible patterns and traces of dye are extremely rare.

The textiles from Mammen

The researchers have concluded that the human remains may have been from a male, but it is solely based on the clothes that this conclusion has been drawn because we actually do not know.

Most of the bones were missing when the grave was excavated in 1868, and, therefore it is not possible to determine the sex of the individual. Typically a DNA test would be conducted with the use of teeth or the petrous portion of the temporal bone, but both of them are missing. But, in theory, DNA analysis could still be conducted by using the bones, but they are in such poor condition that there is a high risk of contamination from external DNA.

So for the moment, with our current technology, it can only be concluded that it was an adult, possibly a male of more than 30 years of age, along with a second, and younger individual, possibly a female.

The clothes were badly damaged, and because no record was kept while conducting the excavation, the researchers are quite uncertain of how the clothes may have looked, but they have made a qualified guess.

According to the researchers, the man wore a woolen tunic and had blue breeches. For the outdoors, he had a red woolen cape lined with marmot fur. Both the tunic and the cape were embroidered with detailed patterns of leopards, four-footed animals, bird masks, and acanthus leaves in shades of red, blue, and yellow.

Many tablet-woven bands were also found in the grave, some were made of lilac wool and others of lilac silk with interwoven gold and silver thread.

The embroidered wool textiles in figure 7 were radiocarbon-dated in 2009, and it was estimated that it was made between 892-993 CE, which would place it to around the time of the Jelling dynasty. There is no description of any female clothes from this grave, it is possible that they were already decayed at the time of the excavation.

It is the visible patterns on pieces like these, that have made this discovery one of the most important ones in Denmark. The complex design and the material used clearly indicates that this was a wealthy person who was part of the elite. Some researchers have even suggested that he could have had close ties to the famous Harald Bluetooth who most likely lived during the same period.

A description of an outfit like this will hopefully dispel the Hollywood myth of how the clothes looked in Scandinavian during the Viking Age. We know for a fact, that the Vikings loved colors, and there have been found plenty of examples of this from various excavations across Scandinavia. A wide range of colors was used for their clothes, ships, and even their houses. Yes, they even painted their houses to show everyone that they had plenty of wealth, and they did not look as they have been portrayed in TV series like the Vikings.