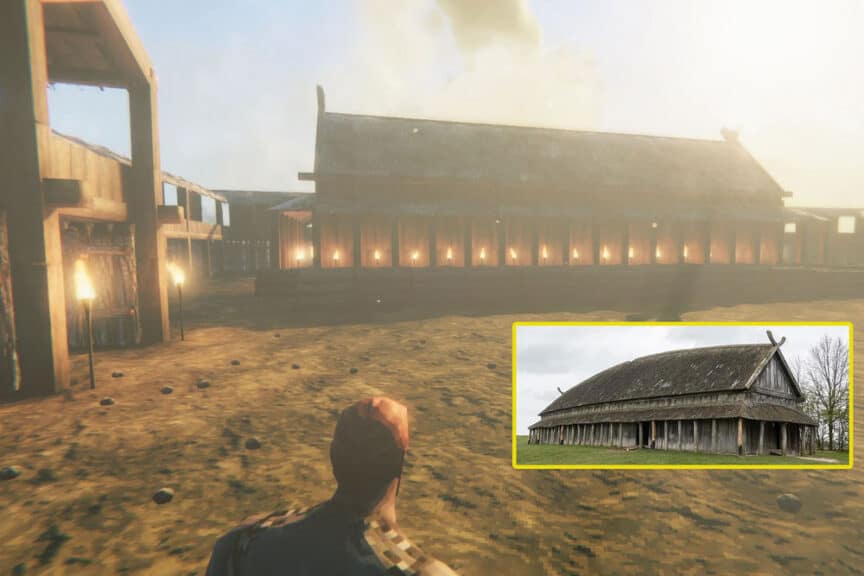 In this article, I will show you how to build the first reconstructed Viking longhouse in Denmark, but before that, I just want to share the history of the longhouse.

The longhouse is located next to the ring fortress named Trelleborg just outside of the city of Slagelse in Denmark. It was erected between 1941-42, and it is one of 31, possibly 32 types of halls that stood at Trelleborg during the Viking Age.

These longhouses were not used as living quarters for regular families, but instead, they functioned as barracks to house the army of King Harald Bluetooth.

In total, there have been discovered seven Viking ring fortresses that have been dated to around 980. Their purpose is unclear, there have been many speculations about their purpose, and one of them is that they were intended as a defensive structure against the Holy Roman Emperor, Otto II, who had previously attacked Dannevirke on the southern Danish border in 974.

But why the fortresses were built across Denmark, when the threat just seemed to be on the borders of the peninsula of Jutland, makes some historians wonder. But it is possible that they wanted to be able to defend all of the key areas in case of an invasion by the sea.

Large armies from Denmark and Norway may have been moved south to protect the border for a number of years to defend the Scandinavian home lands. Many areas would have been drained from its warriors, and because of that, the locals needed some kind of fortification that could be defended with a smaller army.

We know that the Trelleborg Viking fortress has seen battle around the time they were built, there are signs of war, in the form of burnt down buildings, and buried warriors nearby.

Valheim – Choose the location for the perfect base

Before we begin building, let me ask you this, have you chosen a spot for your base? If not, then I would like to suggest that you find a hill, preferably next to a lake that is connected to the sea, so you can have your ship nearby for the journeys in the future.

The Vikings loved to build their houses on hills to show everyone that they were powerful and rich. Longhouses could often be seen from far away, and the huge and majestic structures would impress anyone who passed by.

You have to imagine that the houses were painted white with patterns in many of the colors from the rainbow bridge Bifröst. Right now, that is missing in Valheim, I would like to see that Valheim gets wood-colored dyes in the future because as of right now, the houses look naked.

As you can see, I have made a Viking-inspired palisade around my base. I tried to use round edges, but when it rained it the wood got damaged. So instead, I just made them square until I could figure something else out.

As I said, it is Viking-inspired, because it has similar traits as the palisade around the ring fortresses, so it is somewhat of a copy. I found it to be very useful to stand and shoot arrows down at the beasts when the forest was moving towards my turf.

If we take a brief look inside the longhouse that we are going to build. You can see that in the middle of the building is a fireplace for cooking and heat, and the beds are placed along the walls next to it.

The reason why it looks so empty right now is that I don’t really have that much decoration right now. I could have put some of the trophies up on the walls, but I didn’t really feel like eyes staring at me while eating my dinner

Before we start building, remember to flatten the ground with a hoe, so the longhouse can stand on a flat surface, better to do it now, than have to deal with it in the future.

Putting up the frame of the Viking longhouse.

The bottom frame of the house is completed.

You can add an additional entrance at the side of the longhouse, I haven’t done it, because I didn’t really like it. It could work if the house were going to be longer.

For the roof, you need to use the 45-degree roof tiles.

Use the 26-degree roof ridge tiles for the center.

You can split a part of the longhouse into a small section, it would be a nice place for horses if and when they are added to Valheim.

Inside the longhouse, I have placed four campfires, with two cooking stations above the two in the middle. You have to remove four wood tiles in order to place the campfires.

Next to the fire, there are six beds, that can be used for rest and spawn points.

You can hide the straws from the roof, by placing wood beams over them, as a bonus it actually looks great.

There was used approximately 1400 wood to build the entire Viking longhouse. I would recommend watching the video above in order to see all of the steps in detail.