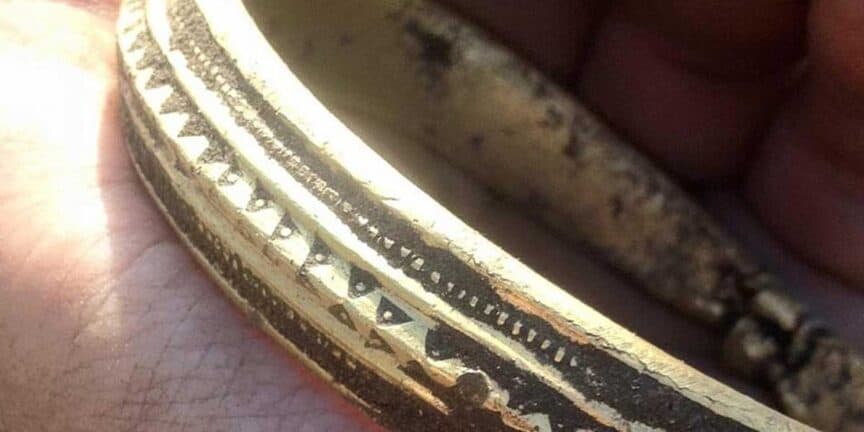 The three Danish amateur archaeologists, Marie Aagaard Larsen and her husband Kristen Nedergaard Dreiøe and their common friend Poul Nørgaard Pedersen went for a treasure hunt on a warm summer day, to a field in Vejen municipality with their metal detectors. Vejen is in the region of Southern Denmark on the Jutland peninsula. This was not just some random field they chose to search, because in 1911 someone found a gold chain in exactly this field.

This day would turn out to be the luckiest day in the life of the three amateur archaeologists because shortly after arriving they found seven Viking artifacts. One bangle in silver and six bangles in gold, dating back to the 9th century. The six gold bangles weigh 840 gram and the silver bangle weighs 160 grams. Just like the gold chain that was found in 1911, these bangles are made in the style called Jelling-style.

This makes the archaeologist Lars Grundvad who is also the curator of the museum in Vejen, to believe they are all apart of the same Viking treasure. Lars Grundvad says that this is a very rare find and he doesn’t think that this will happen again for many decades. The amateur archaeologist Marie Aagaard Larsen says that the treasure hunt is far from over, even if her luck does not repeat itself again. The Viking treasure has now been sent to the National Museum in Copenhagen, to be closely studied and evaluated so the three amateur archaeologists can get their finder’s fee.