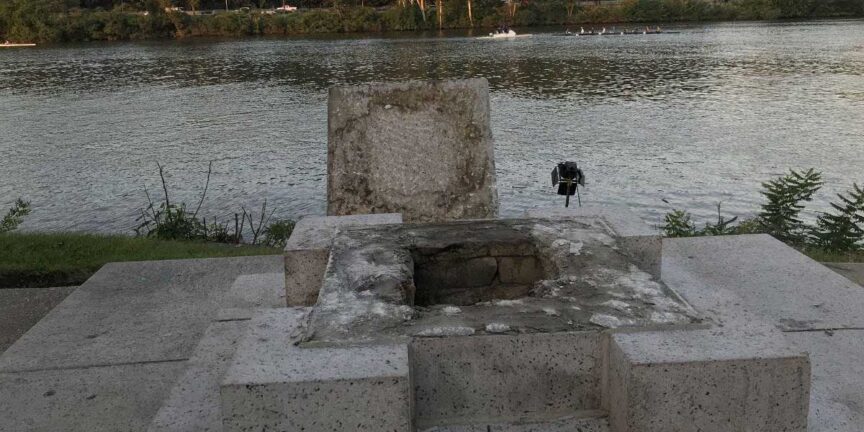 In the middle of the night just after 2 a.m on the 2nd of October, 2018, 6-7 members from the terrorist organization known as ANTIFA gathered around the statue of Thorfinn Karlsefni in Philadelphia, USA. They were not there to appreciate the history of a Viking explorer but instead, they wanted to erase the memory of Thorfinn Karlsefni.

Definition of a terrorist organization: Unlawfully using violence and intimidation, especially against civilians, in the pursuit of political aims. – Oxford Dictionaries

They decapitated the statue and then tied a rope around the statue and dragged it into the Schuylkill River next to the pedestal. The statue has been standing here for nearly 100 years since 1920 and watched how the city slowly grew around it.

Bjarni Herjólfsson was the first person to see America in 986 CE, but he did not sail to the shore to explore this strange new land, instead he turned his ship around and sailed back to Iceland. Leif Erikson traveled to North America about 15 years later, together with a small crew and spend 2-3 winters there, but did not make any permanent settlement.

Thorfinn Karlsefni (Old Norse: Þorfinnr Karlsefni Þórðarson, Icelandic: Þorfinnur Karlsefni Þórðarson) was the first non-native settler in America. He traveled to America, by following the route of Leif Erikson around the years 1005-1010 CE. Thorfinn made a small settlement on the northern tip of the island of Newfoundland, at the spot which today is called L’Anse aux Meadows.

Thorfinn Karlsefni statue has been vandalized before

It is not the first time that the Thorfinn Karlsefni statue has been vandalized by the extreme left wing in the USA. In 2017 the statue was spray painted with anti-Nazi language and an anarchist symbol.

The Leif Erikson statue in the Rose Garden in Duluth, Minnesota was also vandalized in 2017. And someone had been spraypainted a black line on the base of the statue that says, “Discoverer of America,”.

It makes me wonder why someone would target the history of the Scandinavian minority in the USA. Is this a case of Norseophobic? And why is this crime not investigated as a hate crime?