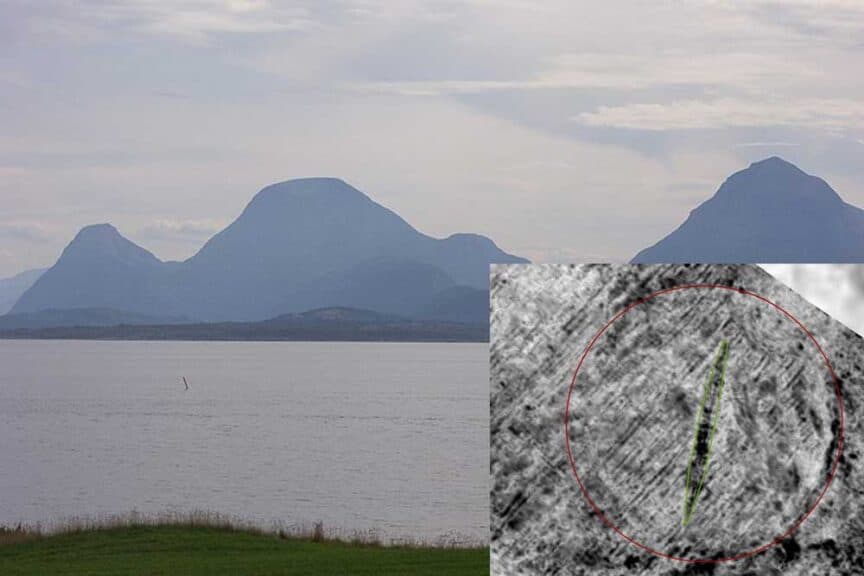 The rabbit development in georadar technology has in the last couple of years resulted in an increasing amount of discoveries from the Viking Age. In September 2018, a group of archeologists from the Norwegian Institute for Cultural Heritage Research (NIKU) were using this technology to conduct a survey on the island of Edøya in western Norway.

The results had looked promising, so they decided to go back one year later, and expand the area of investigation around the Church, however, nothing turned up on the scans.

According to Dr. Manuel Gabler “We had actually finished the agreed-upon area, but we had time to spare and decided to do a quick survey over another field. It turned out to be a good decision.”

The images from the georadar revealed a circle of approximately 18 meters in diameter, with a distinct shape in the middle of it, that could only be a Viking ship. Just as the Gjellestad Viking ship that was discovered in the municipality of Halden in the eastern part of Norway, this ship was just below the topsoil.

The highlighted circle around the ship indicates the borders of the burial mound. The reason we are still able to see it after so many years is because these mounds were artificially made, and that is still visible in the images.

According to the archeologists, it appears that the fore and aft stern has been destroyed by a plow. However, the keel seems to indicate that the ship could have been between 16-17 meters long.

Since this is still an ongoing investigation, the age of the ship has not been concluded. But it is estimated that the ship dates back to between the 5th and 11th century, which would mean the ship has been here for at least a thousand years.

In the vicinity of the ship, there are traces of a settlement. If these buildings were built around the same time as the burial mound is still too early to say. But if we look at the one in the corner, it seems to have the classical shape of a Viking longhouse.

The georadar also showed a faint circle of another burial mound just above the first one. If there also are some remains to be found there is still unknown. We will know more when they conduct the excavations.

More to be discovered on Edøya

Because of this discovery, the researchers at NIKU are now planning to conduct more surveys on Edøya and the surrounding area. Personally, I think there is a lot more to found in this area, especially when we consider how important these islands used to be. This is not just a random area, this could be considered the heart of Norway.

English:  Þórir and Hallvarðr raised this stone in memory of Ulfljót … Christianity had been twelve winters in Norway …

The inscription on the stone has been written with the runic alphabet younger futhark, which was the alphabet that was used in the Viking Age. The discovery of the Edøy ship, the small settlement, the Kuli stone, and the knowledge of Harald Fairhair having two huge sea battles nearby, could indicate that this is indeed the birthplace of Norway.

I have no doubt in my mind that this area has a lot of unclaimed secrets, just waiting to be found. This will definitely not be the last time that we will hear the archeologists discover something in this area.