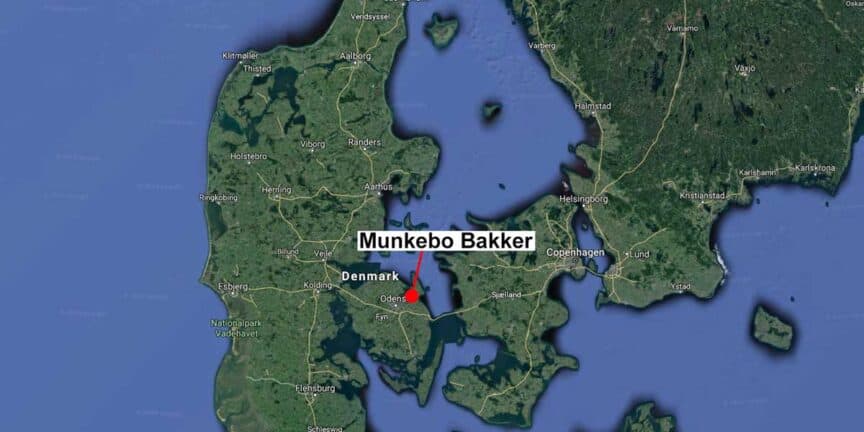 It seems that we are at a point in time where the soil in Scandinavia, keeps giving us new knowledge about the Viking age. A knowledge that has the potential to fill in the blank pages of our history books.

On the beautiful island of Funen (Fyn), at the highest point, known as Munkebo Bakke, the archaeologists have found a giant Viking hall that dates back more than 1.000 years, to around 825 – 1.000 CE.

According to the East Funen museum experts, this giant Viking hall, is so big, that there has never been found anything like it on Funen before.

This Viking hall is 28 meters long and 10.5 meters wide and surrounded by a big palisade. There is no doubt that this building has required a lot of manpower, and many resources to built.

But there was also found other houses next to the Viking Hall, two workshops, and three big longhouses and a smaller building which is still unknown what it was used for. This Viking settlement at Munkebo Bakke has many similarities with other places from the Viking age in Denmark, such as the villages at Lejre, Tissø, and Erritsø.

These buildings at Munkebo Bakke might not have been an ordinary village, but it could have been of strategic importance. Because they were built on top of a hill (Bakke in Danish means Hill), with a clear view of the two fjords, Kerteminde fjord, and Odense fjord.

From this hilltop, it is possible to observe all the ships sailing to and from the nearby villages, and the people who stood guard here would easily have been able to tell friends and foes apart. However, It is unknown if these houses were built for this purpose.

It was probably a very powerful person, or maybe even a Viking King, that ordered this settlement to be built. If it was a King, it could have been built by the orders of the King that was buried at Ladby, since he controlled these parts of Funen.

However, the excavations suggest that the buildings were abandoned in the year 980 CE, when the Viking fortress at Nonnebakken in Odense was built, by the orders of King Harald Bluetooth.

But we are still in the early stages of this excavation, and we have to wait and see, what the results from the samples, that the archaeologists have submitted for further analysis, will tell us. Then we will be able to pinpoint exactly when the buildings at Munkebo Bakke were built.